xxxxxBoniface VIII became pope in 1294 and was determined to assert his authority over secular rulers in general and Philip IV of France in particular. In 1296 his bull Clericis Laicos forbade monarchs to impose taxes upon their churches - though later he was obliged to modify that ruling - and in 1301 he suggested a meeting in Rome to reform the French system of government. But the crunch came with his Unam Sanctam, a bull of 1302 claiming that he had absolute authority over all rulers in temporal as well as spiritual matters. This was too much for Philip. In 1303, with the aid of his supporters and enemies of the pope in Italy, he had Boniface put under house arrest. He was released within a few days, but this humiliating incident doubtless contributed to his death three weeks later. And it proved a turning point in the conflict between Church and State. Papal claims over secular matters had been seriously weakened. 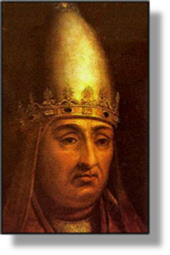 xxxxxBenedict Caetani was born in Anagni in about 1235. After studying law in Bologna he held appointments in the papal government and also served in the embassies of France and England. He was appointed a cardinal in 1281 and in 1294 succeeded the incompetent Celestine V as Pope Boniface VIII.

xxxxxHis pontificate is best known for the bitter and running quarrel he had with the king of France, Philip IV, though his relations with Edward I were far from happy at times. Like other popes before him, Boniface was determined to assert the absolute authority of the papacy in all things. In 1296, aware that both Philip and Edward were imposing illegal taxes on their Churches, he issued his bull Clericis Laicos, forbidding such taxes without the pope’s consent. Because of the strong opposition this aroused, plus unrest at home, he was obliged to compromise on this ruling, allowing “voluntary grants” for purposes of defence. In 1301, however, after Philip had imprisoned one of his bishops, he accused the French king of exceeding his royal powers and suggested a council meet in Rome to reform the French methods of government! And he then followed this up in 1302 with his famous bull Unam Sanctam, boldly claiming that the pope had supreme authority over all rulers, in temporal as well as spiritual matters. 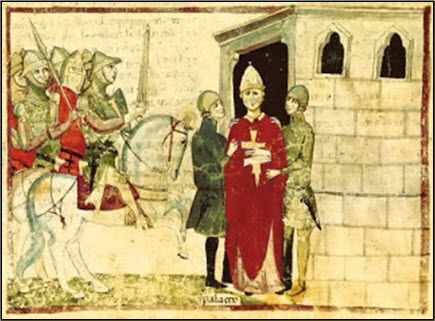 xxxxxThis was a step too far for Philip IV. He ignored the papal bulls, accused Boniface of heresy, and took steps to depose him. In 1303 his supporters, aided by enemies of the pope within Italy - notably members of the powerful Colonna family - made Boniface a prisoner in his home town of Anagni (illustrated). He was not held captive for long - probably no more than a couple of days - but it seems that on being arrested he was slapped in the face by a member of the Colonna family - the so-called “Outrage or Slap of Anagni”. Certainly the ordeal proved too much for him, and he died in October, just three weeks after his release.

xxxxxBoniface VIII, like many popes before him, attempted to uphold the power and prestige of the papacy, but his blunt assertion of its secular power carried little weight, and his capture in 1303 was both degrading and humiliating. In fact, his pontificate was a turning point in the long and bitter struggle between church and state. From now on, the growing power being wielded by national monarchs was to prove a serious barrier to papal claims of supremacy in matters of state.

xxxxxIncidentally, a large number of statutes were erected in his honour, either by Boniface himself or by others, and several have survived. It would seem that whilst he failed to enhance the actual power and prestige of the Pope during his pontificate, he did manage to increase its future stature. Looking at the surviving statues, it is evident that the height of the papal tiara was notably extended and the number of crowns around the tiara was increased from one to two.

xxxxxDuring the political conflict between Boniface VIII and Philip IV, a powerful defence of the pope’s stand against the French king was made by Giles of Rome (c1243-1316), an Italian scholar and philosopher. In his work On Ecclesiastical Power, written in 1301, he strongly argued that the pope, as the direct representative of God, has complete control over all of mankind. Born in Rome in about 1243, Giles was one time leader of the Order of the Hermit Friars of St. Augustine and archbishop of Bourges in France. He wrote many learned works, including commentaries on the Bible and the writings of Aristotle, including his De Regimine Principum. He died in Avignon, France, in 1316.