xxxxxThe independence of the petty and city states which once made up today’s Switzerland was threatened in the 13th century. In 1273 the Habsburg emperor Rudolf, anxious to control the St. Gotthard pass from the Rhine to Lucerne, took under his control three of the forest cantons. In 1291 these three formed an alliance known as the Everlasting League, and this proved to be the beginning of the Swiss Confederation. Over the years other cantons joined and, as we shall see, despite opposition from the Austrians and Burgundians, this independence movement eventually met with success in 1499 (H7). The famous legend about William Tell, alleged to have taken place in 1307, may well have played a part in these early moves towards self-government. 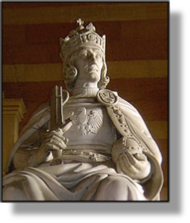 xxxxxMost of what is Switzerland today came under the rule of the German-dominated Holy Roman Empire during the tenth and eleventh centuries, but the collection of petty states and small city states that made up this area retained much of their independence. Then in 1273 Emperor Rudolf I of the Habsburg dynasty (illustrated), anxious to gain complete control of the St. Gotthard pass leading from the Rhine to Lucerne, took direct control of the so-called forest Cantons (or small states) of Uri, Schwyz and Unterwalden, all situated around Lake Lucerne. 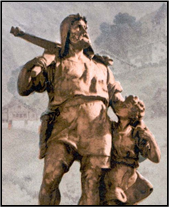 xxxxxAlarmed by this direct intervention and the threat it posed to their coveted independence, opposition steadily grew, and in 1291 the three cantons entered into a defence alliance known as the Everlasting League. This pledged “eternal” mutual assistance against all enemies and was, in effect, the foundation of the Swiss Confederation. A few years later Luzern, Zurich and Bern joined the alliance, and the remainder followed over the coming years. Many attempts were made by the Austrians, Burgundians and others to throttle the new nation at birth, but the independence movement grew, ably protected by the mountainous terrain, and, as we shall see, eventually led to an independent Switzerland in 1499 (H7). The legend about the archer William Tell (illustrated with his son), which allegedly took place in 1307, may well have played a part in Switzerland’s early struggle for self-government.