xxxxxThe Sicilian Vespers was the name given to the massacre of the French inhabitants of Palermo, Sicily on Easter Monday, 1282, so called because the killings began by a pre-arranged signal - the sounding of the first stroke of the vesper bell at the evening service. The massacre then spread to other towns, until the island's French population was virtually wiped out. The uprising of the Sicilians against the oppression of their French masters proved successful. The French king of Sicily, Charles I, failed to re-conquer the island. Pedro III of Aragon, who had come to the aid of the Sicilians, was elected king, and the island gained its independence in 1296. 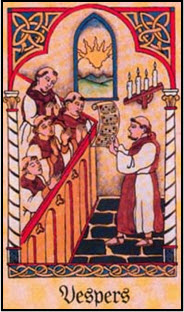 xxxxxThe Sicilian Vespers was the name given to a massacre of the French in Sicily, so called because - by a pre-arranged signal - the killing began in Palermo at the first stroke of the vesper bell on Easter Monday of 1282 (Vespers being the seventh Roman Catholic service of the day). The massacre then spread to other towns until the French population on the island was virtually wiped out.

xxxxxThe killings were the result of a concerted uprising by the Sicilians against their French masters. The King of Sicily, Charles I, himself a Frenchman, had put the island under the control of French officials and soldiers, and, in addition, had 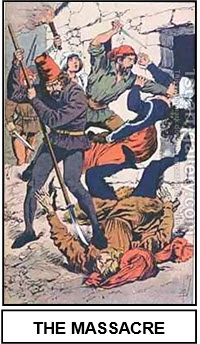 sanctioned the imposition of heavy taxes. The hatred he aroused by such measures resulted in the events which followed the sounding of the vesper bell on March 30th 1282.

xxxxxOn learning of the massacres, Charles I attempted to re-conquer the island, but the Sicilians sought the help of the king of Aragon, Pedro III. He destroyed a fleet sent by the French monarch and was elected as king of Sicily. In 1296 the islan 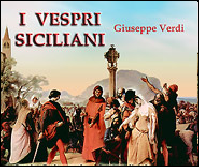 d gained its independence, and for more than a century was ruled by a branch of the Aragonese family.

xxxxxIncidentally, an opera based on the events of the Sicilian Vespers - I vespri sciliani - was produced by the Italian composer Giuseppe Verdi in 1854, and given its first performance in Paris the following year.

Vespers: manuscript illustrating the Anglican Breviary. The Massacre: by the French painter Louis Bombled (1862-1927) – illustration contained in The Sicilian Vespers by the French historian Jules Michelet (1798-1874), 1282.