xxxxxThe Italian physician William of Saliceto was working in Verona when he wrote his treatise Cyrurgia (Surgery) in 1275. Based on his own clinical observation, its detailed information on surgical anatomy had a marked influence on medical practice well into the next century. 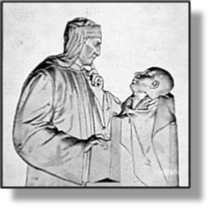 xxxxxThe Italian physician William of Saliceto was born in Saliceto in Lombardy about 1210. It is not known were he received his training - and we must assume that he had some formal instruction - but he first practised in his own province and then, after four years as professor of surgery at the University of Bologna (1270-1274), he was appointed physician for the city of Verona. It was here that he wrote his treatise entitled Cyrurgia (Surgery) in 1275. 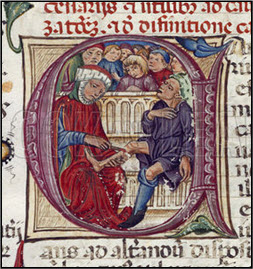 xxxxxThis original work, based on his own clinical observation, had an immediate impact on his profession and a marked influence on medical practice well into the next century. It enhanced his reputation as one of the leading surgeons of his day. His detailed information on surgical anatomy would suggest a wide experience on his part of human dissection. Notable, too, is the distinction he makes between arterial and venous bleeding; his instruction on how to stitch together severed nerves; and his detailed study of the particular kidney complaint that results in the medical symptom of dropsy.