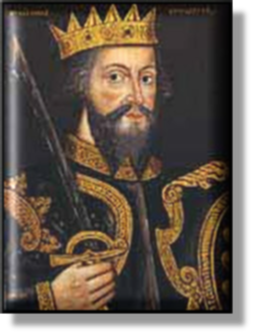 xxxxxWilliam “The Conqueror” came to the throne by conquest, defeating the Anglo-Saxon King, Harold II, at the famous Battle of Hastings. He marched directly to London, leaving a trail of death and destruction in his wake to subdue the natives, and was crowned king in Westminster Abbey on Christmas Day 1066. Hex was a cousin of King Edward the Confessor and claimed that Edward had promised him succession to the English throne in 1051. So when Harold Godwin took the throne as Harold II in January 1066, William decided to invade England and take his kingdom.

xxxxxAfter winning the Battle of Hastings - in which Harold was killed - he set about the conquest of England, a task virtually completed after ruthlessly crushing a revolt in the north in 1069, and overcoming the resistance of Hereward the Wake in 1071. During these five years he swept aside Anglo-Saxon rule and introduced the Norman feudal system, centralising government under the crown and giving out the big estates and high government offices to leading Norman knights and churchmen. By the mid-80s the Anglo Saxon leaders in England had been almost entirely replaced by a new ruling élite which was staunchly loyal to William. And William and his followers firmly established their rule and military occupation by the building of a string of imposing castles throughout the land.

xxxxxIt must be said that Norman rule gave England the stability it badly needed. It also had an important influence on English culture - introducing as it did the new language of Norman French and the distinctive Norman architecture, known as Romanesque. Many French craftsmen and traders came to settle in England.

xxxxxBut for most of us, his reign is remembered for two things; the Domesday Book, a survey of England, ordered by him for the levying of taxes, and the Bayeux Tapestry, a pictorial record of that famous and eventful battle of 1066 and all that.

xxxxxWilliam was the illegitimate son of Duke Robert the Devil, and became Duke of Normandy on the death of his father in 1035 at the age of eight. By the time he was twenty he had proved himself an accomplished soldier, having defended his land against a number of rebellions. As his reign in England showed, he was a firm believer in law and order and a sincerely religious man, upholding the "Truce of God", a ban on fighting imposed by the Church on certain holy days. The Anglo-Saxon Chronicle - a record of the times - describes him as "a very wise and powerful man".

xxxxxWilliam died in Rouen in 1087 following a fall from his horse, and he was buried at Caen. He left Normandy to his eldest son Robert and England to his second son, William Rufus.

xxxxxIncidentally, the coat of arms shown below (two lions passant on a red flag) are those of William the Conqueror at the time of his invasion.

SEE BELOW FOR MAP OF EUROPE AT THIS TIME 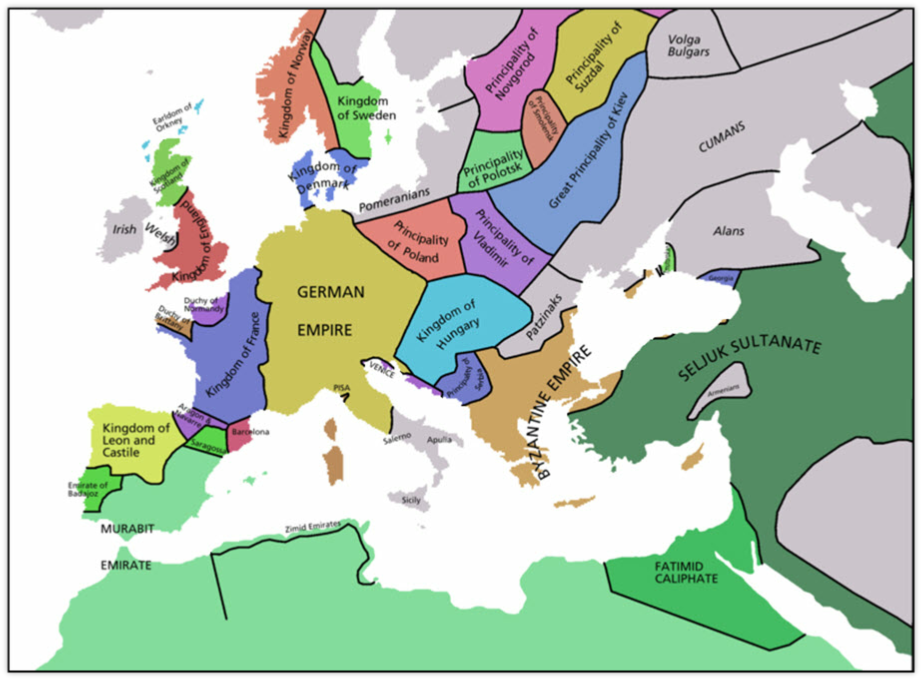 Timewise Traveller is a free non-profit resource. However, if you have found it of interest/value, and would like to show your appreciation, the author would welcome any contribution to Cancer Research UK.