xxxxxRobert Guiscard was a Norman adventurer who, by 1059, was named by the Pope as ruler of Apulia and Calabria in Southern Italy, and of the island of Sicily. Together with his younger brother Roger he captured Palermo in 1072, thereby gaining control of most of the island, and by 1080 had driven the Byzantines out of southern Italy. In 1081 he launched an attack upon the Byzantine Empire, advancing into Greece, but was forced to return to Italy in 1083 to expel the Holy Roman Emperor, Henry IV, from Rome. This he did, but his army then went on the rampage, killing thousands of the inhabitants. He then returned to his war on the Byzantines, but died of a fever on the island of Kefalonia in July 1085. His successful campaigns in Southern Italy and Sicily laid the foundations for the Norman Kingdom of Sicily, established, as we shall see, in 1130 (H1) by his nephew Roger II, the son of his younger brother Roger. 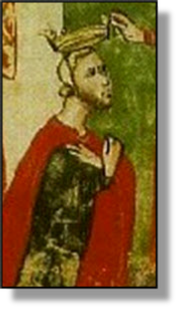 xxxxxRobert Guiscard was an astute Norman adventurer - aptly called "the Fox" - who, together with a handful of horsemen and some 30 foot soldiers, joined his brothers in southern Italy around 1046. After spending some years at the head of a roving band of robbers, he took part in the Battle of Civitate in 1053, a Norman victory over the army of Pope Leo IX, and four years later succeeded his brother Humphrey as count of Apulia. Then with the support of Roger, his youngest brother, he consolidated his hold on Apulia and started the conquest of Calabria. It was at this stage that the Papacy, at odds with the Holy Roman Emperor over the investiture controversy, sought the support of the Normans. By the Council of Melfi in August 1059 Pope Nicholas II officially invested Guiscard as duke not only of Apulia and Calabria, but also of Sicily.

xxxxxAfter an unsuccessful attempt to conquer the island of Sicily in the 1060s, in 1071 Robert captured Bari, the principal Byzantine city, and then returned to Sicily with his younger brother Roger. They captured Palermo in 1072 and this gave them control over much of the island (though it was not until 1091 that Roger, put in charge of the campaign, had expelled the last of the Muslims.) Returning to the mainland to complete his conquest of Southern Italy, Robert captured Salerno in 1076, making it the capital of his duchy, and by 1080 all but the city of Naples and the small Norman principality of Capua was under his control.

xxxxxNow at the peak of his power, he decided, at the age of 64, to set out on the conquest of the Byzantine Empire. Earlier, in 1073, a marriage had been arranged between his daughter Helena and the son of the emperor Michael VII, and although Michael was overthrown five years later, Robert considered that this gave him a right to the throne. Inx1081 he invaded Illyria with an army of some 30,000 men, and, having defeated the emperor, Alexius I Comnenus, at the Battle of Dyrrhachium (Durazzo on the map), he advanced into Greece. At Kastoria, however, having learnt that the Holy Roman Emperor Henry IV was at the gates of Rome and threatening his ally, Pope Gregory VII, he left his son Bohemond in charge of the army and returned to Italy in 1083. He quickly drove Henry IV out of Rome, together with his anti-pope Clement III, but this done, his Norman army then went on the rampage. Parts of the city were burnt or destroyed and it was said that thousands of Rome's citizens were killed, their bodies left lying to rot in the streets. Little wonder that Gregory was forced to flee the city. As for Robert, he returned to his campaign against the Byzantines - his son having been defeated following the siege of Kastoria in October 1083 - but, died of fever, along with 500 of his men, on the island of Kefalonia in July 1085.

xxxxxDuring his successful campaigns in southern Italy, Robert appointed his younger brother, Roger Guiscard, as Count of Sicily, thus laying the foundations for the Norman Kingdom of Sicily, established, as we shall see, in 1130 (H1) by Roger’s son, Roger II. 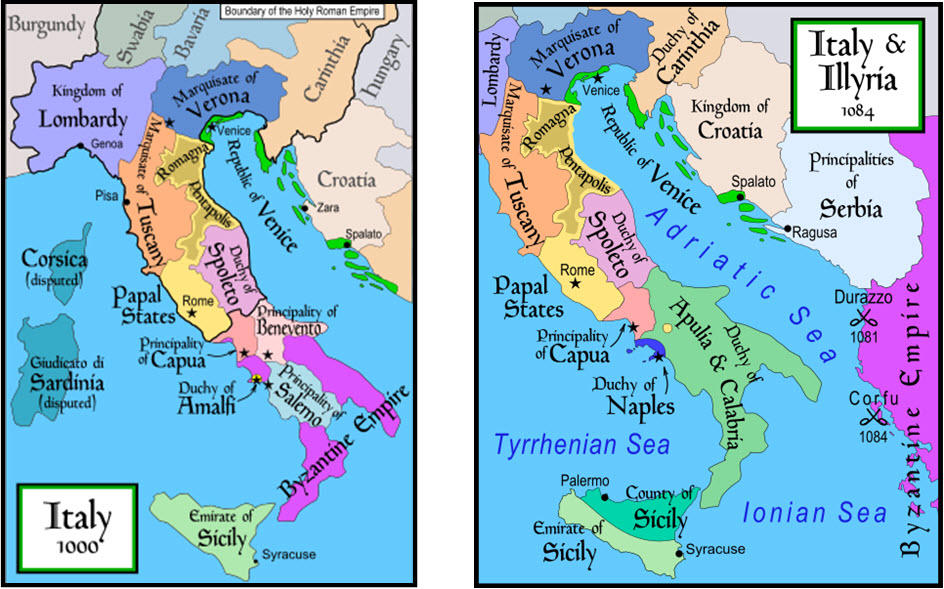