xxxxxThe Seljuk Turks, a nomadic people who, by 1055, had founded a large empire centred on Baghdad, gained a major victory over the Byzantines at the Battle of Manzikert in 1071. This paved the way for their conquest of Anatolia (modern Turkey) and, within the year, the capture of Jerusalem - an occupation which, as we shall see, was to lead to the sending of the First Crusade in 1095 (W2). The empire went into decline over the next hundred years and was finally reduced to a holding in Anatolia, but from its remnants was to emerge Osman I, founder of the great Ottoman Empire in 1300 (E1). 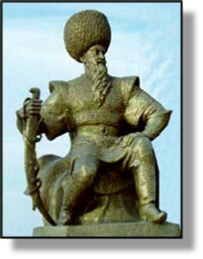 xxxxxThe Seljuk Turks, a nomadic group of fighters originating in central Asia, established themselves in the Middle East some time in the 9th century and by 1055 had founded an Islamic empire, centred on Baghdad, stretching over vast tracts of Iran, Iraq and Syria. Their defeat and capture of the Byzantine emperor Romanus IV Diogenes at the Battle of Manzikert in the year 1071 paved the way for the conquest of Anatolia (modern Turkey). Indeed, within the same year the Turks had moved south into the Christian Holy Land and taken control of Jerusalem, a city which had been in Arab hands since the seventh century.

The Battle of Manzikert, north of Lake Van, was the culmination of years of hostility between the peoples of Asia Minor - mainly Armenian and Greek-speaking - and these tough Turkish nomads who had slowly but relentlessly migrated from the east. 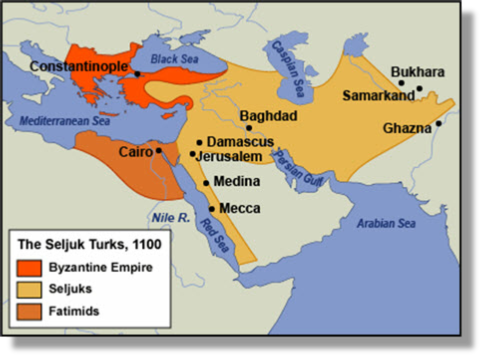 xxxxxThe height of the empire's power was reached during the reign of two Sultans, Alp-Arslan (1063-72) (illustrated above) the victor at Manzikert and the true builder of the Great Seljuk Empire, and Malik Shah (1072-92) who, as we shall see, was responsible for the start of the Crusades in 1095 (W2). In 1085 he captured Antioch - alarming the Byzantines - and then began blocking the routes whereby the Christian pilgrims made their way to Jerusalem. The Pope heard their cries for help and took action.

After Malik Shah's death the Seljuk Empire went into slow decline and had lost its power by 1200. However, one branch of the dynasty managed to survive in Anatolia until the 13th century. It was here towards the end of that century that the ruler of a small principality in the north-west of the country declared his independence from the Seljuk Sultanate of Iconium. He assumed the title of Osman I and in 1300 (E1) founded what was to become the great Ottoman Turkish Empire.