xxxxxPope Gregory VII, elected in 1073, was an outstanding reformer, anxious to put an end to widespread corruption within his Church. His decrees - like those issued against simony - were rigorously enforced, but his uncompromising stand on the investiture controversy involved him in bitter conflict as from 1075. Above all, his claim that he had the right to depose kings did not go down too well with European monarchs. One in particular, Henry IV, the Holy Roman Emperor, went so far as to depose the Pope! He later repented, but in 1080, when he was excommunicated again, he was far from repentant. He besieged Rome and elected a pope of his own choice. Gregory made his escape, and died in Palermo, Sicily, five years later. And, as we shall see, the dispute over the right of investiture dragged on, continued in the very next reign in the shape of a bitter quarrel between William II and Anselm, appointed his archbishop in 1093 (W2). 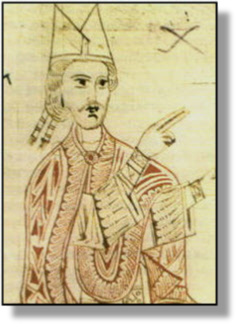 xxxxxA Tuscan named Hildebrand, Gregory VII became a monk at an early age and served some time at the monastery at Cluny, a centre dedicated to the reform of church abuses. He soon came to the notice of the papacy for his reforming views. Pope Leo IX brought him to Rome in 1049 where he worked as an advisor to succeeding popes until he was himself elected to the papacy in 1073.

xxxxxDuring his years in office, 1073-85, he was an outstanding reformer, tackling head-on, for example, the widespread corruption within the church. He issued decrees against simony - the buying and selling of church offices - and against the marriage of those in holy orders. Then in 1075 he turned his attention to the pressing problem of lay investiture and began the long and bitter struggle with which his name is generally associated. He claimed that the Pope had the power to depose kings, and he roundly condemned lay rulers who made clerical appointments and granted to those appointed the symbols of their authority - a criticism levelled in particular at the Holy Roman Emperor at that time, Henry IV. 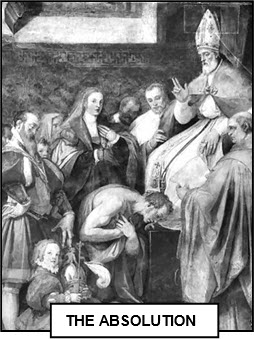 xxxxxHenry, beset by problems at home and needing to show his independence, defied the Pope and in 1076, with the support of the German bishops, went so far as to depose him. It proved a step too far. He was excommunicated by the Pope (i.e. thrown out of the Church) and, losing his popular support, was obliged to eat humble pie. Matilda, the Countess of Tuscany, agreed to mediate between the two parties and he travelled to her castle at Canossa in the Alps where Gregory was staying. The story goes that for three days he stood barefoot in the snow at the gate of the castle, and then knelt before the pope (illustrated). Gregory readmitted him to the Church, but Germany now became plunged into civil war and when Henry emerged victorious in 1080 he was again excommunicated. This time he was far from penitent. In response, he elected an "antipope", Clement III, invaded Italy, entered Rome, and had Clement crown him as emperor in St. Peter's Church in March 1084. Gregory, having taken refuge in the castle of St. Angelo, sought the help of the Norman leader Robert Guiscard but was forced into exile when the Norman army, having expelled Henry and his substitute Pope, ran amok in Rome. He took refuge among the Norman lords of southern Italy and died at Palermo in May 1085.

xxxxxBut the death of Gregory VII did not bring an end to the investiture controversy, far from it. In England, as we shall see (1093 W2), it was at the centre of a heated dispute between William II and his archbishop, Anselm, an altercation which continued into the next reign, that of Henry I. In fact, it was not until 1122, at the Council of Worms that a compromise of sorts was reached between Church and State on this particular issue, and even then it centred around the relations between the pope and the German Kings. In England, where a similar compromise had been reached in 1106, the agreement only provided a breathing space.

xxxxxIncidentally, the Holy Roman Empire over which the German king Henry IV claimed to rule, was seen as a Christian revival of the Roman Empire. In 800 AD Pope Leo III gave Charlemagne, the King of the Franks, the title “Emperor of the Romans” in the hope of making a Christian Empire within Europe like that of ancient Rome. The title was assumed by German kings as early as 962 and adopted by the powerful Habsburg dynasty when the first Habsburg, Rudolf I, became king of Germany in 1273. As we shall see, under this family the Holy Roman Empire reached the height of its power in the reign of Charles V (1519-1556). He created an Austrian and a Spanish line. The Spanish line came to an end in 1700, however, and the last of the Austrian line, Emperor Francis II, gave up the title in 1806.