xxxxxFollowing the Norman invasion, sporadic fighting broke out across the country, followed, as we shall see, by serious rebellions in the north-east and East Anglia. To counter this threat William embarked on a programme of castle building. Within the next twenty-five years some eighty castles were constructed throughout the land. Powerfully built with square or round towers, they dominated the English countryside and, by their sheer size, deterred all but the most powerful and determined aggressor. The fortress at Windsor was one of the first to be built, begun in 1069. 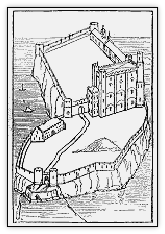 xxxxxFollowing the Battle of Hastings and William’s enthronement as king, sporadic fighting broke out across the country, followed, as we shall see, by serious rebellions in the north-east and in the fens of East Anglia. To keep control of his new kingdom, William embarked upon a crash programme of castle building. Over the next twenty-five years, every English town of any size had a castle dominating its skyline. In all, some eighty castles were constructed throughout the land. From these impressive defensive positions a relatively small body of men could control the local population. Just the sheer size of them was enough to deter all but the most powerful and determined aggressor. 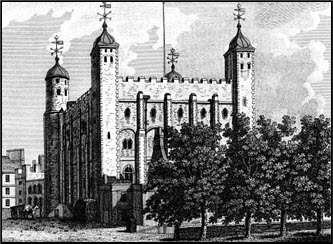 xxxxxGone now was the wooden stockade, perched on a mound and surrounded by a crude ditch. The Normans introduced the stone keep, square to begin with - like the White Tower of the Tower of London -, but then rounded to provide better protection. So thick were the walls of these battlements that methods to undermine them or scale them were expensive in both time and casualties. And if the castle was built on the top of a steep hill - like the one built at Corfe in Dorset - or provided with a deep moat, like many were, then the chances of a successful attack were even less likely.

xxxxxA few examples are illustrated. Work on the Tower of London, as we shall see, was begun about 1075 to defend the Pool of London, and Windsor Castle was founded by William I on the site of an earlier fortress, work starting in 1069.