xxxxxIt was during his long stay at the monastery of Bec in Normandy (1042 to 1066) that the Italian-born Lanfranc gained a reputation as a theologian and church reformer. He became Abbot of Caen in 1066, but four years later, in 1070, he was persuaded by William I to become Archbishop of Canterbury. He served the king well, even taking his side against the pope in the emerging struggle between the rights of the church over the state. Under his guidance the Church in England was given a firmer direction. He built a number of new churches and the rebuilding of Canterbury Cathedral was begun during his period of office. As a scholar, his major work was Book on the Body and Blood of the Lord, a treatise concerning the church's eucharistic doctrine. He was succeeded by Anselm in 1093 (W2), and, as we shall see, his relationship with his king was far from harmonious.

xxxxxWilliam I came to the English throne with the support of the Pope. In 1070 he deposed the Anglo-Saxon Archbishop of Canterbury and replaced him with the Abbot of Caen, the Italian-born Lanfranc.

xxxxxLanfranc was born in Pavia, and, having studied law and philosophy, he went to Tours to study theology and then taught this subject at his own school in Avranches. He entered the monastery of Bec, Normandy, in 1042. Here he quickly gained a reputation as a theologian and church reformer, and the school he established at the monastery was soon attracting scholars from all over Europe. He became the Head of Caen Abbey in 1066 and, four years later, William - acutely aware of his outstanding talent - persuaded him to become Archbishop of Canterbury and his advisor on Church matters. 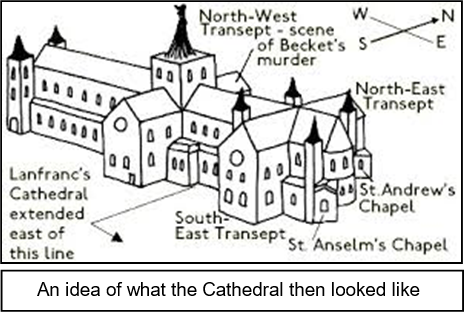 xxxxxUnder his leadership the English church was given a much firmer direction. English clergy were replaced by Normans, special ecclesiastical courts were set up, and the clergy were forbidden to marry. During his period of office many new churches were built and work was begun on the rebuilding of Canterbury Cathedral (illustrated). And in the struggle that was beginning between the rights and powers of the Pope in the affairs of State, he gave strong support to William in his refusal to allow the Pope, the formidable Gregory VII, to exercise any real authority over the English church.

xxxxxIn scholarship, he is chiefly remembered for his Book on the Body and Blood of the Lord, a learned treatise on the subject of the church's eucharistic doctrine.

xxxxxHe died two years after the death of the King he had served so well, and was succeeded in 1093 (W2) by one of his outstanding pupils, Anselm. He was to serve both William II and Henry I but, as we shall see, unlike Lanfranc, his relationship with his monarchs was far from harmonious.