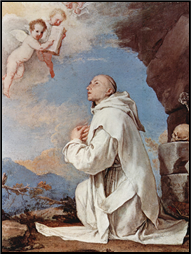 xxxxxThe Carthusian Order, a Roman Catholic order of monks, and later nuns, was founded by St. Bruno (c1030-1101) in 1084. He was born in Cologne and was a priest in charge of the cathedral school at Rheims for close on 20 years (1057-76). Following a dispute over Church matters, he took himself off to the mountains near Grenoble, south-east France, and founded the first monastery of the order at Chartreuse nearby. He was canonised in 1514. 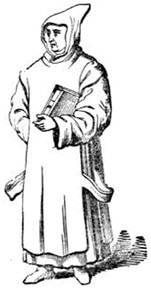 xxxxxThe Order is an austere one. The monks and nuns live contemplative, solitary lives and they support themselves by their own labours. The Order was slow to grow but by the early sixteenth century, at the peak of its development, it numbered nearly 200 houses. The house at Chartreuse is famous for the making of a well-known liqueur.

xxxxxThe order was introduced into England in about 1178 when the first Charterhouse (the medieval English name for a Carthusian monastery) was founded at Witham in Essex. One remains at Parkminster in Sussex, established in 1833. The public school known as Charterhouse at Godalming, Surrey, is so called because it was originally founded in London in 1611 on the site of a former Carthusian priory, there from 1371-1535.

xxxxxThe Carthusian Order, made up of Roman Catholic monks, and later nuns, was founded by St. Bruno in 1084 at Chartreuse near Grenoble in south-east France. The order is a severe one, members living solitary lives and supporting themselves by their own labours. It was introduced into England around 1178, when the first "Charterhouse" was founded.