xxxxxIn 1555 the French physician and astrologer Nostradamus compiled a book of prophecies entitled Centuries. Claiming to predict major events and people until the end of the world in 3797, its veiled writing and obscure terms made it open to wide interpretation. Amongst events thought to have been predicted were the execution of Charles I, the Great Fire of London - to which he gave the correct date ­- , the French Revolution and the two world wars. A number of French royalty asked for horoscopes or sought his advice. 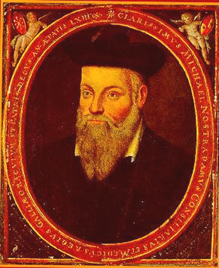 xxxxxMichel de Nostredame - now known by the Latinized version of Nostradamus - was a French physician and astrologer who began making predictions in the late 1540s. In 1555 and 1558 he compiled two books of prophecies entitled Centuries which, he claimed, contained predictions about major events and people up to the end of the world, foreseen as 3797. Written in quatrains - four lines of verse - these prophecies, some 900 in number, are couched in veiled and obscure terms, making them open to wide interpretation. In addition, any attempt at deciphering is not helped by the fact that the verses include occasional words in Latin, Hebrew and Spanish; there are very few dates; and the predictions themselves are not necessarily in chronological order!

xxxxxDespite their obscurity, over the years since 1555 many people have attempted to interpret these prophecies, linking his vague statements to important events of their day. Thus some have claimed that the verses predicted the Great Fire of London, events during the French Revolution, the rise of Napoleon, and the outbreak of the two World Wars. However, some of his predictions were not so vague. In one passage he predicted the execution of Charles I - The Parliament of London will put their king to death. He will die because of the shaven heads in council - and he also gave the precise date (1666) of the Great Fire of London. 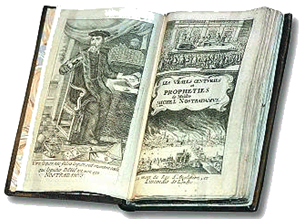 xxxxxHe was born in Saint-Rémy in southern France, and studied medicine in Montpellier. He began practising about 1529, and moved to Salon, north-west of Marseilles, in 1544. Here, because of his success in curing extremely sick patients - many of them suffering from the plague - he came to be regarded as a miracle healer. He made his first prediction in 1547, and in 1555, with the publication of his Centuries (so-named because the book is divided into sections of 100 verses), his fame spread abroad, and French royalty sought his advice. Catherine de Medici, for example, wife of Henry II, asked him to plot the horoscopes of her husband and children, and later Charles IX gave him credence by appointing him his court physician. The second, enlarged edition of the book, published in 1558, was dedicated to Charles IX before he came to the throne. In 1781 the Centuries was banned by the Roman Catholic Church. Today his house in Salon has been preserved, and his tomb is in the Church of Saint-Laurent.