xxxxxAs we have seen, it was Martin Luther who instigated the Reformation in Germany in 1517 (H8). In 1530 the Augsburg Confessions defined the new Protestant belief, but in 1546 Emperor Charles V turned against the Protestants in his midst and defeated them as the Battle of Mühlberg. The conflict which then followed was concluded by the Peace of Augsburg in 1555. Here a compromise was reached whereby each individual prince within the Empire was able to impose his own choice of religion upon his subjects. If nothing else, this officially recognised the existence of the Lutheran church. However, the tension continued and, as we shall see, erupted in the Thirty Years War which broke out in 1618 (J1). 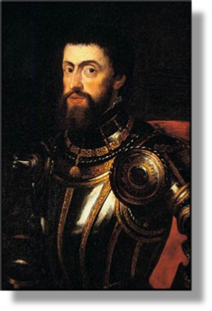 xxxxxIn Germany, as we have seen, it was the religious reformer Martin Luther who in 1517 (H8) instigated the Reformation, though this had not been his original intention. Well before his death some 300 North German princes had adopted the new form of faith. Thus In 1529 when the Diet of Speyer attempted to put the clock back, there were loud protests, and the reform movement received its name: Protestantism. The following year the Augsburg Confession defined the new Protestant belief, and the concept of a single Christian authority in Western Europe seemed clearly at an end. In the case of Germany, however, the Emperor Charles V (illustrated) had other ideas. In 1546, having at last gained a period of peace, he turned his attention to the Protestants in his midst, and beat them at the Battle of Mühlberg.

xxxxxThen, on the strength of this victory, he imposed what he saw as a temporary religious settlement until the matter could be resolved by a general council of the Roman Catholic Church. At the Diet of Augsburg in June 1548, he gave the force of law to the 26 articles of this temporary settlement, known as the Augsburg Interim. But the Emperor underestimated the strength of the Protestant movement, and the extent of its growth over the past decade. A number of Protestant Electors objected to these terms on the grounds that they were too Catholic in content. At the Diet of Leipzig held in December of the same year, they issued their own Interim settlement based on the doctrine of their reformed church. Neither "Interim" being accepted, war was resumed, but this time the Protestants had the support of Maurice of Saxony - who had earlier supported Charles - together with the French king, Henry II. The "Princes' War", as it was called, proved inconclusive, but it had the effect of bringing both sides to the peace table in 1555. 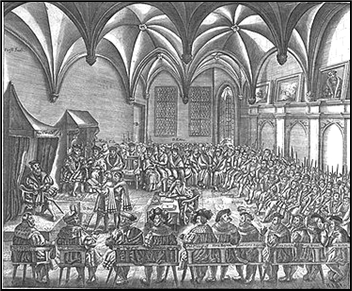 xxxxxThe Peace of Augsburg, signed at the imperial Diet of Augsburg and presided over by Ferdinand, the Emperor's brother, at last brought a period of respite. Both Catholics and Protestants were anxious for a settlement, and were prepared to compromise in order to achieve it. Basically, the settlement established the right of each individual prince within the Holy Roman Empire to impose his own choice of religion upon his subjects. What it also did as a consequence, however, was to recognise formally and legally the right of existence of the Lutheran Church within Germany, and, politically, to increase quite substantially the authority of the princes, thus weakening the unity of the Empire. It can be said that for the next fifty years the Peace of Augsburg saved the Empire from serious internal conflict, but acute religious and political tensions remained. As we shall see, these were eventually to surface and erupt into the Thirty Years War, a conflict which, beginning in 1618 (J1), was to spread over most of Europe and put an end to the concept of a Holy Roman Empire.