xxxxxAs we have seen, in 1525 (H8) emperor Charles V won the Battle of Pavia against the French, thus gaining control of much of Italy, but throughout his life he struggled to keep his vast lands intact. His most serious enemy were the Ottoman Turks under their able leader Suleyman. They supported the Barbary Pirates along the coast of North Africa, and in 1529 came close to taking Vienna. At home he faced the revolt of the Protestants, and in 1555 was obliged to make a compromise settlement with them at the Peace of Augsburg. The following year, 1556, he abdicated and his son, Philip II, already ruler of the Netherlands and the kingdoms of Naples and Sicily, became king of Spain and its overseas territories. Husband of Queen Mary I of England, he gained victories over the French, and seized both the Philippines and Portugal, but, as we shall see, in 1581 (L1) he faced a long-term revolt in the Spanish Netherlands and, seven years later, made a disastrous attempt to invade England and restore the Roman Catholic faith.

BETWEEN KING PHILIP II OF SPAIN AND EMPEROR FERDINAND I

xxxxxAs we have seen, Charles V, having inherited over a number of years the vast lands of the Habsburgs, struggled to keep them safe from invaders from without and divisions from within. He inherited the Holy Roman Empire from Maximilian I in 1519, and by this time his territories, quite apart from those in central Europe - Germany and Austria - included the kingdoms of Aragon and Castile in Spain, Sardinia, the Netherlands, and the Italian states of Sicily and Naples, not to mention the Spanish conquests - by no means finished - in Africa and the New World! 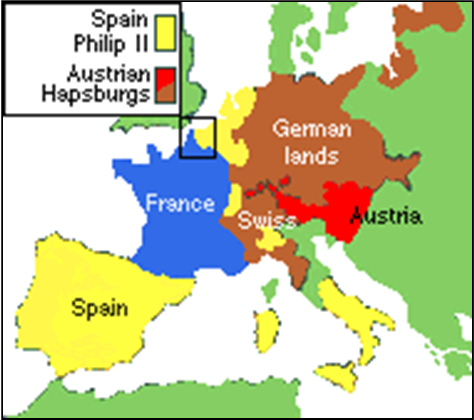 xxxxxHe spent the best part of his reign - some 27 years - in savage conflict with Francis I. The French king was intent on seizing territory in Italy and, when necessary, was prepared to ally himself with both the Muslim Turks and Protestant princes in Germany to achieve his aim. Even Charles’ resounding victory at the Battle of Pavia in 1525 (H8) did not completely put an end to French ambitions in Italy.

xxxxxMeanwhile, Charles was also faced with a serious threat from the Ottoman Turks under their able leader Suleyman I. They came close to taking Vienna in 1529, and their support of the Barbary pirates along the North African coast required a long campaign to restore vital trade routes in the Mediterranean. 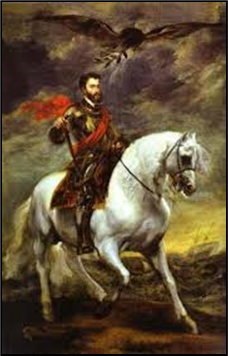 xxxxxAt home, faced with the divisions brought about by the Reformation, Charles fared no better. He won the battle of Mühlberg in 1546, but by then the Protestant movement was too firmly established to turn back the clock, and the Princes' War that followed ended in stalemate. At the Peace of Augsburg in 1555, he was obliged to reach a compromise. It was a compromise which brought a measure of peace for some 50 years but, as we shall see, it proved the first step towards the eventual collapse of the Empire in central Europe.

xxxxxIt is hardly surprising then, that in 1556 the Emperor, worn out by his efforts and saddened by his failure to restore the Catholic faith in Germany, decided to abdicate. He divided his vast empire between his brother and son and retired to the monastery of San Jeronimo de Yuste in Estremuda in Spain. He died there two years later. (The portrait is by Van Dyck).

xxxxxHis son Philip, having recently acquired from his father the Netherlands and the kingdoms of Naples and Sicily, now became king of Spain as Philip II - and this included all of Spain's overseas territories. Husband of Mary I of England until her death in 1558, he was to rule the Spanish Empire at the very height and extent of its power. Meantime, in the next two years, while England, dragged into a war with France, was losing the fight and the port of Calais, he won two resounding victories over the French and secured a favourable peace settlement. There followed a naval victory over the Turks and the seizure of the Philippines and Portugal, but, it was as the champion of the Roman Catholic Church and the leading light of the Counter Reformation, that Philip wished to make his mark in European affairs. In that regard, he was to meet with no more success than his father. As we shall see, in 1581 (L1) he was faced with a serious rebellion in the Spanish Netherlands, and seven years later failed miserably in his attempt to restore the Roman Catholic faith in England.

xxxxxFerdinand I (1503-64), king of Germany, Austria, Bohemia and part of Hungary, was the younger brother of Emperor Charles V. A sound, able ruler, he held his lands together against the advance of the Ottoman Turks, but his relationship with his brother was often strained. In 1555, however, he successfully negotiated the Peace of Augsburg, a compromise agreement between Roman Catholics and Protestants in Germany. As a reward, Charles appointed him his successor in 1556. He assumed the title of emperor in 1558, and reigned until his death in 1564. As time was to prove, the Peace of Augsburg gave Germany over 50 years of comparative peace until war broke out again between the religious factions in 1618 (J1). 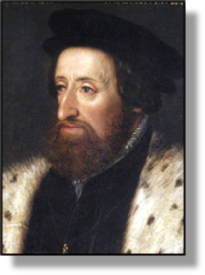 xxxxxFerdinand I (1503-64) did not always enjoy good relations with his brother and, indeed, at one time, Charles had appointed his son, Philip, to succeed him as emperor. However, in reward for his successful handling of the Treaty of Passau in 1552, and of the Peace of Augsburg three years later - both concerned with the Catholic-Protestant divide - Ferdinand (illustrated) assumed the duties of the Emperor upon the abdication, and was granted the title when Charles formally resigned in 1558. Administratively responsible for Germany and Austria, Ferdinand attempted to hammer out a reunion between Roman Catholics and Protestants, but his first attempt failed and, with his death in 1564, he ran out of time. Nonetheless, the Peace of Augsburg did give Germany 50 years of comparative peace. As we shall see, it was not until 1618 (J1) that religious conflict broke out again with a vengeance in the so-called Thirty Years' War.

xxxxxFerdinand became governor of the duchy of Wurttemberg in 1521, and following the death of his brother-in-law, King Louis II of Hungary, five years later, claimed the thrones of both Hungary and Bohemia. He was crowned king of Bohemia in 1527, but in Hungary he was rejected by the nobility, who had the support of the resident Ottoman Turks. During Suleyman’s siege of Vienna in 1529 Ferdinand sought safety in Bohemia, but following the failure of the Ottomans to take the city, he did launch a counter-attack. However, it was only after a long period of intermittent and indecisive encounters - known as “The Little War” - that in 1562 he gained sovereignty over a small region of Hungary, and even this appointment was dependent on his paying tribute to the Turks. In the meantime, in 1531 his Emperor brother had elected him king of Germany - the country which had seen the birth of the Reformation and the conflict this brought in its wake.