xxxxxAfter a long period of unrest, a new power base developed in eastern Afghanistan in the early part of the 11th century. Here the adventurer Sultan Mahmud established an independent Islamic kingdom centred on the city of Ghazni. By 1025 he had annexed the whole of the Punjab in northern India. It was left to Muhammad of Ghur, however, to spread the Islamic faith. He became ruler in 1173 and, after capturing Delhi in 1193, established the Delhi Sultanate, the major Muslim state in India. By the 1350s the Islamic faith had spread far into the south, but a new people, the Mongols, were slowly moving into the sub-continent. As we shall see (1383 R2), by the end of the 14th century the Sultan's territories had been overrun by the Mongol leader Tamerlane. 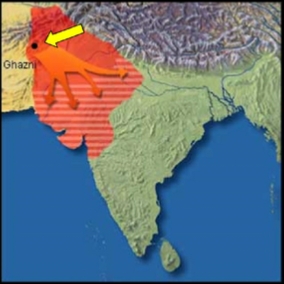 xxxxxIn the early part of the eleventh century, following a long period of internal unrest in India, a new power developed in eastern Afghanistan. Here, Sultan Mahmud, the son of a Turkish slave, established an independent Islamic kingdom centred around the city of Ghazni (arrowed). During his long reign (999 to 1030) he launched a series of expeditions into northern India, plundering the wealthy cities and using the booty to make his capital one of the greatest centres of Islamic culture in Asia. By 1025 he had annexed the whole of the Punjab and there was a growing exchange of trade and ideas between the Indian and Muslim worlds.

xxxxxBut whilst Mahmud was the first to carry the banner of Islam into India, he was an adventurer not a missionary. He never tried to convert his subjects to the Islamic faith or impose it upon them. This was left to Muhammad of Ghur (illustrated above), who began his reign in 1173 and, as the most successful ruler after Mahmud, may be regarded as the true founder of Muslim power in India. 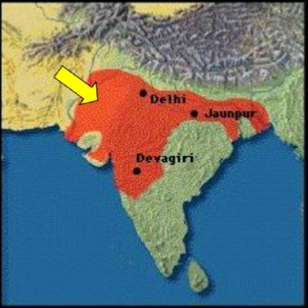 xxxxxHis invasion of India (see map) dates from 1175 and within thirty years most of northern India was under his military control. Delhi having been captured in 1193, Muhammad left his lieutenant and former slave Qutb-ud-Din Aybak in charge of his Indian possessions. It was he who, in 1206, established the Delhi Sultanate, then the major Muslim state in India. This Slave Dynasty, as it was called, made no further advances, but under the Khalji dynasty that followed (1290-1320) much of the Deccan (in the south) became part of the Muslim dominions in India. By now, however, a new power was slowly moving into the sub-continent, the Mongols. Under their relentless pressure, the Islamic empire in India began to crumble. As we shall see (1383 R2), the end came in 1398. The Sultan' territories were overrun and the inhabitants of Delhi massacred by the armies of the Mongol leader, the all-conquering Tamerlane.