xxxxxThe Italian painter and architect Giorgio Vasari is best remembered today as an art historian. His The Lives of the Most Excellent Painters, Sculptors and Architects, published in 1550, apart from containing biographical details of artists from the Middle Ages to the Renaissance, provides a critical assessment of their work. He was much influenced by the paintings of his contemporaries, Michelangelo and Raphael, but he excelled as an architect. He was responsible for the Uffizi Palace, and designed Michelangelo's magnificent tomb in the church of Santa Croce, Florence.

Vasari: self-portrait – Uffizi Gallery, Florence (in the Vasari Corridor, designed by him in 1564, and now housing the museum’s famous collection of self-portraits.) 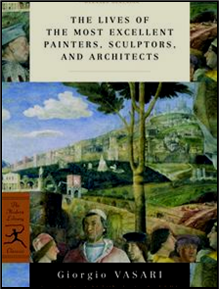 xxxxxToday, Vasari is best remembered as an art historian. His The Lives of the Most Excellent Painters, Sculptors and Architects, published in 1550, is one of the earliest authoritative works on the subject of the visual arts. It provides a wealth of valuable information about the development of Italian art from the Middle Ages to the Renaissance. Although the book is not without errors, it is easy to read and, apart from biographical information, contains a critical assessment of each artist's work, and comments on the progress of art in general. As a critic he “endeavoured to distinguish between the good, the better and the best”, and to judge a work of art according to the standards of its own time. The revised edition of 1568 included his autobiography. 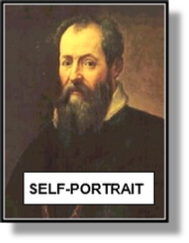 xxxxxThe Italian art historian, painter and architect, Giorgio Vasari, was born in Arezzo. He studied art in Florence in the studio of Andrea del Sarto, and it was here that he came to admire the works of his contemporary Michelangelo. He worked for the Medici family while in Florence, and then visited Rome, where he was much impressed by the work of Raphael. His painting, though never considered of outstanding merit, clearly showed the influence of Michelangelo, particularly in his mannerist style, and can be seen in the frescoes he produced for the Palazzo Vecchio in Florence and the Vatican in Rome.

xxxxxIt was as an architect that he showed his greatest artistic talent, but, like all architects of the day, he worked in the shadow of Michelangelo. He designed a number of churches and palaces in Pisa and in his home town, but his most eminent works are to be seen in Florence: the Uffizi Palace (now a famous art gallery), and his design for Michelangelo’s imposing tomb in the church of Santa Croce (both illustrated below). The three figures seated on the monument represent the skills in which Michelangelo excelled - sculpture, painting and architecture.