xxxxxThe Italian anatomist Gabriel Fallopius became professor of surgery and anatomy at Padua University in 1548. It was here, by means of post-mortem dissection, that he became a leading authority on the make-up of the human body. He made a special study of the female reproductive organs and discovered a number of parts, including the oviducts, known today as the Fallopian tubes. His notes, Observationes anatomicae, also include a study of the inner-ear. A friend and great admirer of his work was the Belgian anatomist Andreas Vesalius. As we shall see, among those who benefited from his research were the Italian embryologist Hieronymus Fabricius and the English anatomist William Harvey (1628 C1). 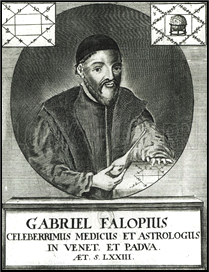 xxxxxThe Italian anatomist Gabriel Fallopius was born in Modena and, after studying at Ferrara University, taught anatomy at the University of Pisa. In 1548 he was appointed professor of surgery and anatomy at Padua University and it was here that he became one of the leading authorities of his day on the make-up of the human body. By means of painstaking post-mortem dissection, he made a special study of the female reproductive organs and discovered and named a number of parts, including the oviducts - known to this day as the Fallopian tubes.

xxxxxHe is also remembered for his research into the structure of the inner ear, during which he described the cochlea, a small organ assisting hearing, and the canals which are responsible for maintaining the balance of the body. His 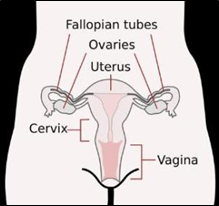 medical notes, outlined in his Observationes anatomicae of 1561, confirmed his standing as one of the founders of the science of anatomy.

xxxxxFallopius was a friend of the Belgian anatomist Andreas Vesalius, and gave him full support in his criticism of earlier theories on anatomy, notably those of the ancient Greek physician Galen. In his turn, Vesalius, who was on the staff of Padua University himself until 1543, greatly admired and respected Fallopius for the advances he made in the knowledge of the human body

xxxxxAs we shall see, a man who studied under Fallopius and succeeded him as professor of surgery and anatomy at Padua, was the Italian Hieronymus Fabricius. He proved one of the founders of modern embryology, and his study on the valves of the veins considerably assisted his pupil, the English anatomist William Harvey, when he developed his theories on the circulation of the blood (1628 C1).

xxxxxIncidentally, in 1564 Fallopius made the earliest published reference to the condom, the name probably deriving from the Latin word condus meaning "receptacle".