xxxxxAs we have seen (1400 H4), it was probably around 800 AD that the Karanga settled between the Zambezi and Limpopo rivers in south-east Africa. They built stone-structured enclosures and these were continued by the Shona people, who called the area Zimbabwe (House of Stone). The empire reached the height of its prosperity in the early fifteenth century under the Mwene Mutapa kings, but by 1450 it began to decline, unable to support its growing population. The large stone enclosures were eventually abandoned, and the tribe split up into two settlements north and south of Zimbabwe. The Portuguese arrived in the 17th century, and by that time the powerful Rozwi people were moving into the area.

have seen (1400 H4), it was probably the Karanga who, around about 800 AD, settled in the region between the Zambezi and Limpopo rivers in south-east Africa and began to build an elaborate complex of stone-structured enclosures. The Shona people who replaced them gave the settlement its name, Zimbabwe, meaning House of Stone.

aaaaaThe first development appears to have been a number of stone-walled enclosures on a low-lying hill known as the Acropolis. Then some 50 years later these enclosures were extended into the valley below and, over the years, developed into the building of an immense structure known as the Great Enclosure. This included a huge wall of granite blocks - over 30 feet high in places - enclosing stone-built compounds, the whole linked by a network of narrow, winding alleyways. These stone apartments and dwellings were for the administrators and wealthy merchants. The large labouring class lived outside the complex in hovels made of mud.

aaaaaAlthough based originally on agriculture and the keeping of cattle, a flourishing industry and trade soon developed in copper and gold, mined locally. These minerals, together with ivory, apart from supplying local industries, proved valuable barter, and a prosperous empire developed, the wealthy enjoying luxuries coming from the Middle East and as far afield as south east Asia and China.

aaaaaThe empire reached the height of its prosperity at the beginning 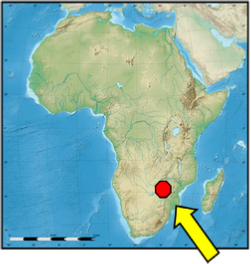 of the fifteenth century under a line of kings known as the Mwene Mutapa, but by about 1450 it went into rapid decline. It had expanded at a pace over the past two hundred years, based on overseas trade and tribute from a large number of far-flung settlements, but its increasing population became too large for the surrounding area to support. In the latter part of the century the empire's huge stone complex was abandoned and two new states developed, one in the south-west called Torwa, with its centre at Khami, and the other in the north near Mount Fura and known as Mutapa. Both states carried on the coastal trade in gold and ivory, and both built a complex of stone buildings, but these structures were not on the same scale as those of Great Zimbabwe, and both states based their economy firmly on cereal growing and the keeping of cattle.

aaaaaIn the seventeenth century this whole region was to undergo change with the arrival of the Portuguese and the rise of the powerful Rozwi kingdom in present-day Zimbabwe. It was not until 1867 that the ruins of Great Zimbabwe were discovered.