xxxxxIn his early years the Englishman Christopher Wren studied science. He was a founder member of the Royal Society, and in 1661 was appointed professor of astronomy at Oxford University. It was at this stage that he began showing an interest in architecture and, visiting Paris, was influenced by the baroque style of the Italian architect Giovanni Lorenzo Bernini. It was, in fact, the Great Fire of London in 1666 that launched him on his new career. It was then, together with the diarist John Evelyn and the scientist Robert Hooke, that he helped to plan the rebuilding of the city and, together with Nicholas Hawksmoor and others, embarked on the rebuilding of St Paul’s Cathedral, begun in 1675, plus 51 other churches - all notable for their graceful spires and towers. His work included St. Mary-le-Bow, Cheapside, Trinity College library in Cambridge, and the magnificent Greenwich Hospital beside the Thames. Wren’s style had a strong impact on English architecture both at home and in possessions overseas. He was knighted in 1673 and elected president of the Royal Society in 1681, not only for his outstanding service to architecture, but also for his contribution to scientific and medical research. His fine models and diagrams, based on observation, impressed both the French scientist Blaise Pascal and the English scientist Isaac Newton. 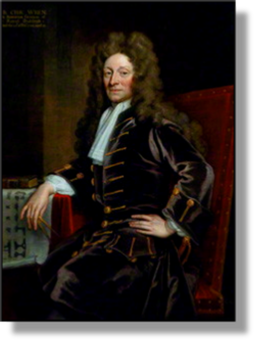 xxxxxThe great English architect Christopher Wren, whose masterpiece, St. Paul's Cathedral, is but one of many fine churches and secular buildings designed by him, came quite late to architecture and never received formal tuition in this subject. A brilliant mathematician, it was not until he became professor of astronomy at Oxford University in 1661 that he began to show a keen interest in architecture. He then submitted designs for a number of buildings, and in 1665 visited Paris to further his knowledge of baroque architecture. The following year, just a month after submitting plans to build a dome on the Old Saint Paul's, the city was devastated by the Great Fire of London. That chance disaster was to launch him on his architectural career, and provide him with ample opportunity to show his exceptional talents in the design and construction of beautiful buildings.

xxxxxWren was born in East Knoyle, Wiltshire, the son of a clergyman. After an unsettled childhood due to the Civil War, he went to study at Wadham College, Oxford, where he showed a remarkable flair for mathematics. The diarist John Evelyn, who meet him at this time is said to have described him as "the miracle of youth". In 1657 he became a fellow of All Souls College, Oxford, and, after three years as professor of astronomy at Gresham College, London, (where he was a founder member of the Royal Society) he returned to become professor of astronomy. It was at this point that he began to show a serious interest in architecture. His first attempts at design - notably the Sheldonian Theatre and the Pembroke College Chapel - showed the influence of the English architect Inigo Jones, but in 1665 he visited Paris to study French baroque architecture and there met, amongst others, Giovanni Lorenzo Bernini. The aged Italian architect allowed him to look briefly through his drawings, and the baroque style he then saw made a deep impression upon the young Englishman. 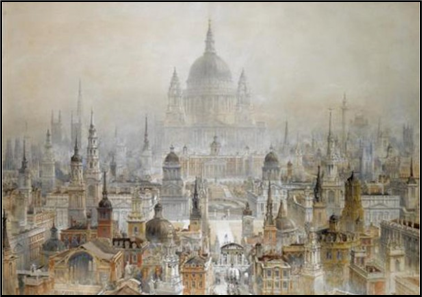 xxxxxAs we have seen, it was after the Great Fire that he, together with John Evelyn and the scientist Robert Hooke, were asked to submit street plans for the rebuilding of the city of London. He, like his fellow commissioners, produced an ambitious "Plan for London" to provide the broad avenues, ample squares and imposing vistas that the great city deserved. It was never adopted. It was felt that so many people had to be re-housed that there was insufficient time or space for such grandiose schemes. Instead, however, first as deputy surveyor and then, in 1669, as surveyor of the royal works, Wren was set the daunting task of designing and supervising the construction of the new cathedral and no less than 51 other churches within the city. This he did, using a restrained baroque style that gave his creations dignity as well as grandeur. Furthermore, he ingeniously varied his designs to fit into various confined spaces and to maximise the potential of the given site. (The illustration is named A Tribute to Sir Christopher Wren). 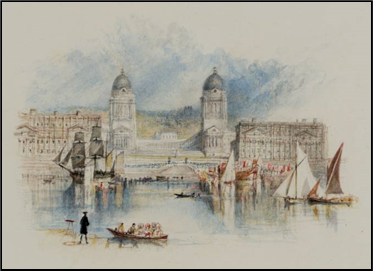 xxxxxAmong the churches he designed - all remarkable for their towers and graceful spires - were St. Mary-le-Bow, Cheapside, and St. Bride's, Fleet Street, both completed by 1678, and St. Clement Danes, opened in 1680. He was also responsible for Marlborough House in Pall Mall (altered many times since), Chelsea Hospital, the Ashmolean Museum in Oxford, Trinity College library in Cambridge, the imposing facade for the south and east wings of Hampton Court Palace, and the magnificent Greenwich Hospital for Seamen beside the Thames, begun in 1694 and later used as a naval college and maritime museum (here illustrated). All these buildings proved a joy to behold, beautifully proportioned, exquisitely built and decorated, baroque in style yet graceful in their classical design. And it was fitting, no doubt, that the man who achieved so much because of the Great Fire of London should be the man to design its monument. Completed in 1677, the Roman Doric column stands today in Pudding Lane, close to where the fire began. Designed as a means of studying the stars, it proved too small, and, via an internal stairway, is now used to obtain a good view of London from its top. 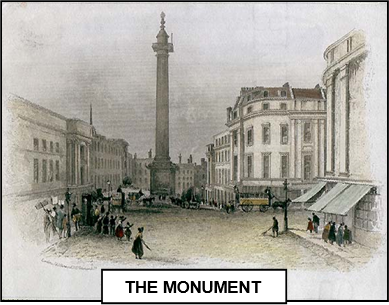 xxxxxAmong the architects who assisted Wren in his work was the Englishman Nicholas Hawksmoor. He later worked alongside John Vanbrugh in the building of the country mansions Castle Howard in Yorkshire and Blenheim Palace in Oxfordshire. Also numbered among his friends was the Scottish Neo-Classical architect James Gibbs.

xxxxxWren was knighted in 1673 and elected president of the Royal Society in 1681. He later served many years as Member of Parliament for Old Windsor. The honours bestowed upon him were not solely for his achievements in the field of architecture, great though these were, but also in recognition of his services to science. He made advances in methods of etching and engraving, experimented with animals in an early attempt to develop blood transfusion, and he was responsible for the making of an artificial eye and the invention of a self-recording rain gauge, the first of its kind. His scientific research, based on observation and recorded by the making of models and fine diagrams, is said to have much impressed the French scientist Blaise Pascal and the English scientist Isaac Newton.

xxxxxWhen he died at his London home in St. James' Street in February 1723, the country's most famous architect was buried in St. Paul's Cathedral, the site of his greatest achievement. His epitaph, written by his son, ends with the words: Lector, si monumentum requiris, circumspice - "Reader, if you seek his monument, look about you". Needless to say, the style evolved by Wren had a strong impact upon English architecture in the coming Georgian period, as well as in Britain's colonial possessions, particularly those in the New World.

xxxxxThe rebuilding of St. Paul’s Cathedral was not without its difficulties. Wren’s first two designs were rejected, the one considered too modest, the other too extravagant. A compromise, known as the Warrant Design, was accepted, and work was begun in 1675, but with Wren constantly on site many “modifications” were made. Completed in 1710, it was the largest Protestant church in England, and, with its magnificent dome, closely rivalled St. Peter’s in Rome for size and grandeur. Built of Portland stone in the form of a Latin cross, its vast dome was flanked on both sides by ornate bell towers, and its overall design was a pleasing blend of baroque exuberance and a dignified, classical style. Like Westminster Abbey, it came to be used as a burial place for many of the nation’s most famous people. 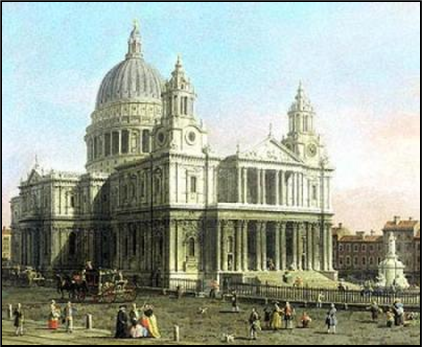 xxxxxAs one would expect, the rebuilding of St. Paul’s Cathedral was not without its difficulties, especially over the style the new building should take. Wren’s first design model of 1670 proved too modest, whilst the second one, the Great Model of 1673 - some 20 feet long and still to be seen in the cathedral today - was thought to be “over the top”. Wren was obliged to produce a compromise. Known as the Warrant Design, this was accepted, and work started in 1675. However, with Wren constantly on the site, the superb building that eventually rose from the ashes bore little resemblance to the Warrant Design!

xxxxxThe first service to be held in the new cathedral took place in 1697, but it was not until 1710, with the completion of the dome, that the work was finished. The construction took 35 years and, unusually for such a large undertaking, was built under the supervision of the one architect. In the 1690s some concern was voiced over the length of time the project was taking, and half of Wren’s salary was withheld until the cathedral was officially declared finished in 1711! 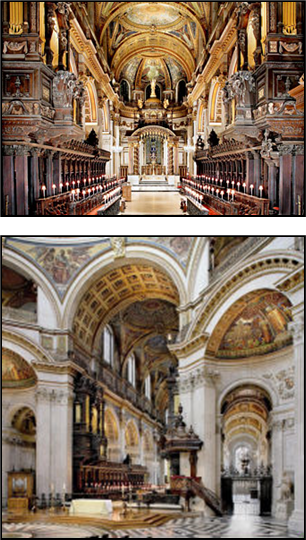 xxxxxThe cathedral church of the city of London, the largest Protestant church in England, is one of the world's most impressive domed buildings, closely rivalling the Basilica in Rome in size and grandeur. Constructed of Portland stone, it was built in the form of a Latin cross, surmounted by a vast dome based on a pillared drum, and flanked on both sides by ornate bell towers. Throughout its construction, baroque exuberance was tempered by the inclusion of a more dignified, classical style. As in the case of Westminster Abbey, over the years the cathedral came to be used as the burial place for many of the country's most famous people.

xxxxxIncidentally, the story goes that when Wren, standing amongst the rubble, was working out the site for the new cathedral, he asked one of the workmen to bring him a stone to mark a certain spot. The man brought him a piece of broken tombstone. On one of its sides, inscribed in Latin, was the word Resurgam, meaning "I shall rise again". Wren took this as a good omen, and so it proved to be. ……