END OF THE ENGLISH CIVIL WAR

xxxxxAs we have seen, following the execution of the king in January 1649, both Ireland and Scotland gave support to his son, Charles Stuart. Cromwell was obliged to overthrow a rebellion in Ireland and then defeat the Scots at the Battle of Dunbar in 1650. But the end of the civil war did not come about until he gained a resounding victory over “Charles II” at the Battle of Worcester in January 1651, routing his outnumbered forces in a two-pronged attack on the city. It was only with great difficulty that Charles Stuart managed to escape to the continent. There he remained until the failure of the Commonwealth and his return as Charles II in 1660.

xxxxxAs we have seen, the death of Charles I in January 1649 did not bring an end to the fighting. His son, Charles Stuart, was now recognised as “Charles II” by both Ireland and Scotland, and the struggle between Crown and Parliament was resumed. Cromwell was obliged to go to Ireland to overthrow a major rebellion, and he followed this up the following year with an outstanding victory over the Scots at the Battle of Dunbar. But the final end to the civil war did not come until September 1651 when Charles Stuart was himself defeated at the Battle of Worcester and forced into exile.

xxxxxAt Scone in January 1651 Charles Stuart, after acknowledging that his father had made mistakes, accepted the Scottish crown at the hands of Archibald Campbell, the earl of Argyll. Then, in a desperate attempt to regain the throne, he mustered a Scottish army of some 10,000 men and, marched south. He 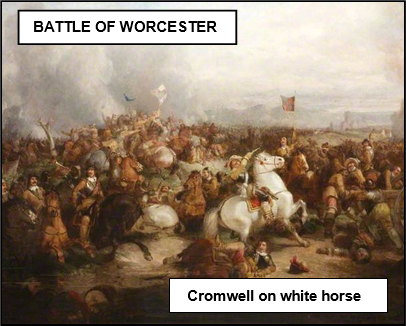 was proclaimed king at a number of points on route, including Carlisle, and reached Worcester towards the end of August. Here he set up his headquarters in the Commandery, a fortress near the cathedral, but his army was not big enough for the task ahead. On his arrival, the parliamentary leader Cromwell, commanding a far greater force, attacked the town from both east and west. Early in September his forces gained entrance and quickly put the Royalists to flight.

xxxxxFor Cromwell, this victory marked the height of his military career, and put the seal on a long line of battles expertly fought and brilliantly won. Top on the agenda now was the need for political and social reform in order to create a workable and acceptable form of republican government. For Charles Stuart, on the other hand, the Battle of Worcester very nearly marked the end of his hopes to gain the throne his father had lost. He only just managed to escape from the town and, so the story goes, hid for some time in an oak tree near Boscobel House, Shropshire. He was then on the run for some 40 days, hunted throughout England. It was thanks to the support of a small number of loyal subjects that he eventually managed to escape to the continent in the October. Here he was to spend some eight years in exile. (Later, on becoming king, Charles II related an account of his escape to the famous diarist Samuel Pepys, who took it down in shorthand).

xxxxxIncidentally, Charles escaped to France on a coal brig named Surprise, owned by a Captain Nicholas Tettersell. To commemorate the event, the “Royal Escape” yacht race is held every year from Brighton to Fecamp in Normandy. Later Charles rewarded Tettersell, and with the money he received he bought the Old Ship Hotel - still in business today.

xxxxxThe English Civil War had been, in essence, a struggle for political power between Crown and Parliament, a struggle embittered by a religious dispute between the strong Puritan element in parliament and the "High Church" Anglicanism favoured by Charles I. By the summer of 1642 it was clear that war had become inevitable. The early battles, notably that of Edgehill in October 1642, proved indecisive, but a number of engagements clearly went in favour of the Royalist forces. In 1644, however, Parliament won a major victory at the Battle of Marston Moor, and followed this up a year later with a decisive win at the Battle of Naseby. Charles I was captured, but negotiations for some kind of settlement were dashed in 1648 when a Scottish army, having made a secret arrangement with the king, invaded England in his support. The defeat of this force at the Battle of Preston sounded the death knell for the king. He was tried early in January 1649 and executed on a charge of treason. 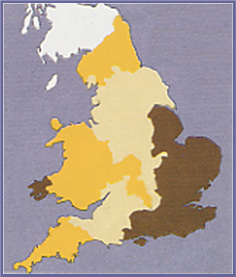 xxxxxThe broad reasons for the defeat of the Royalist forces in the Civil War are not difficult to recognise. Throughout the nine year struggle, the Parliamentarians had three major advantages. Firstly, they retained the support of the navy, and this, together with their hold on London and most of the major ports and towns, gave them control over all foreign trade and a greater freedom of movement. (On the map yellow shows the Royalist areas and brown those held by Parliament). Secondly, they had by far the more competent military leaders. General Thomas Fairfax and Oliver Cromwell, for example, were very capable tacticians. Cromwell, in particular, showed a remarkable flair as a cavalry commander, proving able to regroup his force after a charge and use it to good effect elsewhere on the battlefield. The Royalists were not without good commanders, such as the dashing Prince Rupert, but their efforts were not co-ordinated and were often limited as a result. 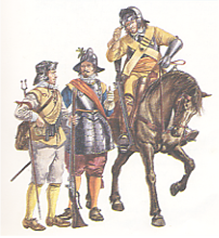 xxxxxThirdly - and perhaps above all - was the quality of training received by the Parliamentary troops. Cromwell's disciplined and highly trained cavalry, later dubbed the "Ironsides", played a major part in the Battle of Marston Moor, whilst the creation of the New Model Army in 1645, mainly the work of General Fairfax, was the nearest so far to a professional force - well trained and equipped, regularly paid, and led by officers who were promoted on merit not on their social status. The use of this army at the Battle of Naseby brought about the overwhelming defeat of the Royalists, both their troops and their cause. And it went on to crush the Irish rebellion, and make light work of the Scots at the Battles of Dunbar and Worcester.

xxxxxThe reasons for the defeat of the Royalists came down to three basic factors. Firstly, the Parliamentarians had the support of the navy and held London and the major cities and ports. This gave them greater freedom of movement. Secondly, their military leaders, notably Cromwell and Fairfax, were more competent both in general strategy and battle tactics. Thirdly, the high quality of the training received by the Roundheads, evident in Cromwell’s “Ironsides” and the New Model Army, proved decisive on the battlefield where, ultimately, the result of the conflict was decided.