xxxxxThe English writer Mary Wollstonecraft, a passionate advocate of equality for women, published her A Vindication of the Rights of Women in 1792, arguing that women’s education should be geared to develop their natural abilities, not to serve and flatter men. An earlier work, A Vindication of the Rights of Man (1789), came out strongly against slavery and the treatment of the poor, and regarded the monarchy and church as oppressive regimes. The original feminist, she was a member of a group of radical intellectuals which included her husband, William Godwin, Joseph Priestly, Thomas Paine, William Blake and, later, William Wordsworth. Her writings influenced the suffragette movement of the 19th century. She died giving birth to Mary, the future author of Frankenstein, and wife of the poet Shelley. 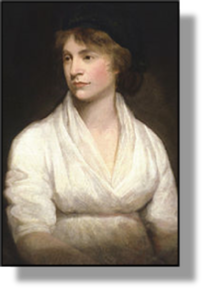 xxxxxThe English writer Mary Wollstonecraft was born in London and, after running a school with her sisters, and working as a governess in Ireland, went to work for the London publisher Joseph Johnson in 1787. As a passionate advocate of equality for women, especially in education, it was there in 1792 that she published her controversial treatise A Vindication of the Rights of Women, a work which was later to have an influence on the suffragette movement of the 19th century. Women’s natural abilities, she argued, were being suppressed because their education was simply geared to serve and flatter men. “Let a woman share the rights,” she proclaimed, “and she will emulate the virtues of man.” Such views shocked a number of her contemporaries, one of whom described her as “a hyena in petticoats”! 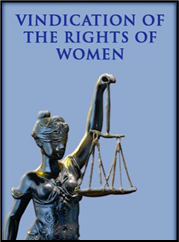 xxxxxHer fight for the rights of women was influenced early on by the works and preaching of the Welsh political and moral philosopher Richard Price. She came to know him when she was working as a young school teacher in Newington Green, London, and, having been won over by his ideas on egalitarianism, used them in her support for the equality of women. And it was while in London that she had a brief affair with the Swiss artist Henry Fuseli.

xxxxxIn 1792, to study the French Revolution at first hand, she went to Paris. Here she passed herself off as the wife of an American, Captain Gilbert Imlay, but he deserted her soon after the birth of their daughter, Fanny, in 1794, and she then returned to England. She later married the writer and philosopher William Godwin, and died giving birth to their daughter Mary - the future author of the horror tale Frankenstein, and second wife of the poet Percy Bysshe Shelley.

xxxxxOther works included Thoughts on the Education of Daughters in 1787 - an earlier plea for women’s rights - and, two years later, A Vindication of the Rights of Man, a response to Edmund Burke’s Reflections on the Revolution in France - an attack directed against her friend Richard Price. Here she came out strongly against slavery and the treatment of the poor, and regarded the monarchy and the church as oppressive regimes. The original feminist, shexwas a member of the “English Jacobins”, a group of radical intellectuals which used to meet at the home of her publisher Joseph Johnson (1738-1809). Members included her husband, William Godwin, Joseph Priestly, Thomas Paine, William Blake and, later, William Wordsworth.

xxxxxIncidentally, the portrait of Mary Wollstonecraft above was by the English artist John Opie (1761-1807), a self-taught genius who was known as the “Cornish Wonder”. He also painted portraits of Samuel Johnson and Edmund Burke, and later turned to genre scenes. Apart from his fashionable portrait painting, he also gained a reputation for his historical pictures. These included Assassination of James I of Scotland in 1786, and The Murder of Rizzio in 1787, the work which earned him membership of the Royal Academy.

xxxxxWilliam Godwin (1756-1836), who married Mary Wollstonecraft in 1797, was a social philosopher and novelist. Early in his career he was a non-conformist minister, but he later became an atheist. His major work, Enquiry Concerning Political Justice and Its Influence on Modern Morals and Happiness, opposed any form of government, arguing that man was innately good, and should therefore be left completely free to determine his own life. Social institutions were evil, imposing their own ideas and blurring reality. His other works included the novel Things as They Are or The Adventures of Caleb Williams (promoting his philosophical views), a pamphlet Of Population, and a number of novels, some written for children. He published Tales of Shakespeare by Mary and Charles Lamb, wrote a biography of Geoffrey Chaucer, and in 1798 published the letters of his wife under the title Memoirs of the Author of the Rights of Women. 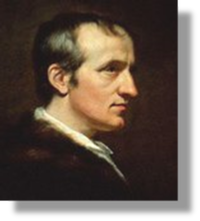 xxxxxWilliam Godwin (1756-1836), who married Mary Wollstonecraft in 1797, was a social philosopher and novelist. He was born in Wisbech, Cambridgeshire, and studied at the Dissenting Academy at Hoxton, near London. An ardent campaigner for civil liberties, he was a non-conformist minister early on in his career, but later became an atheist. His atheism and the idealistic liberalism he developed in his writings anticipated the English romantic movement. 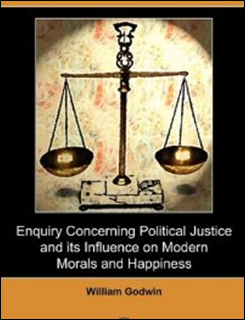 xxxxxIn his principal philosophical work, Enquiry Concerning Political Justice and Its Influence on Modern Morals and Happiness, published in 1793, he argued in favour of an anarchical society - one without external restraint - in the belief that people, being innately good, were essentially rational in their behaviour, and would use reason to determine the right choice. This doctrine of extreme individualism came out of a total rejection of conventional forms of government. Social institutions, he argued were inherently evil and tyrannical because they restricted personal freedom and, by imposing their own ideas upon individuals, blurred reality. In their place, he saw people living in small self-sufficient communities wherein co-operation was not essential, and land was at the disposal of those whose need was greatest.

xxxxxAmong his other works are his ingenious novel Things as They Are or The Adventures of Caleb Williams, an indictment of society which promotes his philosophical views, The Enquirer (a collection of essays on education and economics), and Of Population, a pamphlet in response to Thomas Malthus’ writings on this subject. Later in life he wrote a History of the Commonwealth in England and Thoughts on Man, His Nature, Productions and Discoveries. Included in his novels, some written for children, were St. Leon, Fleetwood, Mandeville and a collection of Fables. He wrote a biography of Geoffrey Chaucer and, as a publisher, he produced Tales from Shakespeare by Mary and Charles Lamb and, in 1798, published the letters of his first wife, Mary Wollstonecraft, under the title Memoirs of the Author of the Rights of Women.

xxxxxIncidentally, as noted above, Mary, his daughter by his first wife, Mary Wollstonecraft, became the second wife of the English poet Percy Bysshe Shelley, and was author of Frankenstein, the tale of horror published in 1818.