John I of Portugal

xxxxxAs we have seen, in 1139 (ST) Afonso Henriques seized control of Portugal as far as the river Tagus. By his death in 1185 his title to the new kingdom had been recognised. During the reign of Afonso III the southern area was also captured (1250), and the capital was moved from Coimbra to Lisbon. Troubles then broke out with Castile, but in 1385 King John I won a decisive victory over this neighbouring state at the Battle of Aljubarrota. In 1386 he allied his country with England by the Treaty of Windsor, an alliance which was cemented the following year by John I's marriage to Philippa of Lancaster, daughter of John of Gaunt. This treaty marked the beginning of a long friendship between the two countries. John proved an able monarch but, as we shall see (1419 H5), it was his son Henry the Navigator, who, directing a programme of exploration, was to put Portugal on the world map.

xxxxxAs we have seen, in 1139 (ST) Afonso Henriques defeated Queen Teresa, his mother, at the Battle of Sao Mamede, and seized control of Portugal, then a strip of land along the Atlantic coast of the Iberian peninsular. He assumed the title of king and set about expanding and consolidating his kingdom. He secured independence from the neighbouring kingdom of Leon and then went on to capture the city of Lisbon in 1147. By the time of his death in 1185 his title had been recognised by the pope and the new, independent state of Portugal stretched southwards as far as the River Tagus. 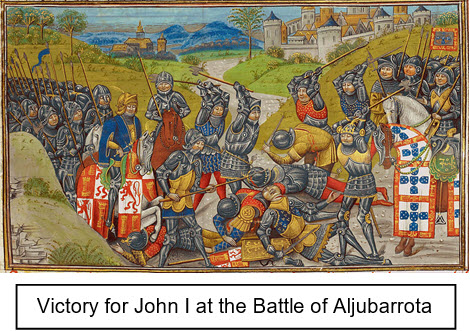 xxxxxAt that stage the Moors remained a formidable opponent. In 1196 (R1), for example, the Almohad army won a resounding victory over the forces of Alfonso VIII, king of Castile at the Battle of Alarcos. However, Alfonso lived to wreak his revenge. His defeat of the Almohads at the Battle of Las Navas de Toloso in 1212 (JO) marked the beginning of the end of Moorish power in the Iberian peninsular. By 1250, in the reign of the fifth king of Portugal, Afonso III, both areas south of the Tagus - centred around Alentjo and Algarve - had been occupied and taken into the kingdom. And during this reign, too, the capital was moved from Coimbra to Lisbon. Therexxfollowed a period of troubled relations with the neighbouring kingdom of Castile, but when John I (1385-1433) came to the throne he defeated Castile decisively at the Battle of Aljubarrota in 1385, a victory assisted by the presence of some English archers. Border fighting continued but peace was finally agreed in 1411.

xxxxxIt was then in 1386, the year following his victory at Aljubarrota, that John allied his country with England by the Treaty of Windsor, an alliance of peace and friendship which was to prove the corner-stone of a long understanding between the two countries. And this alliance was cemented in 1387 by John's marriage to John of Gaunt’s daughter, Philippa of Lancaster.

xxxxxJohn (illustrated), first monarch of the House of Aviz, proved a popular and industrious monarch, and his conquest of the city of Ceuta on the Moroccan coast in 1415 marked the very beginning of the Portuguese empire. As we shall see, however, (1419 H5), it was his son, Henry the Navigator, who was to steal the headlines, directing a programme of exploration which, given time, was to make Portugal one of the greatest colonial powers in the world.

xxxxxHowever, it was not all plain sailing for the new state of Portugal. As we shall see, the death of Henry the Cardinal King in 1580 (L1) brought an end to the Aviz dynasty. Amid the confusion that ensued, the Spanish launched an invasion, won the Battle of Alcantara, and seized Portugal and its empire. There followed what came to be known as the Sixty Years’ Captivity. Independence was not officially regained, in fact, until the Treaty of Lisbon in 1668 (C2).