xxxxxThe American inventor Eli Whitney invented his cotton gin in 1793, while staying on a plantation near Savannah, Georgia. Designed to separate short-staple fibre from its seeds, it revolutionised the industry by its rapid speed of production, quickly making cotton the cheapest and most used textile fabric in the world. But the machine was so simple in design, and so easy to copy, that Whitney gained little reward from his invention. In 1798, therefore, he turned to the manufacture of firearms, and made a thriving business by introducing methods of mass production. He made machine tools designed to produce interchangeable parts, and divided his labour force so that employees, working on an assembly line, were only required to learn one particular skill. His introduction of the factory system, plus the invention of his cotton gin, contributed greatly to the Industrial Revolution. 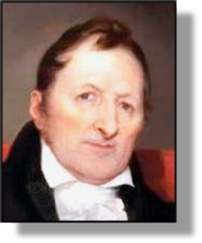 XxxxxThe American inventor Eli Whitney was born in Westborough, Massachusetts, and, after attending Yale University, planned a career in teaching. In 1792, however, he travelled to the South in search of a job and, while near Savannah, Georgia, stayed at Mulberry Grove, the plantation home of Catherine Greene, widow of Nathanael Greene - the patriot general in the American War of Independence. It was while there that, being of a scientific frame of mind, he spent some time inventing a cotton gin, a machine which, though exceedingly simple in design, was to bring about a revolution in the production of cotton in the United States, and have repercussions world wide. 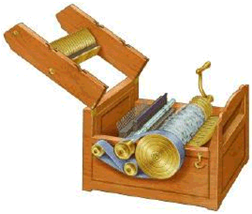 xxxxxThexfollowing year (1793), in partnership with the plantation’s manager Phineas Miller (1764-1803), he built the first of his cotton gins. Devised to separate the short-staple fibre from its seeds - until then done tediously by hand - it proved capable of producing some 50lbs of cleaned cotton a day. Housed within a box, it consisted of a series of spiked teeth mounted on a revolving cylinder. When this was turned by a handle or crank, the cotton fibre was pulled through a fixed comb, thereby detaching the seeds from the lint. At the same time, a rotating brush, turning in the opposite direction, brushed the fibrous lint 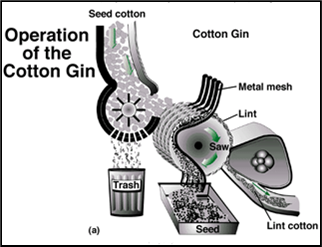 from the spikes. The machine’s speed of action, later enhanced by horse-power and then water power, transformed the cotton industry, making southern cotton a highly profitable crop. It is estimated that the country’s cotton production leapt from 6,000 bales in 1792 to 100,000 bales by the turn of the century. This vast increase in cotton fibre had enormous knock-on effects. In America, textile mills sprang up across the eastern states - especially in New England - whilst the cotton industry in Europe, notably in northern England, received a colossal boost. Within a few years cotton was the top cash crop in the United States, and the cheapest and most used textile fabric in the world.

xxxxxBut Whitney and his partner gained little financial reward from this invention. His cotton gin was so simple in design, and so easy to reproduce, that they soon gave up any attempt to defend their patent, taken out in 1794. As a result, four years later, having won a federal government contract for the manufacture of 10,000 muskets, Whitney turned his organising and technical skills to the large-scale manufacture of firearms. At his factory in Hamden, near New Haven, Connecticut, he greatly speeded up output by introducing methods of mass production in an industry hitherto dependent upon individual craftsmen. He made a series of machine t

ools specially designed to make interchangeable parts, and this, together with a division of labour - whereby employees specialised in one particular skill - meant that the muskets could be produced without the need of skilled gunsmiths. Indeed, his production methods came close to the modern assembly line technique. Later, in 1818, Whitney also invented the first milling machine for the development of improved machine tools (illustrated), an important element in the success of his factory system.

xxxxxBy his simple but highly effective cotton gin of 1793, his methods of mass production, introduced in his manufacture of firearms in 1798, and his invention of the first milling machine in 1818, Whitney made a remarkable and valuable contribution to the Industrial Revolution, a movement which was continuing to gather pace during this period. 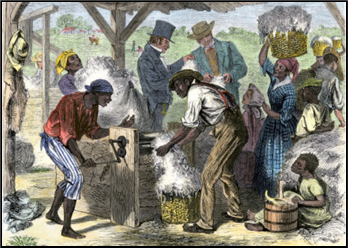 xxxxxIncidentally, an undesirable outcome of Whitney’s cotton gin was the effect it had on slavery in the American South. At a time when a number of individual states were abolishing slavery, starting with Rhode Island in 1774, the improved production in the cleaning of cotton resulted in a vast increase in the demand for field hands to raise and pick cotton. Thus the plantation system, and Negro slavery, became more deeply entrenched in this area. By the middle of the 19th century the value of a young male slave had increased more than threefold. ……

xxxxx…… Itxwas at this time (1791), that the Englishman John Horrocks (1768-1804) established a small cotton mill at Preston, Lancashire. One of the first of many mills to be built in this area over the next hundred years, this family business expanded rapidly, and eventually occupied a site of some sixty acres. In the 20th century “Horrocks” became a household name in the world of cotton fabric. Initially, much of this success was due to the rapid increase in the production of cotton, brought about by Whitney’s revolutionary cotton gin in the 1790s.