xxxxxArthur Wellesley, the future Duke of Wellington, first demonstrated his military skill in India. Posted there in 1796 he took part in a number of campaigns and, during the Second Anglo-Maratha War, gained a significant victory at the Battle of Assaye in 1803. During the Napoleonic Wars he commanded the British expeditionary force during the Peninsular War (1808-1814), and his tactics there - notably his scorched-earth policy and rearguard actions - kept the French tied down. He won the battles of Oporto, Talavera and Salamanca, and then in 1814 went on the offensive, winning the Battle of Vitoria, and driving the French out of the peninsula. When Napoleon escaped from Elba, he was made commander-in-chief of the Allied forces, and it was his army, together with support from Prussian units, that defeated Napoleon at the Battle of Waterloo in June 1815. Honours were heaped on him, and he was created 1st Duke of Wellington. On returning to England he was drawn into politics, and on this “battlefield” he was less successful. He became prime minister in 1828, but, as we shall see, his strong opposition to the Reform Bill of 1832 (W4) lost him a great deal of support for a time, both in parliament and among the public at large. 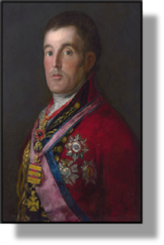 xxxxxArthur Wellesley, the future Duke of Wellington, was born in Dublin, Ireland, the fifth son of the Earl of Mornington. He was educated at Eton College, and then attended the Military Academy at Angers in western France - showing little promise as a soldier at that time. He joined the British army in 1787 - reluctantly we are told - and after active service in the unsuccessful campaign against the French in Flanders in 1794-1795 - led by the Duke of York - he was posted to India in 1796. It was here, as a colonel, that he received his first independent command and showed his military prowess. He took part in a number of campaigns, and earned a knighthood in the Second Anglo-Maratha War when he defeated the Sindhia of Gwalior at the Battle of Assaye in 1803. His leadership qualities during this fighting, particularly his sound knowledge of logistics (the supply of military material), impressed his superiors.

xxxxxWith the outbreak of the Napoleonic Wars, he led only brief campaigns against the French and their allies in Hanover and Denmark, but then in 1808 was appointed commander-in-chief of the British expeditionary force being sent to Portugal. As we have seen, the success of his campaigns in both Portugal and Spain - in what came to be known as the Peninsular War - made him a national hero. By a series of victories, which included those of Operto and Talavera de la Reina in 1809, Salamanca in 1812, and Vitoria the following year, he eventually expelled the French from the peninsula and, crossing the Alps, captured the city of Toulouse in southern France in April 1814, (just four days after Napoleon’s first abdication). During this hard-fought war he gained fame with his scorched earth policy - a tactic which deprived his enemy of a ready food supply - and for his “lines of Torres Vedras”, the string of fortifications he built outside Lisbon in 1810 by which he successfully defended the city, and thus maintained the British bridgehead. He was made a viscount for his victory at Talavera and, on his return to England, he was showered with honours, created 1st Duke of Wellington, and granted a large estate at Stratfield Saye in Hampshire. 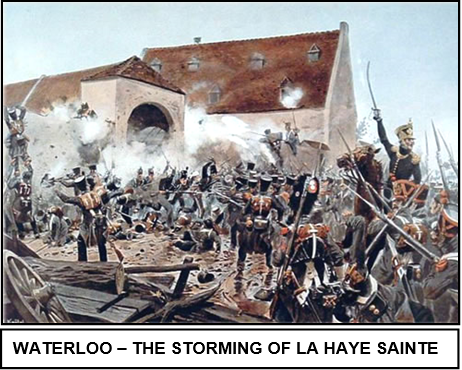 xxxxxAs noted earlier, in February 1815 Napoleon escaped from Elba and, on reaching Paris, mustered a sizeable army. Britain, Prussia, Austria and Russia prepared for war and Wellington - then acting as the British negotiator at the Congress of Vienna - was appointed commander-in-chief of the allied forces. He was quickly caught up in action. In mid-June his army, stationed in Belgium and mostly made up of British and Dutch troops, was attacked by Marshal Ney, Napoleon’s second-in-command, at the Battle of Quatre Bras. Neither side gave ground, but as night fell Wellington decided to withdraw his troops to a more advantageous position just south of the village of Waterloo. Here it was, two days later, that the famous Battle of Waterloo took place (June 1815). Wellington showed exemplary courage throughout the engagement, and encouraged his men on all fronts. A series of ferocious attacks by French infantry and cavalry was successfully repulsed, using tactics he had learnt during the Peninsular War, but at one time his hopes of victory hung in the balance. Late in the afternoon Marshal Ney, having captured the farmstead of La Haye Sainte (illustrated above), managed to open up a gap in the allies’ central front. However, by the time he had received reinforcements to take advantage of this situation, Wellington had regrouped his forces, and a corps of Prussian troops had arrived to give him extra support. It was, as he later admitted, “a damn'd close-run thing."

xxxxxWellington, whilst courageous and dedicated, was not an outstanding military commander. In battle he tended to stand on the defensive, shielding behind his infantry squares and his “thin red line”. As a result he did not always make effective use of his cavalry, and he was sometimes slow in taking advantage of a promising situation. Indeed, early on in the Peninsular War he was severely criticized for his over-cautious approach. And whilst his men respected him and admired his commitment, there was no real bond of affection between them. Unlike Napoleon (and, indeed, Nelson) he lacked the common touch, well-meaning and caring though he was.

xxxxxFollowing his victory at Waterloo, Wellington remained in France for the next three years as commander of the allies’ occupation forces, but in 1818 he returned to England and was drawn into politics. In this “battlefield” his straight forwardness and scrupulous honesty proved something of a handicap! Nonetheless, he served in several Tory ministries, and was prime minister from 1828 to 1830. Conservative by nature (but not always by party) and somewhat loathe to compromise, he was regarded by many as reactionary, and never more so, as we shall see, than in his strong opposition to the Reform Bill, eventually passed in 1832 (W4). It was at this time that he earned the title “the Iron Duke”, but not, it would appear, for the noblest of reasons. 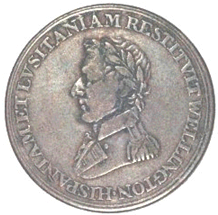 xxxxxIncidentally, Wellington emerged from the Battle of Waterloo as Europe’s supreme hero. His war record, and his subsequent contribution to the making of the peace settlement, earned him an international reputation second to none. When he returned home in 1818 he brought with him the field marshal batons of six foreign countries! But the military commander who had got the better of the great Napoleon was pleased too hang up his famous boots. “I hope to God”, he exclaimed, “that I have fought my last battle.” ……

xxxxx…… Following Wellington’s victory at the Battle of Waterloo those very boots became all the fashion - hence the name “Wellingtons” or “Wellies”. The main difference in these boots compared with earlier styles was that the heels were lower cut, and the tops were only mid-calf high.