xxxxxThe French Rococo painter Antoine Watteau developed the fête galante. A fine example of this genre is his Embarkation for Cythera of 1717, depicting a group of elegant members of court idling away their time in an idyllic, make-believe world of amorous intrigue and gallantry. Other such works are The Foursome, Fête in the Park, and The Music Party. Some of these works have a melancholy undertone, anticipating the ending of such carefree days. He also painted actors and theatre characters such as Pierrot the Clown, and his drawings in three chalk colours - black, red and white - are particularly fine. His work greatly influenced Boucher and Fragonard, and were admired by artists such a Reynolds, Gainsborough, Turner and Monet, and the poets Baudelaire and the Goncourt brothers. 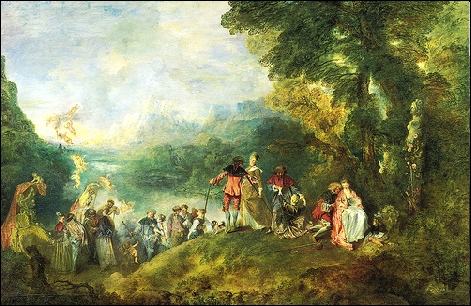 xxxxxAntoine Watteau was the French Rococo painter who developed a new artistic genre known as the fête galante ("a fashionable outdoor gathering"). The Embarkation for Cythera, produced in 1717 (and illustrated here), is typical of this particular style, depicting as it does a group of elegant and refined members of court idling away their time in an idyllic, make-believe world of amorous intrigue and gallantry. In this particular wistful, carefree fantasy, blissful couples are setting sail for the island of Cyprus, birthplace of Venus, the goddess of love. The pastoral setting contains all the characteristics of the Rococo style, and it captures, too, the new spirit of freedom to be enjoyed by those who belonged to high society in the opulent age of Louis XIV. 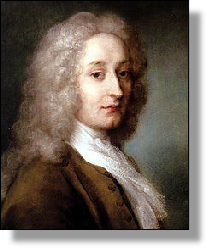 xxxxxWatteau was the son of a roof tiler and carpenter. He was born in Valenciennes, a Flemish town which had only just come into the possession of the French. He started studying art at the age of 14, and his first canvases were of military and tavern scenes, much in the vogue of Flemish painters of his day. In 1702, however, at the age of 18, he travelled to Paris, and his work changed direction. Here he eked out a living making cheap copies of portraits and saints before finding more rewarding work in the theatre, painting scenes for the opera ballet and the Italian comedy (commedia dell'arte) - a very fashionable form of entertainment at that time.

xxxxxA boost to his fortunes came six years later when he started to work for the curator of the Medici Gallery at Luxembourg Palace, and had time to study the old masters. Inspired in particular by the colour and vitality of a cycle of paintings by the Flemish artist Peter Paul Rubens, he began to develop his own individual style. This became characterised, as we have seen, by a delicate portrayal of light, soft pastel colours, and a dreamlike, ethereal quality by which he created an idyllic fantasy world of elegance and sophistication. These qualities combined to elevate the Rococo style to heights never reached before (and never surpassed since). In 1709, he was placed second in the prodigious Prix de Rome art competition, and three years later he was admitted to the French Academy as an associate member. Full membership came in 1717 after he had completed his reception piece, the second and the best of three versions of his pastoral fantasy, Embarkation for Cythera. 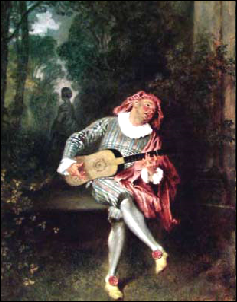 xxxxxAmong his many and charming and elegant fêtes galantes are The Foursome, The Scale of Love, Fête in the Park and The Music Party. Such works have proved highly popular for their relaxed and carefree atmosphere, but, in fact, they often contained an undertone of melancholy and apprehension, as though Watteau was only too aware that these blissful, make-believe days were clearly numbered. The fading autumn light and the setting sun spell out the latent mood. Many of his other works were inspired by his days as a theatre artist, with paintings depicting the Actors of the Comédie Française and Comédie Italienne (painted during a short visit to London), the pierrot Gilles, forerunner of the tragic clown, and the lovesick Mezzetin (illustrated). A work of similar kind, Harlequin and Columbine, is now in the Wallace Collection, London. 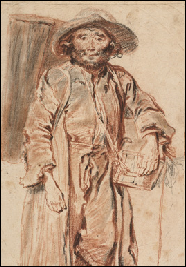 xxxxxAnd special mention must be made of one commission in particular, Gersaint's Signboard. This large canvass was painted in just eight days to advertise the shop of an art dealer friend named Edme Gersaint. Depicting the interior of the gallery, it was hung up outside, but removed just fifteen days later on realisation of its exceptional quality. Now housed in Charlottenburg Castle, Berlin, its unusual use of colour has been seen by some as a forerunner of 19th century impressionism.

xxxxxApart from his technical brilliance, clearly evident in his composition, creation of atmosphere, and the delicacy of his brushwork, Watteau was an extremely skilled draughtsman. This is to be seen not only in his paintings, but also in his exquisite drawings, many executed in the three colours of chalk (the trois crayons) - black, white and red. The drawing illustrated here is of Old Savoyard, a poor immigrant worker, and it is but one of four versions he produced of this character.

xxxxxShown here are three of Watteau’s well-known works: The Music Lesson, Three studies of a Child, and The Toilette.

xxxxxWatteau was not an easy man to get on with. He was restless by nature, seldom satisfied with his work, and his long periods of ill-health often made him irritable and withdrawn. But even though he died prematurely at the age of 37 - a victim of tuberculosis - his influence was substantial. His style was enthusiastically adopted at the court of Louis XV and, as we shall see, François Boucher and Jean Honoré Fragonard followed close in his footsteps, alongxwith his imitators, his able pupil Jean Baptiste Pater (1695-1736) and his one-time friend Nicolas Lancret (1690-1743).

xxxxxLater in the century the fête galante waned in popularity. Amid an age of reason and a long period of social upheaval, his works came to be regarded as frivolous and in bad taste. With the coming of the romantic period in the 19th century, however, his paintings enjoyed a marked revival, with French poets like Baudelaire and the Goncourt brothers singing Watteau's praises, and laying up for him wide public recognition. Meanwhile, in the art world, his admirers were as distinguished and as diverse as Monet, Turner, Gainsborough and Reynolds. 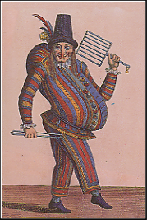 xxxxxIncidentally, the term “rococo” comes from the French word rocaille, referring to the fancy rock and shell work found in grottoes and gardens. The style is light, playful and relaxed, and is aimed at delighting the eye in mythological and pastoral scenes. In architecture, it is noted for the introduction of curves in interior design and a richness (sometimes excessive) of ornamentation. ......

xxxxx...... One of the stock characters in the Commedia dell'Arte (Italian comedy) at this time was Pulcinella, a fool and a rogue. As Mr Punch, he later became a well-known figure in English comedy and seaside entertainment.