THE WAR OF THE SPANISH SUCCESSION

xxxxxAs we have seen, the Treaty of Ryswick of 1697 (W3), bringing an end to the War of the Grand Alliance, was not favourable to France. Louis XIV lost all the lands he had conquered since 1678. But a new and greater conflict was about to engulf Europe, the War of the Spanish Succession. Beginning in earnest in 1702, this was the struggle for the throne of Spain following the death of Charles II. One contender was Charles of Austria, the other was the designated heir, Philippe d’Anjou, grandson of Louis XIV. The fear of a united Spain and France provoked a powerful Grand Alliance against both countries, and this included Austria, Britain, the Netherlands, Denmark and, later, Portugal and Savoy. The French quickly took over the Spanish Netherlands and won some early victories, but over the next seven years the British commander, the Duke of Marlborough - sometimes with the Austrians led by Eugene of Savoy - won a series of battles: Blenheim (1704), Ramillies (1706), Oudenaarde (1708) and Malplaquet (1709). Elsewhere the British seized Gibraltar in 1704 but, combined with the Portuguese, failed in their invasion of Spain in 1707. But all this changed in 1711 with the death of the Austrian Emperor, and the succession of his heir Charles of Austria, then contending for the Spanish throne. Now the need was to stop Austria from becoming a giant in European affairs! The Alliance was dissolved and its members hurriedly made their peace with France, a series of treaties which, as we shall see, came to be known as the Treaty of Utrecht in 1713.

xxxxxAs we have seen, soon after coming to power in 1661 (C2), Louis XIV of France embarked on a programme of expansion, aimed at strengthening his country’s defences on the north and eastern frontiers. His attack on the Spanish Netherlands in 1667, and his long and bitter campaign against Holland, beginning in 1672, brought some success. By the Treaties of Aix la Chapelle in 1668, and of Nijmegen ten years later, he gained the Franche-Comté region (in Burgandy), and acquired a string of fortified towns in Flanders.

xxxxxIn 1688, however, Louis XIV bit off more than he could chew. An attack upon the Rhineland in order to claim the Palatinate provoked a powerful response in the shape of the League of Augsburg. This coalition between the Holy Roman Empire, Spain, Sweden, the Palatinate and the electors of Saxony and Bavaria, was later joined by Holland and England, and became known as the Grand Alliance. Although Louis more than held his own in the land battles, his army began to show the strain, and by the late 1690s he was ready to come to terms. They were far from favourable to him. The Treaty of Ryswick of 1697 (W3) stripped France of virtually all the conquests it had achieved since 1678, and it also obliged Louis to accept William III as the rightful king of England and Ireland. 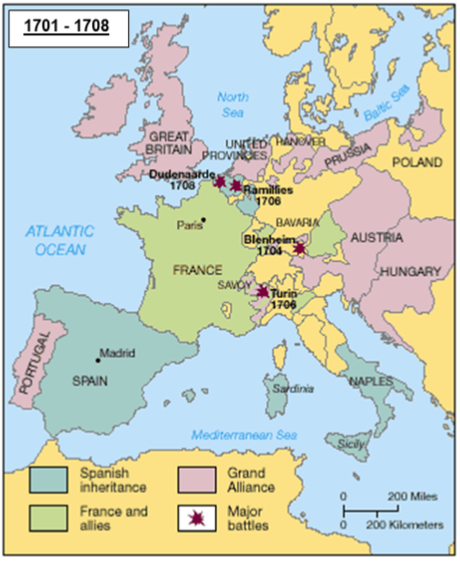 in fact, the Peace of Ryswick, as it is sometimes called, was merely a truce. Looming over Europe’s political horizon was the question as to who was to succeed the sickly and childless Charles II of Spain. A conflict between the two contenders, the Bourbons of France and the Habsburgs of Austria, seemed virtually inevitable. Louis had agreed not to lay claim to the throne when it became vacant, and the Archduke Charles of Austria had been generally regarded as the most suitable candidate, but when Charles died in 1700 and left his throne to Louis XIV’s grandson, Philippe d’Anjou, Louis promptly accepted it on his behalf! The fact that - as Louis is reported to have said - the Pyrenees no longer existed, struck fear into the hearts of practically every country in Europe. The unity of France and Spain - and their empires! - had to be prevented if the balance of power on the continent and at large was to be restored. Another Grand Alliance was thus formed, supporting the candidature of Charles of Austria, and by 1702 Europe was plunged into a long and bloody conflict - the War of the Spanish Succession.

xxxxxThe line up against France, Spain and a number of small principalities in Germany and Italy was impressive, including, as it did, Britain, Austria, the Netherlands, Denmark and, later, Portugal and Savoy. The war was mainly a land conflict, fought principally in Italy, the Netherlands, and the German states. In Italy, where the opening phases of the war began, the French held the initiative until the loss of Turin in 1706. Elsewhere success was shorter lived. ThexFrench were soon in command of the Spanish Netherlands, and they gained early victories at Friedlingen and Hochstadt in Germany, but the English seized Gibraltar in 1704, and in Bavaria the English commander, the Duke of Marlborough, together with Austrian forces under Prince Eugene of Savoy, won a resounding victory at the Battle of Blenheim. The French were virtually expelled from the German states by this setback, and then, two years later, were driven out of much of the Low 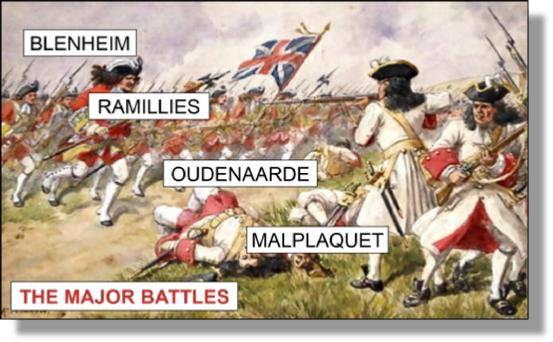 Countries following another defeat at the hands of Marlborough, this time at the Belgian village of Ramillies.

xxxxxByxthis time the Portuguese had joined the alliance. In 1707 they combined with the British and invaded Spain, but the expeditionary force was met by a Franco-Spanish army and routed at the Battle of Almansa (near Alicante). The following year, however, Marlborough and Eugene again defeated the French, this time at the battle of Oudenaarde, near Ghent, and they followed this victory up in 1709 by winning a bloody encounter at the French village of Malplaquet. By now, Louis XIV was anxious to make peace. He was facing defeat on the battlefield, a revolt of the Camisards (French Protestants) at home, and virtual bankruptcy at Court. He offered to renounce his Spanish inheritance, but as he bluntly refused to join the allies in a fight against his own grandson, the conflict dragged on.

xxxxxThen in 1711, events took an unexpected change of direction in favour of a quick settlement. In that year the death occurred of Emperor Joseph I of Austria, and he was succeeded by Charles VI - up till then the favoured candidate for the Spanish throne! This meant that if the war was won against the French and Spanish, then ipso facto the house of Austria would become the predominant power in European affairs! The British at once dissolved the Grand Alliance, and each member was left to make its own individual peace terms with the French! All were willing to do this except for the Austrians, of course, who had everything to lose by putting an end to hostilities!

xxxxxThe peace pacts made with the French came to be known collectively as the Treaty of Utrecht and were conducted, as we shall see, over a two year period, beginning in 1713. It was a settlement of some significance, especially for Great Britain.

xxxxxAs in the reign of William III, where the War of the Grand Alliance spawned a conflict between the English and French in North America - known as King William’s War - so the War of the Spanish Succession brought about Queen Anne’s War. The English quickly quelled Spanish opposition, but faced constant border raids by the French and Indians along the frontier of New England. Another attempt at taking Quebec and Montreal ended in failure, but in 1710 a land and naval force captured Port Royale and occupied Acadia. And success was also achieved against an Indian uprising in North Carolina. By 1712 both the Spanish and French were looking for a settlement. By the Treaty of Utrecht in 1713 the British gained Acadia (renamed Nova Scotia), as well as Newfoundland and the Hudson Bay territory. A troubled peace followed, broken, as we shall see, by the outbreak of yet another conflict, King George’s War, in 1744 (G2). The colonial rivalry between France and Great Britain still had some time to run.

xxxxxAs we have seen, the War of the Grand Alliance of 1689 (W3), resulting from Louis XIV’s attack on the Rhineland, spawned a serious outbreak of hostilities between English and French settlers in North America, known as King William’s War. The English failed miserably in a planned attack upon Quebec, and the conflict came to an end in 1697 after a spate of sporadic attacks upon isolated posts and settlements. The War of the Spanish Succession likewise had its counterpart in North America. Known as Queen Anne’s War (1702-1713) - the second of four French and Indian wars - this trial of strength was to end much more in favour of the British.

xxxxxOn paper, they started this conflict at a decided disadvantage, facing enemies to the south as well as to the west. However, expeditions against the Spanish in Florida and the Appalachian region proved particularly successful. In 1702, indeed, the English colonists captured and burnt down the settlement of Saint Augustine, and there followed no serious attempt at retaliation. The main threat, however, lay along the lengthy and ill-defined frontier of New England. Here French and Indian raiding parties launched surprise attacks upon border settlements, killing many of the inhabitants and taking others into captivity. Particularly brutal was the capture and burning of Deerfield in Massachusetts in 1704, followed by the massacre of many of the town’s people. 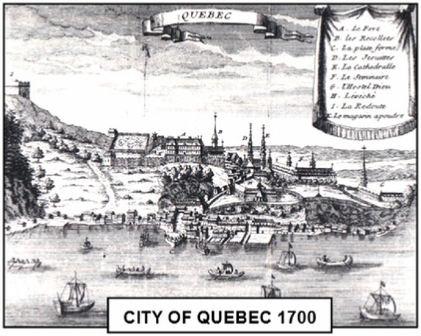 xxxxxFor their part, the English mounted two expeditions against Port Royal in Acadia in 1704 and 1707. These were both unsuccessful, but in 1710 a British naval and military force was sent out to New England, and this managed to capture Port Royal and take possession of Acadia itself. The following year a powerful fleet was sent into the Saint Lawrence to attack Quebec and Montreal, but, as in the earlier attempt in 1690, the project had to be abandoned after a number of ships were wrecked along the treacherous shoreline. Success was achieved in North Carolina, however, where a rising of the Tuscarora Indians was put down after two years of fighting. Furthermore, the longer the conflict continued, the more it worked in favour of the British. The war in Europe against the Grand Alliance was taking its toll on the resources of both Spain and France, and this was having a knock-on effect upon the strength and capacity of their colonial settlements. By 1712 both the Spanish and French colonists were looking for a way out.

xxxxxAfter some lengthy negotiation, agreement was reached at the Treaty of Utrecht in the spring of 1713. Spain retained Florida, and the French kept Cape Breton Island, but the British gained Acadia - later named Nova Scotia - as well as Newfoundland and the Hudson Bay territory (arrowed on map above). This treaty ushered in a period of uneasy peace, but the maritime and colonial rivalry between Great Britain and France was far from over. As we shall see, it broke out again 30 years later in what came to be known as King George’s War in 1744 (G2). In the meantime both sides were probing into the region of the Great Lakes and the Mississippi Valley beyond. There remained plenty of territory to fight over. 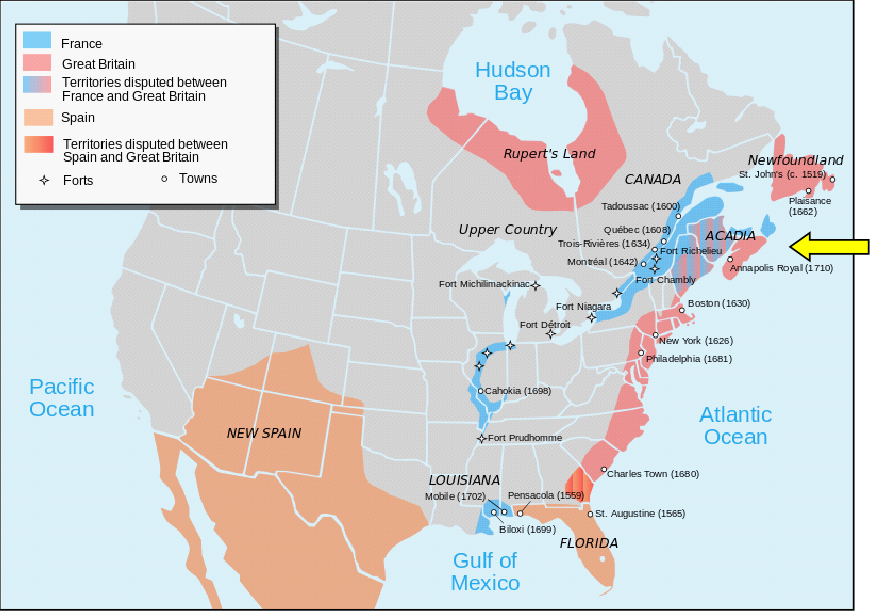