xxxxxAs we have seen (1702 AN), in 1706 Charles XII of Sweden had deposed the Polish king, Augustus II, and replaced him with his own candidate Stanislaw Leszczynski. However, when he lost the Battle of Poltava in 1709, the Russians, anxious to gain control over Poland, restored Augustus. When he died in 1733, Stanislaw attempted to make a come-back, aided by his son-in-law, Louis XV of France, but Russia, supported by Austria, had other ideas. A large Russian army invaded Poland, drove Stanislaw from his throne, and confirmed Augustus III, son of Augustus II, as the Polish king. Meanwhile, further south, the French were joined by Spain and Sardinia-Savoy, both anxious to grab some of the Habsburg real estate in Italy. This they did, but by now the French in particular feared that the British and Dutch might enter the war in support of Austria. It was time to make peace by the Treaty of Vienna in 1735.

THE WAR OF THE POLISH SUCCESSION 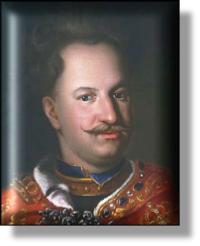 xxxxxAs we have seen (1702 AN), in 1706, Charles XII of Sweden, anxious to secure Poland before invading Russia, had deposed the king, Augustus II, and put in his place his own protégé the Polish nobleman Stanislaw Leszczynski (illustrated). But Sweden's decisive defeat at the hands of Peter the Great at the Battle of Poltava in 1709 not only relegated Sweden to a minor power, it also foreshadowed the loss of Polish independence. From then onwards Poland was going to be in Russia's sphere of influence and suffer as a consequence. It was with Russian support that Augustus II was restored to the Polish throne in 1709, and it was with Russian support that he stayed there. 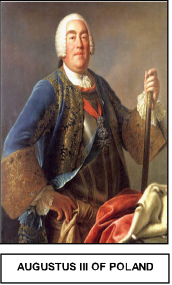 xxxxxHowever, with his death in 1733 the question of the succession raised its ugly head. Two rival claimants emerged. One of them, the former King Stanislaw, wasted no time. In the September, with the backing of the king of France Louis XV (his son-in-law), he was re-elected as king by a diet of 12,000 Polish nobility. But Russia and Austria had other ideas. The Russians in particular feared the revival of a Swedish-Polish alliance, and wanted to have their own compliant candidate on the Polish throne. They put forward Augustus's son as the rightful heir, held their own diet of 3,000 nobles, and had him duly elected as Augustus III. In the meantime, to reinforce their point of view, a Russian army of 30,000 invaded Poland and drove Stanislaw from power. He took refuge in Gdansk, but the Russians promptly laid siege to the city. A somewhat feeble attempt was made to raise the siege by a French naval and military expedition, but it ended in failure. In June 1734 the city fell, and Stanislaw had to make his escape and take refuge in Prussia.

xxxxxAt the same time, another front had opened up in southern Europe. France had declared war on Austria in 1733, and was eagerly supported by Spain and Sardinia-Savoy, both sensing a chance to seize some if not all of the substantial territory held by the Habsburgs in Italy. In pursuance of this aim, a Spanish army of 40,000, led by the Infante Don Carlos (the future Charles III) invaded Lombardy, Naples and Sicily, whilst the French crossed into Lorraine, then part of the Holy Roman Empire. They managed to overrun the duchy, but were stopped from further advance by imperial troops, led by the veteran commander Eugene of Savoy. By now, however, the French in particular were beginning to fear that the British and the Dutch might be tempted to join the conflict in support of Austria. Sensing that it was time to end the war, they agreed to the Treaty of Vienna in 1735.

xxxxxBy the Treaty of Vienna of 1735, Spain gained Sicily and Naples, and Sardinia-Savoy acquired two territories in Lombardy. France also managed to keep hold of Lorraine, taken during the conflict. As far as Poland was concerned, Stanislaw renounced the Polish throne but, by way of compensation, was made Duke of Lorraine until his death, when the duchy was to become part of France. In 1738, when the treaty was ratified, the French agreed that on the death of the Emperor, his daughter, Maria Theresa, would inherit the Habsburg domains. A major result of the war was the growing weakness of Poland. As we shall see (1772 G3a), it was not to be long before this nation was swallowed up by its neighbours. Walpole managed to keep Britain out of the war, but this did not stop the French and Spanish Bourbons from making a "Family Compact" against the British. This did not pose an immediate threat to Britain in Europe, but in North America the fierce rivalry between the French and British was increasing by the day, made the worse, as we shall see, by the founding of a new British colony, Georgia, in 1733. 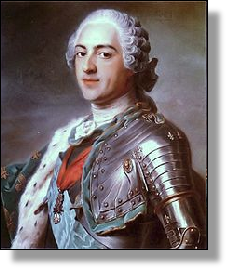 xxxxxThe Treaty of Vienna was held in 1735, though the agreements it contained were not ratified until three years later. By these terms, Stanislaw agreed to renounce the Polish throne in favour of Augustus III, but in return became Duke of Lorraine and Bar until his death, when they were to become French property. In the south, there was a redistribution of Italian territory. Austria ceded both Naples and Sicily to Spain, but received the duchies of Parma and Piacenza. Sardinia-Savoy acquired Novara and Tortona from Lombardy. Then later, at the insistence of the Emperor, Louis XV of France (illustrated) agreed that should the Emperor die without a male heir, his daughter, Maria Theresa, would inherit the Habsburg lands. 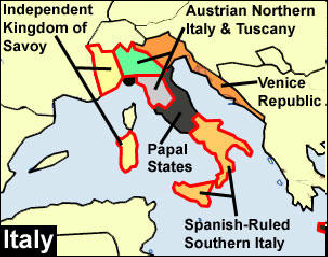 xxxxxAn exchange of ownership in parts of Italy was one result of the War of the Polish Succession. Another, and a very important one, was the growing domination of Russia in Polish affairs. Internally weak and divided, Poland was drifting towards extinction, a pawn amid the growing nations of eastern Europe. As we shall see (1772 G3a), the first partition of that unfortunate country was less than forty years away.

xxxxxIn keeping with Robert Walpole's aim, Britain was kept out of the conflict, but this did not stop the French and Spanish Bourbons from forming a "Family Compact" against the British, the first of three Pactes de Famille over the next thirty years. By the Treaty of Escorial of 1733, France promised to aid Spain in the recovery of Gibraltar, and both set out to disrupt British trade wherever possible. During the continental war that followed, the effect on Britain was minimal, but in North America it was quite another matter. Here, as we shall see, the rivalry between the British and the French was nearing boiling point, and went up a few more degrees in 1733 when Britain founded its new colony of Georgia.