xxxxxAs we have seen, by the Treaty of Westphalia in 1648 (C1), which ended the Thirty Years’ War, Sweden became the dominant nation in the Baltic, a fact reinforced in the 1660s when its warrior king, Charles X Gustav, seized land held by the Danes. But when the young Charles XII came to the throne in 1697, Russia, Saxony-Poland, and Denmark-Norway joined together to cut Sweden down to size. They were in for a shock. In the Great Northern War that followed in 1700, the young king, with the help of his senior officers, drove the Danes back, forcing them to make peace, and then won a resounding victory over the Russians at the Battle of Narva. Then in 1701 he drove the Poles out of Livonia and, as we shall see (1702 AN), brought down their king, Augustus II. But the days of Swedish success were numbered.

THE START OF THE GREAT NORTHERN WAR 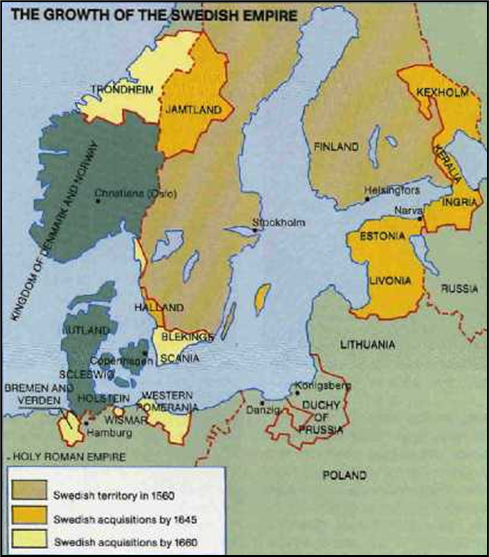 xxxxxAs we have seen, by the Treaty of Westphalia - the peace settlement of 1648 (C1) which ended the Thirty Years War - Sweden, which then included Finland, was assigned certain Baltic provinces, thereby gaining control of the Baltic Sea and becoming the dominant nation in that region. Then, with the arrival on the scene of their warrior king Charles X Gustav in 1654, Sweden again went on the offensive, determined to expand at the expense of those states which had been more seriously weakened by the rigours of the Thirty Years’ War.

xxxxxIn 1655, on a trumped-up charge, he launched an all-out invasion of Poland, but this alarmed his neighbours, Denmark, Russia and the Holy Roman Empire, and they declared war on Sweden. This powerful alliance was too much for Charles Gustav to handle, and he promptly withdrew his forces from Polish territory. Undaunted, however, he now cast his eye on Denmark, and in a daring attack he seized the province of Jutland and forced the Danes to the negotiating table. By the Treaty of Roskilde in February 1658 they had to hand over all the land they held in southern Sweden, together with Trondheim and the island of Bornholm. Further attacks followed against Denmark, but with the death of Charles Gustav in 1659, a series of treaties put an end to the conflict - often referred to as the First Northern War. The Swedes gave back Trondheim and the island of Bornholm, but retained much of the land seized from Denmark. 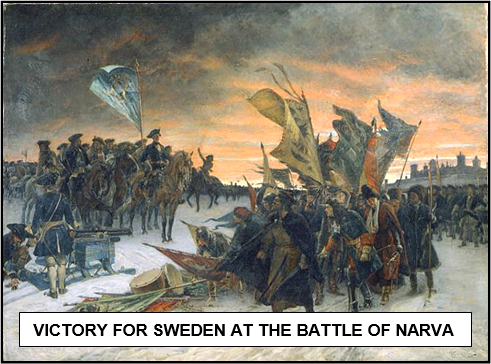 xxxxxA golden opportunity to cut Sweden down to size and put an end to her control of the Baltic came in 1697 when Charles XII, a mere lad of 15 years of age, came to the Swedish throne. In 1700 an alliance formed between Russia, Saxony-Poland, and Denmark-Norway went on the offensive. In February, Saxon troops invaded Livonia in the opening campaign of what came to be known as the Great Northern War. But the coalition had not reckoned with the courage and ability inherent in the young Charles XII, destined to be one of Sweden's greatest monarchs. With the help of his senior officers, he mounted a daring counter offensive in the August. Ferryingxhis troops across the Baltic, he seized Zealand, drove the Danes back, and enforced the neutrality of their king, Frederick IV, at the Peace of Tavendal (now Traventhal). Then barely three months later he turned on the Russians, then laying siege to the city of Narva, and, though heavily outnumbered, virtually destroyed their entire army at The Battle of Narva. Fought in a blinding snowstorm, we are told that the Russian leader, Tsar Peter I, fled from the battlefield crying like a child and determined on revenge. 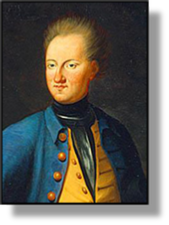 xxxxxAugustus II, king of Poland and elector of Saxony, was the next on the list. In the summer of 1701 Charles XII (illustrated) occupied Courland (now in Latvia), drove the Poles out of Livonia and, as we shall see (1702 AN), completed his highly successful campaign by toppling Augustus from his throne. But for the Swedes, the days of such triumph were numbered. In the fullness of time Russia was to wreak revenge for their disastrous defeat at the Battle of Narva.

The Battle of Narva