xxxxxThe British statesman Robert Walpole entered parliament as a Whig in 1701. A shrewd politician, and an able speaker and administrator, he served under George I as First Lord of the Treasury and Chancellor of the Exchequer, and gained virtual control of the country in 1721 following his astute handling of the financial crisis caused by the bursting of the South Sea Bubble. Having saved the Whig administration from defeat and the monarchy from disgrace, he then went on to dominate the political scene for the next twenty years, assisted by his brother-in- law Charles Townshend up to 1730. He won popular support by his policy of low taxation - made possible by avoiding costly conflict - and he kept himself in power by skillfully “managing” the House of Commons through the granting of royal patronage. A firm supporter of the Hanovarian succession, he faced up to and defeated the Jacobite threat, thereby gaining the confidence of his king and queen. In 1737, however, he was obliged to withdraw his plan to impose an excise duty on tobacco and wine, and this proved a setback. Various factions opposed to his foreign policy and his “corrupt” methods, then mounted a vicious press campaign to drive him from office. Their opportunity came in 1739 when, following a trade dispute, he was forced to go to war with Spain - the so-called War of Jenkin’s Ear. This merged into the larger conflict, the War of the Austrian Succession. Opposed to military intervention on the continent, he resigned in 1742. Regarded as the first “prime minister”, he gave the country a period of peace and prosperity, and helped to develop parliamentary government, though not always along acceptable lines. 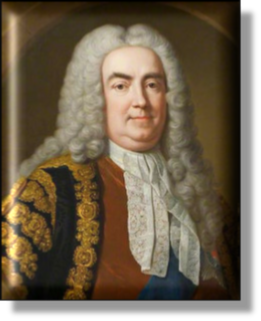 xxxxxThe British Whig politician Robert Walpole, later Earl of Orford, is generally regarded as Britain's first “prime minister”, though the term did not become official until as late as 1905. He served as First Lord of the Treasury and Chancellor of the Exchequer under George I (1715-1717) and (1721-1727), and then for fifteen years (1727-1742) he virtually ran the country, serving as George II’s senior minister. Because both these monarchs spent a great deal of their time on the continent, and neither had a deep understanding of the affairs of government, he was able to build up a powerful system of political administration, based loosely on a cabinet system (informal meetings of ministers), and kept together by his strong personality, the adoption of sound policies, and a skilful use of royal patronage. Every man, he argued, “had his price”.

xxxxxHe was born at Houghton in the county of Norfolk and attended Eton College before going up to King's College, Cambridge in 1696. He entered Parliament in 1701 as an uncompromising Whig and, proving to be a forceful speaker and a sound administrator, was appointed Secretary of War seven years later. In 1712, however, he fell foul of the Tory Parliament and, for a short time, was imprisoned in the Tower of London on a charge of corruption. With the accession of George I, however, he was restored to the cabinet and held office until 1717, when he resigned in protest over the dismissal of his brother-in law, Charles Townshend from the office of secretary of state. Over the next three years he showed consummate skill as an opponent of government policy. 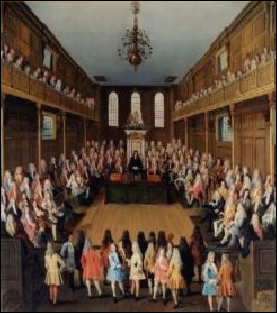 xxxxxIn 1721 he returned to royal favour and political power following his astute handling of the financial crisis brought about by the bursting of the South Sea Bubble. Having saved the Whig Party from certain defeat, and the monarch from certain disgrace, he now took over the guidance of the nation's affairs both at home and abroad - ably supported by Townshend until 1730. A shrewd, political manipulator, he won wide support by keeping taxation low, a policy that was certain to please and was made possible by his careful avoidance of war, and his general support of trade and industry. But despite the strength of his authority, in 1733 he was obliged to give up a plan to place an excise duty on wine and tobacco. This setback marked a decline in his fortunes. Various groups - Jacobites, Tories and dissident Whigs - came together to plot his downfall, many opposed to his foreign policy and his liberal use of patronage, others simply envious of his success. A publication entitled The Craftsman was launched to attack his administration, newspapers poured out a constant stream of abuse against him, and a number of writers, including Jonathan Swift, Henry Fielding, Alexander Pope and the dramatist John Gay, showed him no mercy in prose, poetry and drama. 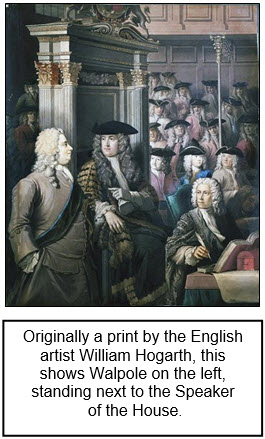 xxxxxThe final blow came in 1739, when his opponents, seizing on a trade dispute with Spain, forced him into the so-called War of Jenkin's Ear, a conflict which merged into the War of the Austrian Succession in 1741. Proving ineffectual as a war leader, the following year he was hounded out of office by an ever growing number of vociferous critics, including the young William Pitt (later Earl of Chatham), himself destined to become a statesman of distinction.

xxxxxDespite his reputation as a political wheeler and dealer - doubtless justified to a large extent - Walpole's administration proved highly successful, providing a useful breathing-space from the burdens of war, and playing no small part in the development of parliamentary government, though not always portraying his methods in the best possible light. A strong supporter of the Hanovarian succession, he took a determined stand against the Jacobites, thereby gaining the confidence of George II and retaining the support of his wife, Caroline of Ansbach. Apart from his political life, Walpole was a leading member of the Kit-Kat Club and cut a figure in high society.

xxxxxIncidentally, it was Robert Walpole, the longest serving of all British “prime ministers”, who presented his home, 10 Downing Street, to the nation, and this house has remained the residence of the British premier ever since. His other home, Houghton Hall in Norfolk, was built and furnished along Palladian lines and contained an outstanding art collection - sold by his grandson, George, to the Empress of Russia in 1779, and now housed in the Hermitage Museum at St. Petersburg. ……

xxxxx…… Today, the stable block at Hougton Hall houses a large collection of model soldiers, put on display by the sixth Marquess of Cholmondeley (1919-1990). Thought to be the largest collection of its kind in the world, it includes a detailed study of the Battle of Waterloo.