xxxxxThe German Richard Wagner decided to become a composer at the age of 15, after hearing works by Weber and Beethoven. After a brief training and a great deal of self-tuition, he took up conducting posts at various provincial opera houses, and, during that period, began composing musical dramas. His first two, The Fairies and Forbidden Love, fared badly, but his next work Rienza, though rejected in Paris, received a hearing at Dresden in 1842. This brought some success, but in the operas that followed, The Flying Dutchman of 1843, Tannhauser of 1845, and Lohengrin of 1850 (the last two based on German legend), his idea that opera should be a total blend of all its components - music, drama, poetry and scenic design - began to take shape, and this was roundly condemned as breaking away from the traditional form. There were those who supported him, like Meyerbeer and his close friend Liszt, but there was little public enthusiasm. In 1849, having taken part in the uprising in Dresden, he was forced to take refuge in Zurich. There, undaunted, he began working on a monumental work made up of four operas, again based on German legend, and developing further his new art form. This task was interrupted for some years during which he wrote treatises on his mould-breaking ideas, and composed his famous love story Tristan and Isolde. In 1861 he was allowed to return to Germany, but without a job and virtually penniless, his musical career seemed at an end. However, as we shall see, his future compositions, notably his cycle of four operas, known as The Ring of Nibelung and produced in 1876 (Vb), were to make him the master of German opera and the champion of the Germanic peoples. 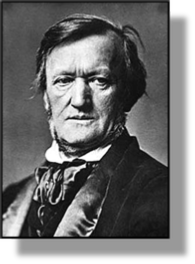 xxxxxIt was the German composer and musical theorist Richard Wagner who changed the whole concept of opera in the 19th century, developing what came to be known as “musical-drama”, a revolutionary new art form which blended together music, drama, poetry and scenic design. Though self-willed and arrogant by nature, he was, nonetheless, an extreme patriot whose monumental operas, based largely upon Germanic myths and legends, came to symbolize for him, and others, the greatness - if not the superiority - of the German peoples.

xxxxxRichard Wagner was born in Leipzig, the youngest of nine children. His father died six months later, and when his mother remarried the following year, the family moved to Dresden. However, following the death of her second husband, an actor and artist, the family returned to Leipzig in 1827. The young Wagner had shown an interest in the theatre from his days in Dresden, and his first plays, such as the spoken tragedy Leubald and Adelaide, produced in 1828 at the age of 15, leant heavily upon his reading of the Greek epics and the works of Shakespeare, Goethe and Schiller. In the same year, however, having heard Weber’s Der Freischutz, an opera based on German folklore, together with some works by Beethoven, he decided to take up music and become a composer. It was a decision which, after a stormy career, was to make him the greatest composer of German opera.

xxxxxHe had six months of basic musical training at Leipzig University over the winter of 1831-1832, but to a very large extent he taught himself the rudiments of composition, mainly by studying the scores of the masters. During this time, and for much of the 1830s, he made a living by taking up conducting posts at the provincial opera houses in Würzburg, Magdeburg, Königsberg, and Riga. To this period belong his first three operas. Die Feen (The Fairies) and Das Liebesverbot (Forbidden Love) - based on Shakespeare’s Measure for Measure - fared badly. The first was turned down by Leipzig, and the second only survived one performance, but later, while at Riga, he completed the libretto and the first two acts of his third opera, Rienzi. Planned on a much grander scale, he felt sure that this had promise. 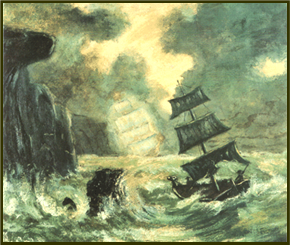 xxxxxBy now, however, living above his means, he had accumulated a large amount of debt. To escape from his creditors, in 1839 Wagner made a brief visit to London, and from there traveled to France in the hope of having Rienzi performed in Paris. Such a hope was soon dashed however, despite efforts on his behalf by the German opera composer Giacomo Meyerbeer, and for the next three years he scraped a living as a hack writer and musical copyist. It was during that period that he became acquainted with the music of Hector Berlioz, completed Rienzi, and composed the music for his next major composition Der fliegende Hollander (The Flying Dutchman) - a story about a phantom ship doomed to sail for ever, conceived earlier during his stormy crossing to England. Eventually, in 1842 Dresden agreed to perform Rienzi, and Wagner and his wife Minna, whom he had married in 1836, moved to the German city.

xxxxxBut his stay at Dresden was not to produce the hoped-for turning point in his career. Rienzi, performed in October 1842 and conforming to the French-Italian tradition was, in fact, a success - despite its five hour length - and, on the strength of it, he was appointed conductor of the court opera, but his good fortune was not to last. The Flying Dutchman, performed the following year, began to reveal Wagner’s innovative style, and was severely criticized for breaking away from the traditional structure and techniques of the accepted operatic form. 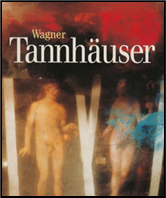 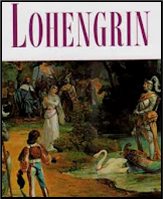 xxxxxNor did his next two works fare any better. The romantic opera Tannhauser, staged in 1845 and inspired by Germanic legends (as was all his future work) was seen to stray too far from the conventional, and in 1848 the Court Theatre at Dresden refused to stage his next work, the romantic opera Lohengrin. Both were produced at Weimar a few years later, but only through the good offices of his friend the Hungarian composer Franz Liszt, whom he met in 1848. Although his new concept of opera had been somewhat foreshadowed by the ideas of Claudio Monteverdi and Christoph Gluck, theatre audiences were not yet ready for long, overpowering Wagnerian dramas, in which the mystic theme, the words and the compelling, romantic music were fused as one.

xxxxxThen in 1848, with his debts mounting once again, Wagner, was suddenly thrust into the political limelight. As an extreme radical he became embroiled in the revolutionary movement sweeping across Europe. He took an active part in the uprising, and produced a number of articles in favour of the revolution. As a result, when the rebellion was crushed in Dresden in 1849, a warrant was issued for his arrest. Wagner fled the country and, after a brief stay with his friend Liszt - then rehearsing Tannhauser at Weimar - he escaped to Zurich in Switzerland. 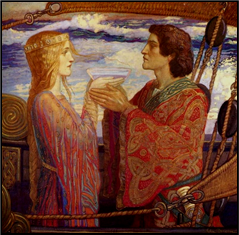 xxxxxAt Zurich, denied any hope of returning to Germany, at least in the near future, he abandoned composing for a time and turned to writing. He wrote a series of treatises setting out his ideas on the future development of opera (notably in his The Artwork of the Future and his Opera and Drama), and he also produced four operatic poems, beginning with Siegfried’s Tod (Siegfried’s Death), based on Teutonic myths. These were to feature later in his famous cycle of four operas entitled Der Ring des Nibelung (The Ring of the Nibelung). Thus inspired, in 1853 he began to compose the music for The Ring but, having fallen in love with a married woman, Mathilde Wesendonck, he turned away from this task in 1857 to write the passionate love story Tristan and Isolde (illustrated), finally completed in 1859. Unfortunately for him, this opera was abandoned after some fifty rehearsals in Vienna, Mathilde decided to stay with her husband, and, because of this particular affair (just one among many), his wife left him.

xxxxxTo avoid the scandal, Wagner travelled to Venice, stayed for a while in Lucerne, and then visited Paris, where his revised version of Tannhauser proved a complete and famous flop. The gentlemen of the Jockey Club, the élite of French society, hissed their disapproval, and almost brought an end to the performance. In 1861 an amnesty finally allowed him to return to Germany, but by then he was almost penniless, obliged to live off others, and his works continued to find little favour. It seemed that his musical career was at an end, but this proved far from the case. As we shall see, his future compositions, notably his cycle of four operas, known as The Ring of Nibelung and produced in 1876 (Vb), was to make him the master of German opera and the champion of the Germanic peoples. Indeed, his music was destined to have a profound effect upon the development of music in the Western World.

xxxxxIncidentally, in 1855 Wagner visited London and directed the London Philharmonic concerts. He paid a second visit in 1877 and, after a successful series of concerts, travelled to Italy. ……

xxxxx…… Together with Mendelssohn’s Wedding March, the Bridal Chorus from Lohengrin is the most popular piece of music heard at weddings. Played as the bride enters the church, it is known t 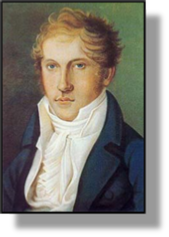 oday by its popular title: Here Comes the Bride.

xxxxxAnother musician who, like Franz Liszt, greatly admired Richard Wagner’s music, was the German composer and conductor Ludwig Spohr (1784-1859). He conducted his Flying Dutchman in 1843 and his Tannhauser some ten years later. A gifted violinist, earlier in his career he travelled widely on the continent, including a visit to Russia and a tour of Italy with the great violin virtuoso Niccolo Paganini. In 1804 he visited Berlin and played with the young German composer Giacomo Meyerbeer, then aged 13. 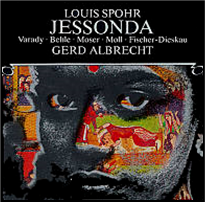 xxxxxFrom 1820 Spohr made six tours of England, during which he appeared before Queen Victoria and her husband, and his music gained wide popularity. In 1831 he produced his Violin School, a treatise on playing the violin. He composed more than 200 works including eleven operas, nine symphonies, fifteen violin concertos, and a wide variety of chamber music. Today he is best remembered for his 8th violin concerto and his opera Jessonda. A popular composer in his day, liked for his dulcet, romantic style, he was music director at the court of Kassel from 1822 to 1857, an appointment he acquired on the recommendation of the German composer Carl Maria von Weber. In some circles he gained a reputation akin to that of Ludwig van Beethoven, whom he met in Vienna in 1813.