xxxxxThe Venetian baroque composer Antonio Vivaldi (the “Red Priest”) is best known today for The Four Seasons, first performed in 1725. In his lifetime, however, apart from much religious music, he wrote 500 concertos, 23 symphonies, 75 sonatas and 40 operas. He was also an accomplished violinist, and conducted many of his own works. In particular, he made important improvements to the concerto. He introduced the three-movement format, and ensured that some catered for a variety of instruments. He had gained an international reputation by the 1720s, but in his later years his popularity declined, and his work was generally neglected after his death. The German composer Johann Sebastian Bach renewed interest in Vivaldi by arranging ten of his concertos for the keyboard, but it was not until the 1920s when some 27 volumes of his manuscripts were discovered that his music became more fully appreciated. 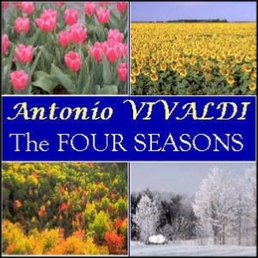 xxxxxThe Italian Baroque composer Antonio Vivaldi is best known today for his descriptive piece The Four Seasons, first performed in 1725 for violin and orchestra. However, during his working life he wrote no less than 500 concertos, 23 symphonies, 75 sonatas and over 40 operas, as well as much religious music. He was, himself, an accomplished violinist, and he conducted many of his own works.

xxxxxVivaldi was born in Venice and received musical instruction from his father, a violinist at St. Mark's Cathedral. He was ordained into the church in 1703, and it was at this time that, because of his red hair, he acquired the name ll Prete Rosso, the Red Priest. The following year he began teaching the violin at the Ospedale della Pietà, a conservatory for orphaned girls. He was director of music there for 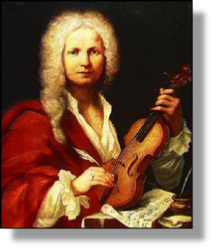 a number of years, and he stayed on the staff for the rest of his life, teaching his students, and composing oratorios and concertos for weekly concerts. He began to gain an international reputation from around 1713, when he started to compose operas, travelling to cities in Italy and elsewhere to direct their performances. By the 1720s he was sending out instrumental music to customers throughout Europe. But the popularity of his work did not survive his years. His music came to be regarded as old fashioned, and his career gradually went into decline. In 1740 he travelled to Vienna to attend the production of one of his many operas, but fell ill and died before the performance. Judging by the simplicity of his funeral it would seem that he fell on hard times towards the end of his life.

xxxxxIncluded in his sacred music are his lofty and joyous Gloria in D major of 1708, his oratorio Juditha Triumphans, composed in 1716, and a number of masses and motets. He achieved much success with such works, especially with his vocal music, but it was in the development of the concerto that Vivaldi made his greatest contribution, providing a model for musicians throughout Europe. He is generally attributed with introducing the three-movement format, and including cadenza 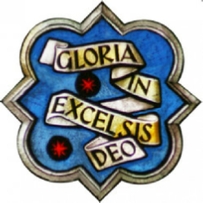 s (technical high spots) for individual soloists. A large number of his concertos are solo, mostly for the violin, but some cater for a variety of instruments, including the cello, viola d'amore, mandolin, oboe, flute, bassoon and brasses. The remainder are either concerti grossi (for two or more instruments), concerti ripieni for orchestra only, or chamber concerti for a group of instruments without an orchestra. In his works of three movements, the first and last are usually spirited and vigorous, whilst the middle piece is slow and lyrical in theme.

xxxxxAlthough he was a major figure in Baroque music, and one of the most influential musicians of his day, his work was generally neglected after his death, if not in the latter years of his life. However, the German composer Johann Sebastian Bach studied Vivaldi's work in his formative years and arranged ten of his concertos for the keyboard, and this served to keep alive some interest in his compositions. Then in the 1920s a very large collection of his musical manuscripts came to light - some 27 volumes in all -  and since then his music has steadily grown in popularity.

xxxxxIncidentally, although he was a priest, Vivaldi was not particularly pious. However, he frequently headed his compositions with the letters “LD” or “LDBMDA”. These were Latin abbreviations meaning Praise be to God and Praise be to God and the blessed Virgin Mary, Amen!

xxxxxAn important composer and musical theorist at this time was the Frenchman Jean Philippe Rameau (1683-1764). He spent much of his time in Paris where, apart from composing cantatas and a large number of harpsichord pieces, he produced 30 magnificent operas. These, though modelled on the style of the French composer Lully, gave greater scope to the orchestra and introduced adventurous harmonies. His masterpieces included Hippolyte et Aricie, Castor et Pollux and Zoroastre. He also composed two court entertainments in collaboration with Voltaire. Today his fame rests on his Treatise on Harmony, published in 1722. This comprehensive study laid the foundations of harmonic theory. In it he held that harmony had priority over melody and, towards the end of his life, this belief was the cause of a bitter controversy with the French philosopher Rousseau, a man who believed that rules and traditions in music and art generally stifled freedom of expression. 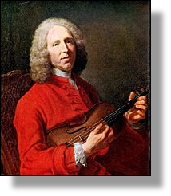 xxxxxAn important composer and influential musical theorist at this time was the Frenchman Jean Philippe Rameau (1683-1764). He was born in Dijon and early on was trained by his father, an organist who played in a number of local churches. He travelled to Italy at the age of 18, but only stayed in Milan for a few months before returning to France in 1701. He settled permanently in Paris in 1723, but before so doing was employed as an organist in a number of cities, including Avignon, Clermont, Dijon and Lyon.

xxxxxAs a composer he was particularly successful in his keyboard music and stage work, but he is particularly remembered today for his contribution as a music theorist. He wrote 12 treatises and many articles on this subject subsequent to writing his famous Treatise on Harmony, produced in 1722 whilst working in Clermont. This celebrated work systematically traced the harmonic practices of the past 100 years, and introduced a system of chord classification which proved the basis for future methods of harmony. And central to this 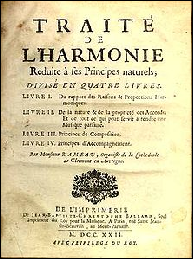 comprehensive theory was the overriding need for harmony to have priority over melody. In music, as in all art, he maintained, strict rules were necessary to impose order where chaos would otherwise reign.

xxxxxNot surprisingly, his impressive Treaty on Harmony brought Rameau back to Paris. Here he led an active life, composing for the harpsichord and becoming a fashionable teacher in music theory and keyboard technique. Inx1727, however, his fortunes improved even further when he gained the support of a wealthy financier named Le Riche de La Pouplinière (1693-1762). He became director of his benefactor’s private orchestra in 1731, and he and his family lodged in La Pouplinière’s town mansion for several years, and spent summers at his chateau at Passy, near Paris. Under his patronage Rameau was able to turn his talents to the making of some 30 operas, many of which became masterpieces of the French theatre. These were composed over a period of 25 years, beginning in 1733, and whilst his music conformed to that of his predecessors - notably the French opera composer Jean Baptiste Lully - he gave much greater scope to the orchestra, greatly increased the variety of dances, and, as one might expect, introduced more complex, adventurous harmonies to heighten dramatic effect. In the matter of orchestration he was one of the first composers to give individual instruments, such as the flute and oboe, their own passages.

xxxxxAmong his major compositions were his opera-ballets of the 1730s, Les Indes galantes and Les Fêtes d’Hebe, and his tragic operas of the same period, Hippolyte et Aricie - perhaps his finest work - Castor et Pollux and Dardanus. To the 1740s belong his Zoroastre, Pygmalion, the comic opera Platée - which includes most of the dance forms of the time - and two court entertainments in collaboration with Voltaire, La Princesse de Navarre and Le Temple de la Gloire. His musical compositions included six cantatas, a deal of chamber music, and three collections of harpsichord pieces, some of which gave the keyboard a much more independent role. 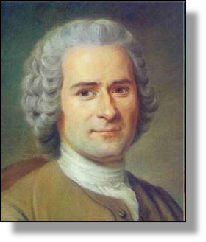 xxxxxIn the last years of his life his views on musical style involved him in a bitter controversy with his fellow countryman, the philosopher Jean Jacques Rousseau (illustrated), and, to a lesser extent, with certain compilers of the French Encyclopédie. Musically speaking, the young Rousseau had no professional training, and was very much a newcomer to music, but the disagreement was centred more around the role of music in society rather than musical form itself. Rousseau favoured Italian music because of its freedom of expression. Turning Rameau’s ideas upside down, he argued that melody had to have priority over harmony because harmony, with its strict adherence to a set of rules and traditions, stifled creativity. In many respects, it must be said, his argument won the day, borne out later by the works of the German Christoph Willibald Gluck and the Austrian Wolfgang Amadeus Mozart, composers who gave European music a new direction.

xxxxxFrom about the mid-1750s Rameau’s music began to lose its popularity, being regarded as too rich and complex for easy listening, but he was without doubt the greatest French composer of the 18th century - especially where operas are concerned - and, as a music theorist, he is rightly regarded as the founder of harmonic theory - the “God of Harmony” as one obituary put it.

xxxxxIncidentally, when Rameau was in Clermont in 1715 he signed a contract agreeing to be the cathedral organist for the next 29 years. In 1722 this proved something of an embarrassment when his Treatise on Harmony brought unexpected fame and a strong desire on his part to seek greater fortune in Paris. The authorities in Clermont were not prepared to release him, so he took matters into his own hands. A prickly individual, by all accounts, and one not to be thwarted, at an evening service in the cathedral he pulled out all the stops - the wrong stops! For the man who believed in harmony, the resulting discord had the desired effect. He was released from his contract and was able to take up a comfortable living in Paris!