xxxxxAs we have seen, following protests led by the Irish patriot Henry Grattan in 1780 (G3a), in 1782 the British government repealed much of Poynings’ Law, and made further concessions in 1793. However, in 1794 the ardent patriot Wolfe Tone (1763-1798), having formed the Societies of United Irishmen to gain further independence, turned to the French for help. They sent three expeditions to Ireland, but all failed. Government forces defeated the rebels at Vinegar Hill in 1798, and the revolt was crushed. Tone was captured but committed suicide. The rebellion led to the union of the Irish and British parliaments three years later in January 1801.

xxxxxAs we have seen, following the demand for a greater measure of Irish independence, made by the able politician Henry Grattan in 1780 (G3a), and given weight to by the Irish Volunteers - a 40,000 strong Protestant militia - the British government had felt it politic to make concessions. Faced with the American War of Independence, now in its fifth year, and concerned over its lack of military strength in Ireland, in 1782 it repealed the more demanding parts of Poynings’ Law - by which the English king and council had jurisdiction over the Irish Parliament - and passed the Catholic Relief Act, thereby removing much of its anti-Catholic legislation. In addition it eased some of the severe restrictions which had been placed upon Irish trade exports. 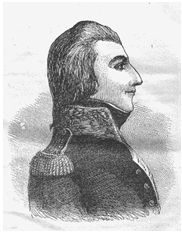 xxxxxHowever, catholic emancipation remained a burning issue, and, politically, the executive authority still remained in the hands of the British parliament. Many there were, including the ardent patriot Wolfe Tone (1763-1798), who felt that these concessions had not gone far enough. Encouraged by the outbreak of the French Revolution in 1789, he and others formed the Societies of United Irishmen in 1791, a string of radical political clubs made up of Roman Catholics and Protestants. These demanded catholic emancipation and further steps towards parliamentary reform.

xxxxxIn 1793, the British government, anxious to win over the loyalty of Roman Catholics, gave the franchise to the better-off sections of their community, widened the scope of their admission to public offices, and allowed them to have their own schools. On the other hand, fearing their political motives, and the growing strength of their movement, the British went all out to suppress the Societies of United Irishmen. Their action proved counter productive. The Societies, driven underground, now dedicated themselves to the total independence of their homeland and, fearing the consequences, turned to Revolutionary France for help in April 1794. Tone travelled to America and then France to seek support, and in December 1796 returned to Ireland aboard a fleet of 43 French ships carrying some 14,000 troops. Unfortunately for the Irish cause, a storm broke out as they reached Bantry Bay, and the expedition was forced to return to France. A further attempt to land troops in Ireland also failed in 1797. 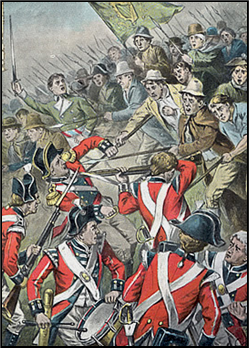 xxxxxStill confident that help would arrive, in May 1798 the United Irishmen rose up in revolt across eleven counties. Only in County Wexford in the south, however, did the rebellion pose a real threat. Here the rebels put up a particularly brave fight, and at one time looked like taking Dublin. Insufficiently armed, however, they were no match for the regular forces of the crown, and eventually their 20,000 strong army was soundly defeated at the Battle of Vinegar Hill, just outside Wexford. In the meantime a French force of some 1,000 men had managed to land in Killala Bay, but arrived too late to make a positive contribution. Following the Battle of Vinegar Hill (illustrated), the crown forces won a series of battles across the country. The rebellion crumbled and the organisation of United Irishmen was broken up, having lost about 30,000 of its members. Tone, its most colourful leader, was captured off Donegal in a French vessel which was making for the Irish coast. He was found guilty of treason, but determined not to be hanged as a common traitor, cut his own throat while awaiting execution.

xxxxxDuring his trail he defended his actions with the following statement:

From my earliest youth I have regarded the connection between Ireland

and Great Britain as the curse of the Irish nation; I felt convinced that,

whilst it lasted, this country could never be free or happy.

xxxxxIronically, the revolt he did so much to kindle in 1798, having failed, led directly to an even closer liaison between the two countries. As we shall see, British policy was to bring about the union of the Irish and British parliaments just three years later in January 1801.

xxxxxIncidentally, Rouse Hill near Sydney, Australia, was once called Vinegar Hill. It was here that convicts were captured during the Castle Hill Rising of 1804, and it was named Vinegar Hill as an allusion to the defeat of Irish rebels six years earlier.

Tone: by his daughter-in-law Catherine Tone, née Sampson, 1797. Vinegar Hill: a postcard created in 1898 to commemorate the centenary of the rebellion, artist unknown.