xxxxxFrançois Villon was the great lyrical poet of Medieval France. He had an eventful existence and came to be known for his impish humour, ironic turn of phrase, and his fear of sickness, old age and death. Attracted to the seamy side of life, he was often under banishment and, when not in prison, spent much time on the move. His two major works were his Le Petit Testament of 1456, in which he makes a list of amusing bequests to those he is leaving behind (hair clippings for his barber!), and Le Grand Testament, a soul-searching work about the life he has led. Despite a certain amount of bravado, it shows a great depth of feeling and a genuine compassion for suffering humanity, especially in the taverns and brothels of Paris. Towards the end of his life, awaiting execution, he wrote his Ballad for Hanged Men, in which he imagines his corpse rotting away! His sentence was later commuted to a ten-year banishment. His poetry was translated by the English poets Rossetti and Swinburne, and the American poet Ezra Pound. 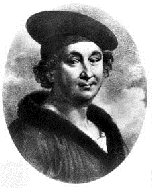 lyric poet of Medieval France, led an eventful life, some of it given over to debauchery and crime. He was born either François de Montcorbier or François des Loges. His parents were poor so he was brought up by a priest called Guillaume de Villon, and in gratitude to his patron he adopted his name. He studied at the Sorbonne and proved himself an able scholar, but he was not averse to taking part in the more boisterous side of student life. In 1455 he stabbed a priest to death during a street brawl and for this, plus a conviction for stealing money from a college chapel, he was banished from his native city.

aaaaaIt was as a result of this banishment from Paris that in 1456 he wrote his first major work, generally known as Le Petit Testament, but called by him Le Lais (The Legacy). In this he makes a list of bequests to those he is leaving behind. In this unusual format there are touches of impish humour, irony and defiance, and, at times, a certain undercurrent of spiritual unrest. For example, he leaves some wine he had stolen to a friend; some of his hair clippings to his barber; his spectacles and, with some significance, his sword to the clerk of criminal justice, and his soul to the Holy Trinity.

aaaaaFor the next four years he wandered about France and during this time he is known to have had at least two more spells in prison. He was clearly attracted to the seedier side of life. At the end of his wanderings he produced his longer work Le Grand Testament, which he simply called Le Testament. In this he reflects with candour on life in general and his vagabond existence in particular. He followed the same format as in his earlier work, but the tone is far less benign. In reviewing his own life, he pulls no punches about his own shortcomings and makes abundantly clear his fear of sickness, old age and death. There is much regret for his wasted past and a genuine compassion for 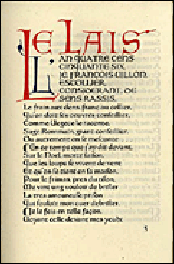 suffering humanity. The result is a down-to-earth, colourful account of his times, largely centred around the taverns and brothels of downtown Paris.

aaaaaBoth works are composed in eight-line stanzas with eight syllables to a line, and both show a meticulous regard for composition and form. Le Testament also contains some ballads and rondeaux, and these are in no way out of place. Despite a certain amount of bravado, there is a great depth of feeling and meaning in these poems, and a sincerity which creates a strong emotional appeal. Apart from some shorter poems, he composed a number of single ballads, including seven written in the slang of the day.

aaaaaIn 1462 we find him once more in prison, again for robbery, and then the following year, having taken part in yet another brawl, he was condemned to be "hanged and strangled". It was while he was awaiting execution that he wrote his plaintive I am François, They have Caught Me, and his moving A Ballad for Hanged Men, in which he describes his body slowly rotting away on the scaffold. In fact, it never came to that. He appealed against the sentence and it was commuted to banishment from Paris for ten years. He was released from jail and was never seen or heard of again.

aaaaaVillon's poetry was particularly popular from the late nineteenth century. It was translated by the English poets, Dante Gabriel Rossetti and Algernon Charles Swinburne, and by the American poet Ezra Pound, and appealed to its readers above all because of the emotional conflict it revealed. Here was a witty, talented man who lived life to the full, often on the seamy side, but one who had a great deal of compassion for the sufferings of others, a deep sense of guilt for his wasted years, and an abiding fear of death.

aaaaaIncidentally, the expression "But where 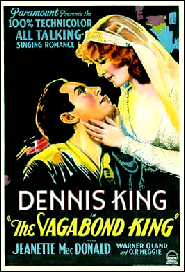 are the snows of yesterday", a morbid reflection on the relentless passage of time, is from his work Ballad of the Women of Yesteryear. ……

aaaaa…… In 1910 the French composer Claude Debussy composed three “ballades” based on texts from Villon. ……

aaaaa…… The romantic musical The Vagabond King, a big hit on Broadway in 1930, was based on Villon’s colourful life, coupled with the legendary tale that Louis XI of France, hoping to gain the support of the peasants in an oncoming battle, crowned a ne’er-do-well beggar “king for a day”.