xxxxxAs we have seen (1638 C1), under Murad IV the Ottoman Empire, already in decline, made something of a come-back, and this revival was continued later by a family of administrators known as the Koprulus. They seized Crete, forced the Austrians to give up Transylvania in 1663, and in 1672 seized land from Poland. Now convinced victory was theirs, the Grand Vizier Kara Mustafa Pasha laid siege to Vienna. But this proved a step too far. The Polish king, Jan III Sobieski, joined forces with the Emperor, Leopold III, and in 1683 their combined force launched a surprise attack on the Turks, gaining victory after a 15 hour battle. This Battle of Kahlenberg was a decisive turning point. As we shall see, over the next fifteen years a Holy League made up of Austria, Poland and Venice, and supported by Russia, advanced against the Turks, capturing much of their land in eastern Europe and defeating them at the Second Battle of Mohacs in 1687 (J2). 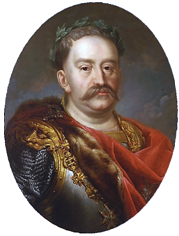 xxxxxAs we have seen (1638 C1), the Ottoman Empire, already in decline, made something of a come-back under its able leader Murad IV. His successor Ibrahim I was unstable, and his son, Mehmed IV, took part in military campaigns but proved totally useless as a ruler. During his reign, however, which lasted until 1687, there emerged a family of administrators known as the Koprulus. This "dynasty", their leader taking on the title of Vizier or Grand Vizier (Minister or Chief Minister), began to revive the Empire's fortunes. Ottoman forces gained victories over the Venetians - capturing Crete and consolidating their hold on the eastern Mediterranean - and then moved against eastern and central Europe. They attacked Austria in 1663, forcing the Austrians to give Transylvania over to a pro-Turkish leader, and then invaded Poland in 1672. Here they acquired even more land, despite their defeat at the Battle of Khotyn (now in the Ukraine) at the hands of the Polish commander-in-chief Jan III Sobieski (illustrated). 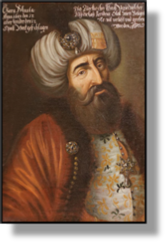 xxxxxInxthe late summer of 1683, convinced that the Ottoman army was sufficiently powerful - but without the support of his Sultan - the Grand Vizier Kara Mustafa Pasha (illustrated) advanced on Vienna with a large army and laid siege to the city. This grandiose scheme proved a step too far. Anticipating the threat, Jan III Sobieski - elected king after his victory at Khotyn in 1673 - had made an alliance with the Holy Roman Emperor, Leopold I, earlier that year. When the attack came, a combined Austrian-Polish army, some 80,000 strong, led by Sobieski and aided by the Austrian field marshal, Charles of Lorraine, moved close to the outskirts of Vienna. They took up their positions along the crest of the Vienna hills and launched an early morning attack on the Turks below. The Battle of Kahlenberg, as it came to be known, raged for 15 hours, but once the Turks had been driven out of their trenches, thousands were slaughtered or taken prisoner. 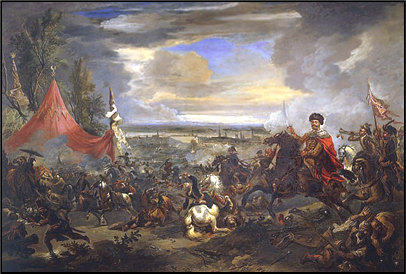 xxxxxThe Battle of Kahlenberg (or Vienna) proved to be one of the decisive battles of European history. With the invading Muslims stopped in their tracks, the way was now open for a counter offensive, led by the Holy League (Austria, Poland and Venice), and supported by Russia. As we shall see, large areas of the Ottoman Empire within eastern and central Europe were captured over the next fifteen years, and the Turks suffered yet another defeat at the Second Battle of Mohacs in 1687 (J2).

xxxxxIncidentally, for his failure to capture Vienna, Kara Mustafa Pasha paid the ultimate price. On the orders of the sultan, Mehmed IV, he was beheaded at Belgrade that same year, and his head was brought to the sultan on a silver platter!