xxxxxThe Dutch painter Jan Vermeer gained fame for his paintings of everyday scenes, noted for their fresh colours, subtle tones and soft light. Amongst his best work is The Lacemaker (1655), Maidservant Pouring Milk, Girl with the Pearl Earring, and his magnificent landscape View of Delft. He possibly used a camera obscura to help in the composition of his scenes, and in this respect he may well have known and been assisted by Antoni van Leeuwenhoek, a Dutch biologist who was interested in the use of lenses.

xxxxxJan Vermeer (sometimes known as Jan van der Meer) was a Dutch genre painter who was born in Delft and, apart from one short visit to The Hague, appears to have stayed there all his life. He served a six year apprentice, possibly under Carel Fabritius, a gifted pupil of Rembrandt, and, after being admitted to the town's Guild of Painters in 1653, became a prominent member. A painter of peaceful, everyday scenes, his work is outstanding for the balance and simplicity of his pictorial design, the purity and freshness of his colours, and the subtle rendering of tone, texture and light. Many of his paintings are noted for their precise, geometrical construction, and the soft play of daylight with which he i 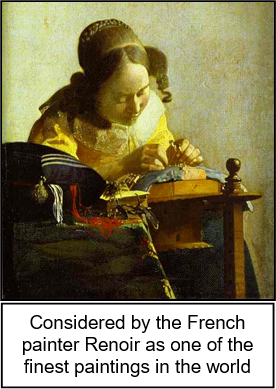 xxxxxHis early paintings clearly show an Italian influence, as in Diana and her Nymphs and Christ in the House of Mary and Martha, but he quickly turned to the quiet scenes of home life by which he is best known. His genre paintings, many unrivalled in their beauty, include The Lacemaker (illustrated) of 1655, and Maidservant Pouring Milk, and amongst his sunlit domestic interiors - which make up the bulk of his output - are The Pearl Necklace, Lady Standing at the Virginals (in the National Gallery, London) and the later work, The Love Letter. Other subjects covered in these simple but studied cameos of refined life are The Music Lesson, The Concert, The Guitar Player, and two scholars at work (painted as a pair), The Geographer and The Astronomer. Pictures that appear in the background of many of Vermeer's works often have some symbolic meaning appropriate to the subject matter, such as love, fidelity or harmony. 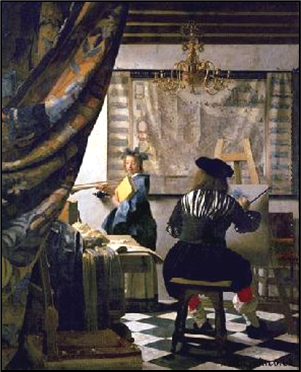 xxxxxOne of his masterpieces, The Artist's Studio, shows the back view of an artist - probably Vermeer himself - painting a portrait of Clio, the Muse of History (illustrated). The warm glow of light from the window and the heavy, richly-coloured tapestry draped across the left-hand side of the composition, add an extraordinary feeling of depth and space to the scene. Painted to adorn the new headquarters of the Guild of Painters (though it never did), it was stolen by Adolf Hitler during the Second World War and was eventually recovered from an Austrian salt mine in 1945, along with other missing paintings. Another masterpiece is his magnificent landscape View of Delft (illustrated below), completed in 1660 and, so we are told, painted from a window. Again, this work is remarkable for its detail (the clock stands at 7.10 a.m.), its creation of depth, and the realistic lighting and atmosphere he has captured at the beginning of an overcast day.

xxxxxIn this landscape, and in some of his other paintings, Vermeer, may well have used a camera obscura - an optical device that, with the aid of lenses, could project realistic images on a screen and thus help the artist in the general composition of his scene. This instrument, which was often used by o

ther artists of the day, was particularly useful in determining the enlargement of detail in the foreground of a painting. As he clearly made use of the camera obscura, it is possible that Vermeer was acquainted with Antoni van Leeuwenhoek, a Dutch biologist who was particularly interested in the application of lenses. After Vermeer's death, Leeuwenhoek was appointed trustee of his estate, so it seems likely that the two knew each other. 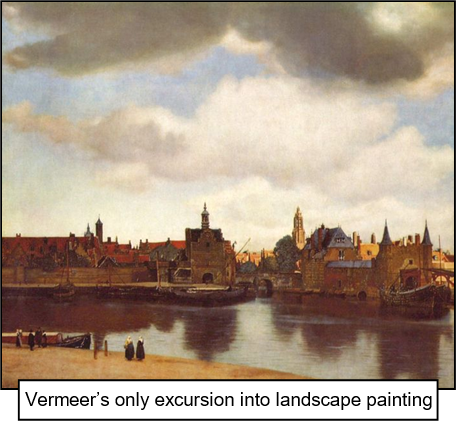 xxxxxLittle is known of Vermeer's life but it would seem that he died in poverty at the age of 43, and was buried in the Old Church at Delft. Soon afterwards his wife, Catharina, was declared bankrupt. Such hardship was doubtless due to the needs of a large family of eleven children. As an artist, he was a methodical, slow worker and many of the paintings he did produce were used to pay off household debts. He was an art dealer, like his father before him, but he only made a modest living. Today, only 35 authentic works remain, and his exceptional talent was not really appreciated until he was "rediscovered" in the latter half of the 19th century. Since then his reputation has grown considerably, and he is now regarded as second only to Rembrandt among Dutch artists of the 17th century.

xxxxxIllustrated below (left to right) are Maidservant Pouring Milk, Lady with her Maidservant holding a Letter, The Astronomer, and one of his most enchanting works, The Girl with the Pearl Earring.

xxxxxIncidentally, it is now known that the notorious Dutch forger Hans van Meegeren (1884-1947) painted a number of fake Vermeers, claiming them to be religious works painted before the Dutch artist began to specialise in secular subjects. These were accepted as genuine by the art critics of the day, so that, when, during the Second World War, he sold some to a number of prominent German Nazis - including Hermann Goring - he was arrested in 1945 and accused of selling Dutch national treasures! Deciding that being a forger was far less dangerous than being found guilty of collaborating with the enemy, he confessed to the forgeries and proved his "innocence" by painting yet another Vermeer forgery! He was sentenced to a year in prison, but died before starting his sentence. ……

xxxxx…… ThexDutch painter Carel Fabritius (1622-1654), under whom Vermeer might well have studied, was one of Rembrandt's most talented pupils, and would doubtless have gained greater fame had not his life been cut short by an explosion that occurred in Delft in 1654. A gunpowder store exploded, destroying part of the town. Fabritius was killed, and most of his paintings were lost, but Vermeer escaped unharmed. 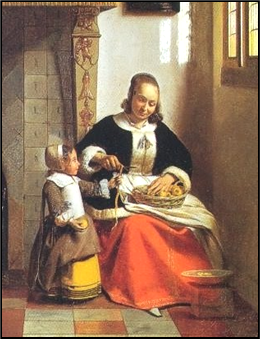 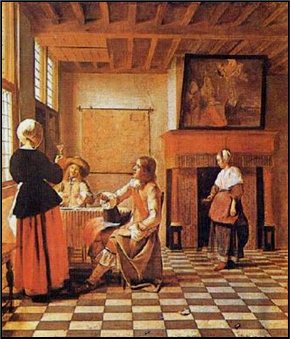 xxxxxA contemporary Dutch painter whose work showed a close affinity with that of Vermeer was the Rotterdam artist Pieter de Hooch (1629-c1684). He became well known for his garden and courtyard scenes but, during the years 1655 to 1663, while he was living in Delft, he joined the painters' guild and came under the influence of his friend Vermeer. Together they concentrated on simple, calm scenes of domestic life, depicting two or three people going about their daily work in a strictly composed, sunlit interior. Great attention is given to detail and clarity, the effects of light, and the creation of atmosphere and space. Typical of these orderly time capsules are The Pantry, A Mother Beside a Cradle, At the Linen Closet, and The Card Players. Illustrated here are Woman Peeling Apples and Interior Scene with People (now in the National Gallery, London).