START OF THE REVOLUTIONARY WARS -

xxxxxHaving declared war on Austria (and, as it happened, Prussia) in April 1792, the conflict in the Austrian Netherlands opened badly for the French, and by August a combined Austro-Prussian force was advancing into France. Convinced they had been betrayed by Louis and his Austrian Queen, the Paris mob marched on the Tuileries. The king’s Swiss Guard was massacred, but the royal family managed to escape and sought refuge in the Legislative Assembly. Louis was placed under arrest, and the radical George Danton emerged as the leader of the hour. He organised the defence of Paris, and as fear gripped the city, thousands of royalist suspects were rounded up and slaughtered in what came to be known as the September Massacres. Meanwhile on the battlefield the republican army, untrained but inspired by their revolutionary zeal, repulsed the allied army at the Battle of Valmy and then, by the Battle of Jemappes, overran the Austrian Netherlands. On September 21st, the king having been removed from office, a Republic was declared. As we shall see, the fate of the monarch was to be decided early in 1793.

and An Outline of the

xxxxxAs we have seen, the Declaration of Pillnitz by Austria and Prussia in August 1791, was seen as a threat to French sovereignty. The stage was set for conflict. Knowing that other monarchs were lurking in the wings - like those of Russia, Sweden and Spain - the Girondist party saw war as the only means of securing the revolution in France, and spreading its message throughout Europe. Likewise the monarchists now favoured a fight, but for a very different reason. They were confident that the revolutionary government would be defeated, and Louis XVI would then be restored to his former position of authority.

xxxxxOn the 20th April 1792 the French government declared war against the Habsburg monarchy - the start of ten years of Revolutionary Wars. By this time, however, Leopold II, the shrewd Archduke of Austria, had made an alliance with Prussia, so France now found itself facing two formidable foes. Despite the confidence of the Girondists, the first engagements were a disaster for the revolutionary cause. Having advanced into the Austrian Netherlands, the ill-disciplined French army virtually took flight at the first sign of resistance. The next step was predictable. In August a combined Austrian and Prussian force crossed into France and advanced on the capital. 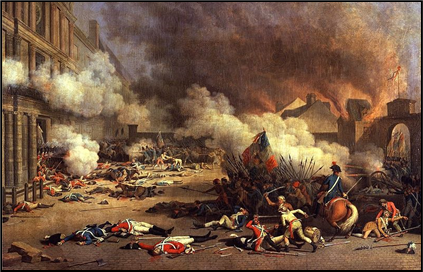 xxxxxThis turn of events caused widespread unrest in Paris. A wave of anger swept through the staunch republicans. Convinced that the king - and the queen - were in collusion with foreign despots, and angered by a threat from the allied commander, the Duke of Brunswick, that he would destroy Paris if the royal family were mistreated (The Brunswick Manifesto), they took direct action once again. On the 10th August they stormed the Tuileries Palace to overthrow their traitor king (illustrated). Louis, realising that only the Royal Guard, made up of Swiss mercenaries, could be depended upon, escaped with his family and, taking refuge in the Legislative Assembly, was promptly placed under arrest. Meanwhile, during the attack on the royal palace, most of the Swiss Guard were overwhelmed and brutally hacked to pieces.

xxxxxOut of the turmoil that followed, the Montagnards, emerged as the driving force, dominated by their dedicated leader Georges Danton. He swiftly gained control of the Legislative Assembly, and then took on the vital task of national defence, a pressing need as the allied armies moved ever closer to Paris. A man of action, under his leadership the city’s entire adult male population was summoned for military service, and all other citizens were employed in the manufacture of weapons. Then, as the crisis deepened, violence erupted in what came to be known as the September Massacres (or the “First Terror” of the French Revolution). In the opening week of that month, fearing that the monarchists might attempt to sabotage the war effort, thousands of suspects were rounded up and imprisoned. Then for four days armed bands, possibly approved or at least condoned by Danton, toured the prisons and massacred the inmates, killing some fifteen hundred in a bloodbath. 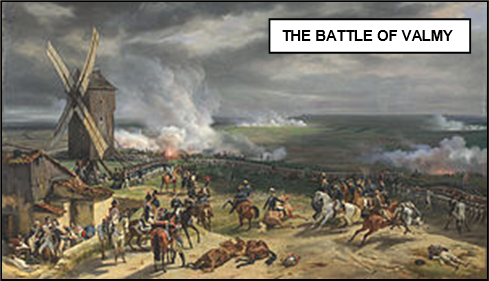 xxxxxMeanwhile, the new republican army that emerged to defend the French nation, led by General Dumouriez, was raw and untrained, but what it lacked in military prowess it more than made up for by its patriotic zeal. When on the 20th September 1792 it eventually confronted the invaders at Valmy in the Argonne forest, 35 miles south-west of Rheims, the Prussians and Austrians, under the command of the Duke of Brunswick, were stopped in their tracks and then forced to retreat. The Prussians actually opened the battle, but the French used their artillery to telling effect and then launched a counter attack, driving the enemy off the field and, eventually, out of France altogether. And the surprising victory at Valmy - a great boost for the republican cause - was not a flash-in-the-pan. ThexRepublican army then went on to capture Savoie and Nice later that month, Mainz and Frankfurt in October, and then, by their victory at the Battle of Jemappes early in November, the whole of the Austrian Netherlands. By their patriotic spirit the ragged revolutionary army had taken on two of the finest military powers in Europe and sent them packing. The German writer Johann Wolfgang Goethe, who was present at the Battle of Valmy, was right to see it as “the advent of a new era in human history”.

xxxxxMeanwhile in Paris, just the day after this outstanding victory, the country’s new governing body, the Convention, assembled for the first time. The king having been voted out of office, on the 21st September it took the momentous step of declaring the country a Republic. The monarchy had been toppled. But whilst the revolutionaries had reason for rejoicing, there was also cause for concern. A serious split occurred between its members. The conservative Girondists, horrified at the September massacres, demanded an inquiry into the event, and were ready to lay the blame on Danton and his party colleague Jean Paul Marat. Their party, however, the radical Montagnards, argued that the Convention’s major task was to decide the fate of the ex-king. As we shall see, they got their way, and the Convention came to its decision early in 1793, but the wide split within the revolutionaries remained, and this was to end in open conflict. 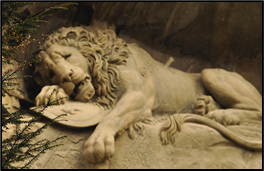 xxxxxIncidentally, it is thought that about 500 members of the Swiss Guard were killed when the insurgents stormed the Tuileries Palace in Paris in August 1792. Their heroism was commemorated in 1821 when the Danish sculptor Bertel Thorvaldsen (c1770-1844) was commissioned to produce a great sculptured lion outside one of the gates of Lucerne in Switzerland (known today as the “Lion of Lucerne”). From the 15th century onwards, Swiss mercenaries were highly regarded as soldiers, and were often employed as bodyguards. Perhaps best known are those that guard the Vatican in Rome, formed back in 1505 by Pope Julius II. ……

xxxxx…… Inxorder to make a complete break with the past and discard Christian festivals and saint days, a new French Republican Calendar was introduced on the 22nd September, the day after the republic was declared. That day became the 1st Vendemiaire in “Year One of the Republic”, and the twelve months were renamed, most of them according to weather conditions expected at that particular time. So one was called Brumaire, meaning “misty”, another Thermidor, meaning “hot”, and another Ventose, meaning “windy”. The idea, which also divided each month into decades instead of weeks, didn’t really catch on, perhaps not surprisingly. The calendar was discarded in 1805, and the Gregorian calendar reintroduced on the 1st January 1806.

xxxxxThe stirring marching song La Marseillaise was written and composed by an army captain named Claude Joseph Rouget de Lisle over the night of 24th April 1792. It became very popular, particularly among a contingent of volunteers from Marseille. When they arrived in Paris singing the song, it was named after their city, and soon became the revolution’s rallying cry. It was made the official national anthem of France in 1795, but it was not until 1879 that it was adopted on a permanent basis. 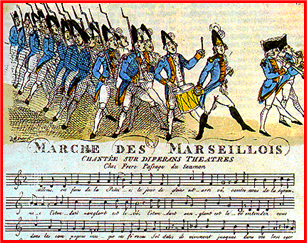 xxxxxLaxMarseillaise, the Revolution’s rousing hymn was actually composed in Strasbourg. In April 1792 the mayor of that city stressed the need for a marching song for the troops. Claude Joseph Rouget de Lisle (1760-1836), an army captain in the engineers, was quartered in Strasbourg at that time and, so we are told, wrote the words and composed the tune of his march over the night of 24th April, just a few days after war had been declared against Austria. Originally called Chant de Guerre pour L’armée du Rhin (War Song for the Army of the Rhine), it became very popular, particularly among a contingent of volunteers from Marseille. When they arrived in Paris singing the song it was immediately dubbed “La Marseillaise”, and it soon became the great rallying cry for the Revolution as a whole.

xxxxxThe Convention accepted it as the French national anthem on the 14th July 1795 but, because of its association with the revolution, it was later banned in the time of Napoleon, Louis XVIII and Napoleon III. It was not fully reinstated until 1879, and today, in general, only the first and sixth verses are sung on public occasions. Over the years it has been adapted by a number of composers. The Russian composer Pyotr Tchaikovsky included it in his 1812 Overture, composed in 1880. 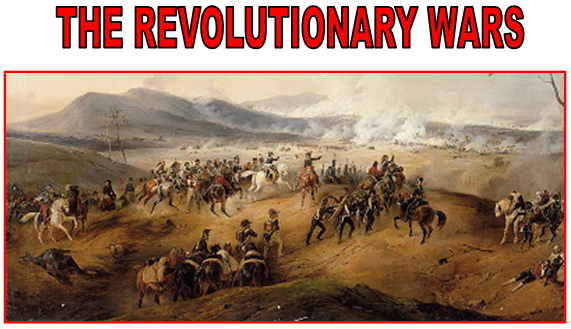