xxxxxIn 1869 the state of Tunisia, then part of the Ottoman Empire, was declared bankrupt. An international commission was set up, administered by France, Britain and Italy, to control the country’s economy. In the early 1870s Italy, with commercial and geographical advantage, laid claim to the territory, but France and Britain opposed this move. In 1878 they came to an agreement whereby the British would support French influence in Tunisia and the French would recognise the British occupation of Cyprus. Using border raids as an excuse, the French invaded Tunisia in May 1881, and had made the country a French protectorate by 1882. Italy protested at this action, but could not risk a showdown with France. Tunisia eventually gained its independence in 1956. 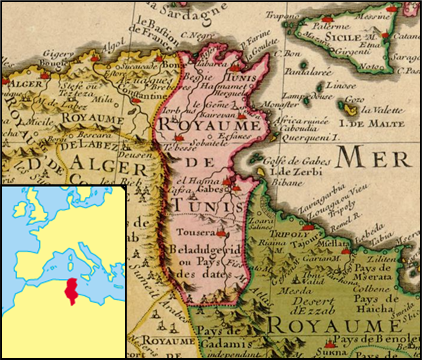 xxxxxIt was in 1869 that the state of Tunisia, then part of the Ottoman Empire, declared itself bankrupt. An international financial commission was set up, administered by France, Britain and Italy, to take control of the economy and reform the fiscal system. At that time, both geographically and commercially, Italy was in a favourable position to expand its influence in this piece of North African territory, but it had only recently been united (1861) and had more pressing concerns. Not surprisingly, there was little public support for such a venture. By the early 1870s, however, all that had changed. Italy had built up substantial investment in the country, and it provided by far the largest number of settlers. It now considered it had a rightful claim to ownership - the acquisition of a place in the African sun in keeping with other European states.

xxxxxFor their part, however, both France and Britain - established colonial powers - were anxious to keep Italy out, and they were prepared to make concessions in order to do so. In 1878, at a time when, via the “Dual Control”, they were working together to improve the financial standing of Egypt - another African country close to bankruptcy - they came to an understanding. Britain was to support French influence in Tunisia in exchange for French recognition of Britain’s occupation of Cyprus. Given this valuable assurance from the British, the French then prepared for a military take-over. The pretext for such an invasion came early in 1881 when Tunisian tribesmen carried out a series of border raids into neighbouring Algeria, a country which, as we have seen, became a French territory in 1830 (W4). In response the French foreign secretary Jules Ferry, a politician much in favour of colonial expansion, took immediate action. An army, over 35,000 strong, crossed into Tunisia and quickly reached Tunis, the capital. 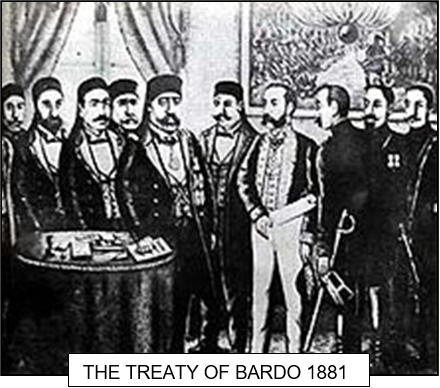 xxxxxFacedxxwith such overwhelming strength the Turkish Bey was compelled to come to terms. By the Treaty of Bardo in May 1881, a French protectorate was officially established, and the country was fully occupied by 1882. Responsibility for foreign affairs and defence was placed in French hands, and a large monetary loan to the Bey gave France control of the Tunisian economy, bringing an end to the International Financial Commission. In 1883 the Convention of La Marsa established a split judicial system, catering for Islamic law and the resident Europeans. Italy protested loudly against this take-over. It could not risk a showdown with its powerful neighbour, but it soured relations between the two countries.

xxxxxThe French made some notable improvements in the development of the country, but an independence movement began in the 1890s - mainly centred on the universities - and this grew in strength over the years. Two World Wars gave impetus to the movement, and full independence was finally gained in 1956.

xxxxxIncidentally, the 1880s saw risings against French rule in Algeria. As we have seen, the French took over the country in 1830 but it took some years before the whole of the territory was under their control. The Saharan region in particular was not pacified until the end of the century. …… 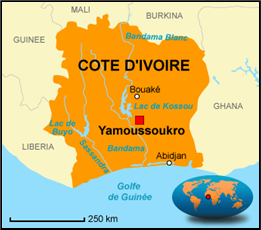 xxxxx…… Inx1893 the Ivory Coast became a French colony. France had shown an interest in West Africa during the 1840s, and established a number of fortified positions along the Gulf of Guinea to serve as centres for trading in coffee, cocoa and palm oil crops, as well as ivory. It took over protection of the area in 1842, and by the time it was made a colony there was a large number of French settlers. The country eventually gained its independence in 1960. ……

xxxxx…… As we shall see, the Berlin Conference was convened by the German Chancellor Otto von Bismarck in 1884 to decide on the over-all colonial partition of Africa.