xxxxxTunisia was overrun by Arabs in the 7th century, and the Ottoman Turks conquered the land in 1574. Then in 1705, when the Algerians invaded the country and captured its ruler, a Turkish officer named Husayn Ibn Ali (1669-1740) seized power, naming himself Bey or Governor. Five years later he was officially recognised, and he set up his own dynasty, a line of rulers which survived until 1957. Husayn Ibn Ali ruled until 1740, and conducted treaties with a number of major European states. As a Barbary State, the country prospered, mainly by offering protection from piracy, but with the decline of piracy in the 18th century a major source of income was lost. The country became a French protectorate in 1881. 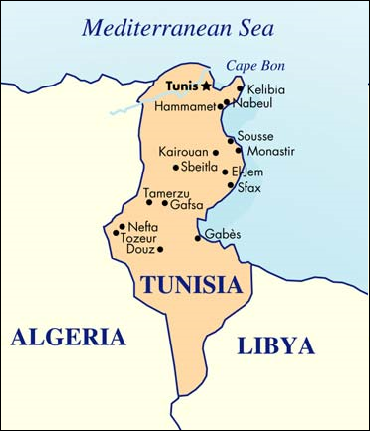 xxxxxThe area known as Tunisia was overrun by Arabs in the 7th century, and Arabic and Islam replaced Latin and Christianity. There were short periods of occupation by the Normans in the 12th century, and by the Spanish in the 16th, but it was not until 1574 that the Ottoman Turks conquered the land and became the long-term masters.

xxxxxDuring the imperial rule that followed, the government of the country was in the hands of native administrators known as Deys, but in 1705 after the Algerians had invaded and captured the ruler of Tunis, a Turkish officer named Husayn ibn Ali (1669-1740) (illustrated) seized control. He repulsed the Algerians with the aid of tribal warriors, and, proclaiming himself Bey, (from beylerbeyi, the Turkish word for governor) he virtually took over as an independent Ottoman ruler. Then five years later, having received official recognition from the Ottoman sultan, he issued a law of succession, and established the Husaynid dynasty, a line of rulers destined to survive until the abolition of the monarchy and the founding of the Republic of Tunisia in 1957 (arrowed on map below).

xxxxxHusayn ibn Ali himself ruled until 1740 and, such was his standing that he was able to conduct treaties with a series of European states, including France, Great Britain, Spain and Holland. The country was governed through law and religious scholars known as Malikites, and for many years it enjoyed a large measure of prosperity. As one of the Barbary states of North Africa, piracy remained a major source of state income until the beginning of the 19th century, with countries prepared to pay substantial sums to ensure that their shipping was not raided whilst sailing in the Mediterranean. However, by 1815 the American navy had virtually put an end to this piracy, and this plunged the country into debt. It went into economic decline, and became a French protectorate three years after the Treaty of Berlin in 1878.

xxxxxIn 1711, just six years after Husayn Ibn Ali had seized power in Tunisia, Ahmad Karamanli (1686-1745), the local governor of the adjoining province of Tripoli (part of present-day Libya), gained control and established his own dynasty. His rule was recognised, and the Karamanlis survived, in name at least, until 1835. Later, however, European powers sought to gain influence in the area, and in 1911 the Italians occupied and settled in part of the territory. 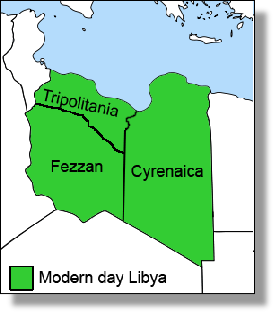 xxxxxJust six years after Husayn Ibn Ali seized power in Tunisia, the adjoining Ottoman province of Tripoli - comprising part of present-day Libya - also gained a large degree of autonomy, and in much the same way as had occurred in Tunisia. The Turks had conquered the province from the Knights of St. John of Malta in 1551, and established rule by native administration. In 1711, however, the local governor, Ahmad Karamanli (1686-1745) seized power, and established his own dynasty. His rule as an hereditary pasha was generally acknowledged, and the Karamanlis survived, in name at least, until 1835. During this period it continued to benefit from the trans-Saharan trade and, like Tunisia, grew rich on state organised piracy. Once Libya was opened to European commercial enterprise, however, it became embroiled in the rivalry between colonial powers. The British and French sought influence in order to gain supremacy in the Mediterranean, and in 1911 the Italians occupied part of the territory (Tripolitania), and began a programme of settlement.