xxxxxAs we have seen (1810 G3c and 1824 G4), by 1830 all the countries of Latin America had thrown off their colonial masters. However, within a short space of time all were in the hands of a military or civilian dictator bent on extending his country’s influence at the expense of his neighbours. A particularly ambitious leader in this respect was Francisco Solano Lopez (1826-70). Coming  to power in Paraguay in 1862, he was determined to gain his country access to the Atlantic seaboard at the expense of Brazil. With this in mind he built a large army and, overestimating its capabilities, invaded both Brazil and Argentina. In May 1865 these countries, together with Uruguay (also threatened with invasion) formed the Triple Alliance, set on destroying Paraguay’s military might. This they achieved in one of the fiercest and bloodiest wars ever fought in Latin America. The Paraguayans were quickly pushed out of Brazil and Argentina, but fought a long rearguard action around their stronghold of Huaita in the south. Eventually, however, the military campaigns, famine, and an outbreak of cholera drastically reduced the country’s population and, with the fall of Huaita in August 1868, Lopez was forced to retreat northwards. His shattered army was surrounded and completely destroyed at the Battle of Cerro Cora in May 1870, and Lopez was killed while trying to escape. He left his country in ruins and its people near to extermination. Occupied by Brazil until 1876, the nation took decades to recover, and did not appoint its first democratically-elected president until 1993.

xxxxxSpain emerged from the French Revolutionary Wars (1792-1802) a bankrupt and divided nation. Ferdinand VII was restored to his throne in March 1814, but was unable to keep his own domain in order, let alone his possessions overseas. Indeed, by 1830 all the countries of Latin America had successfully overthrown their Spanish masters and gained their independence. In the south, as we have seen, the rebellion against colonial rule began in Argentina in 1810 (G3c). This sparked off revolts in the neighbouring states of Paraguay and Chile, and by 1818 all three countries had gained control of their own destiny. In the north, due mainly to the work of the “Liberator” Simon Bolivar (1824 G4), New Granada was liberated in 1819, Venezuela in 1821, and Ecuador a year later. Finally Peru gained its independence in 1824, and the northern region (renamed Bolivia) in 1825. And to compete the picture, Brazil, a Portuguese colony, became an independent monarchy in 1822, and Uruguay - controlled by Brazil for a time - gained its independence six years later. 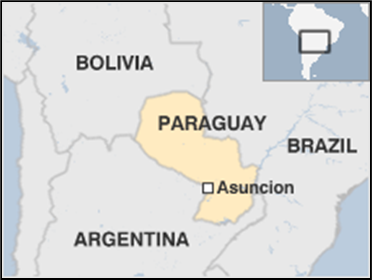 xxxxxBut as so often happens in such circumstances, independence from colonial rule did not bring freedom for the individual. Constitutional government found no place in the new independent states of Latin America. Nor did Bolivar’s grand idea of a union of all the former Spanish colonies find any favour, the bitter regional rivalries and the ambitions of its various leaders saw to that. Within a few days the political freedom that had been so painfully won in each of these countries was stifled under a military dictatorship, the power of the church, or the rule of few wealthy families. For the foreseeable future, confrontation not union was to be the stuff of South American politics. Very soon, boundary disputes led to a string of conflicts. Of these, none was more bloody or prolonged as the one that began in 1865 between Paraguay and its neighbours Argentina, Brazil and Uruguay - the so-called War of the Triple Alliance (but sometimes known as the Paraguayan War). 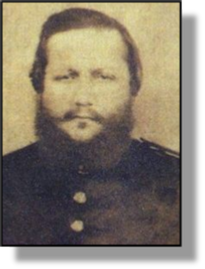 xxxxxAsxwe have seen, Paraguay gained its independence in 1811, but within a few years the new republic was in the hands of an absolute ruler named Jose Gaspar Rodriguez de Francia. His successor, the dictator Carlos Antonio Lopez, made some attempt to develop the state’s natural resources, but with the coming to power of his eldest son Francisco Solano Lopez (1826-1870) (illustrated) in 1862, the country was soon plunged into unmitigated disaster. An ambitious, arrogant megalomaniac, Lopez conceived the idea of a “Greater Paraguay” which, at the expense of Brazil, would provide access to the Atlantic coastline. With this in mind he quickly expanded and modernised his army - about 50,000 strong - and looked for a fight.

xxxxxHis opportunity came in 1864 when Brazil, aiming to extend its authority (if not its borders), intervened in a civil war then raging in Uruguay. Lopez ordered the Brazilians to withdraw their troops and, when they did not do so, invaded their western province of Mato Grosso, sacked the capital of Cuiaba, and took possession of the state’s diamond mines. And he then went a step further. Having decided to give military support to the Uruguayan president, he declared war on the Argentinians in April 1865 when they refused to give his army access to Uruguay via their province of Corrientes. Lopez promptly seized two Argentinian warships in the Bay of Corrientes, and the next day marched his army into the two provinces of Corrientes and Entre Rios. The response was inevitable and the result fairly predictable. In May 1865 the Triple Alliance was formed by Brazil, Argentina and the puppet government of Uruguay. Each pledged to wage all-out war against Paraguay until that country was totally stripped of “all arms and elements of war”. They kept their word and more besides. 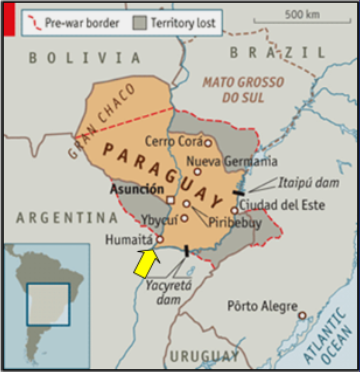 xxxxxThe conflict that followed was one of the fiercest and bloodiest ever fought in Latin America. In the opening phase of the conflict the Paraguayan navy was virtually destroyed by the Brazilian fleet at the Battle of Riachuelo - giving the allies control of the rivers of the River Plate Basin - and the Paraguayan army in Brazil was forced out of the city of Uruguaina after a six-week siege. Meanwhile in north-east Argentina, the Paraguayans were repulsed with heavy loses and their fleet badly damaged. In 1866 Lopez was forced to withdraw his forces within state boundaries, and for the most part the war then became centred around the stronghold of Humaita in the south (arrowed on map). Here again Lopez sustained heavy loses - some 20,000 men - when his army conducted a series of unsuccessful attacks at the Battle of Tuyuti. The Paraguayans did score victories, as in the Battle of Curupayty in September 1866, and the allies were forced on the defensive for well over a year, but by 1868 military campaigns, famine, and an epidemic of cholera had taken its toll on the army and the general population. In August 1868 Humaita was overrun after a long siege and Lopez was forced to retreat. 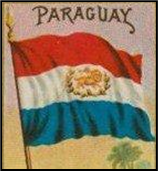 xxxxxPursued by a large allied force, he began to move the remnants of his army northwards. It was at this stage that he lost his reason. Convinced that there was a plot to kill him, he began a wave of indiscriminate terror. He murdered members of his family, including his mother and brothers, and executed hundreds of his people - judges, military commanders, politicians and civil servants. Such carnage only served to hasten defeat. Itxcame at the Battle of Cerro Cora in May 1870 on the northern frontier. Lopez’ shattered army was completely overwhelmed by some 4,000 Brazilian cavalry and he himself was killed while trying to escape. By all accounts his last words were, “I die for my homeland”, but the homeland for which he died was itself very close to extinction. Some 300,000 people had died out of a population of little more than 500,000, and the country lay in ruins. A total of 55,000 square miles were seized by Argentina and Brazil, and the Brazilians occupied the country until 1876  Then came the slow task of rebuilding the nation. It took more than a century. One of he first Latin American states to gain its independence, it was not until 1993 - 182 years later - that Paraguay chose its first democratically- elected president.