xxxxxAs we have seen, the Dutch settled on Table Bay, South Africa in 1652 (CW). Known as Boers or Afrikaners, they advanced inland and eventually came into conflict with their Bantu neighbours, the Xhosa. A war beginning in 1779 (G3a) was the first in a series of Kaffir or Cape Frontier Wars. The British arrived on the scene in 1795, and gained control of the colony by the Vienna Congress of 1814. Their liberal rule was disliked by the Boers, who were anxious to preserve their strict Calvinist way of life. Above all, they believed in the inequality of the races, and were therefore strongly opposed to the abolition of slavery, introduced by the British in 1834. Furthermore, they felt that the British gave them no support in their fight against the Xhosa, nor in their serious need for more pasture land. Their escape from British domination started with the Great Trek, a series of migrations which began in earnest in 1836 and continued for some six years. Over that time about 13,000 Dutch pioneers (Voortrekkers), together with a large number of ex-slaves and free blacks, crossed the Orange River and settled in southern Natal, near the sea, or further north in the high veld of the Limpopo River and Matabeleland. Those heading for Natal, having crossed the Drakensberg Mountains, were attacked by the Zulus. Their leaders were ambushed and murdered, some 500 of their number - about half - were killed, and most of their cattle were stolen. It appeared that all was lost, but, as we shall see, under their new leader Andries Pretorius, the Boers won a resounding victory over the Zulus at the Battle of Bloody River in 1838 (Va). 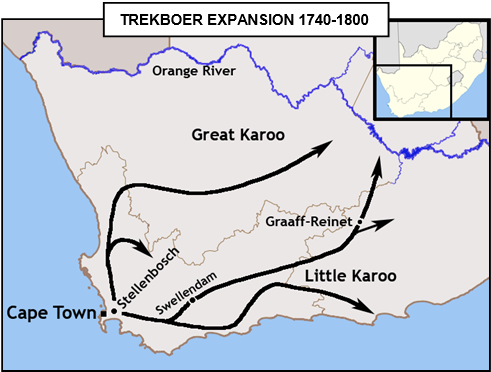 xxxxxIt was in 1652 (CW) that the Dutch settled on Table Bay in South Africa and established a permanent station there to assist their trading vessels travelling to and from the Far East. These Dutch pioneers were the first Afrikaners (or Boers) to settle in what is now known as Cape Province. They established farms in and around the area and then, over the years, advanced inland (illustrated). Here they came into close contact with their Bantu neighbours and, as we have seen, in 1779 (G3a) a war broke out with the Xhosa people, the first in a series of conflicts known as the Kaffir or Cape Frontier Wars. The British arrived on the scene in 1795, during the early stages of the French Revolution, and took control of the colony in order to prevent it falling into French hands. It was returned to the Dutch in 1803 by the terms of the Treaty of Amiens, but was again seized by the British in 1806, and was formally recognised as a British colony at the Vienna Congress of 1814.

xxxxxLarge-scale British settlement began around 1820 and, understandably, this alarmed the Dutch-descended population, especially when some 3,500 English-speaking settlers were allowed to take up land between the Boers and the Xhosa peoples. Done ostensibly to stop the fighting, it failed in its declared aim, and only served to tighten Britain’s control over the colony and deprive the Boers of much needed grazing land. As the growth of their herds outstripped the available pasture - which in itself

was becoming exhausted - the need for more land became a major priority.

xxxxxThis lack of good farming and hunting territory was one of the major reasons why the Afrikaners eventually decided to migrate northwards, but it was by no means the only one. A hardy, proud people, united by language, faith and work ethic, they were anxious to preserve their strict, Calvinist way of life. One facet of this was the genuine belief that there was a natural inequality between the white and coloured races, a concept enshrined in the constitutions of the states they eventually established. This belief had led to a revolt of the Boers in 1815 when their Hottentot servants and labourers had been given freedom under the law, and it became one of the decisive issues in 1834 when the British abolished slavery altogether. There was a growing fear among the Dutch descendants that the British did not understand the political and social realities of their new colony and, more to the point, were in no way concerned with the welfare of their Boer population - amply demonstrated in their view when in 1822 English was made the only official language. 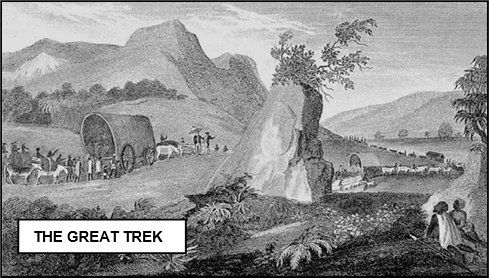 xxxxxThe final realisation that matters could only become worse came in 1836 when the government gave back to the African natives land which they had recently annexed on the eastern border of the colony. What had been a trickle of migration now turned into an organised flood. The shortage of suitable land, the liberal policy adopted by the British - which threatened to destroy the Boer’s traditional way of life - , and the prospect of a continuing border conflict with the Xhosa, were more than sufficient reasons to get the wagon wheels rolling. It was, as one described it, “the bursting of the dam”. Over the next six years or so it is estimated that some 13,000 Voortrekkers, accompanied by large numbers of ex-slaves and free blacks, moved north and north-east beyond the Orange River to make their escape. Eventually they were to set up their own domains in the future republics of Natal (1840), Transvaal (1848), and Orange Free State (1854), but there was to be much hardship and tribulation before this was accomplished.

xxxxxThe Great Trek was, in fact, a series of migrations conducted over a number of years, but some of the largest groups moved out in 1836. Having crossed the Orange River and defeated the Ndebele in 1837, some 5,000 gathered in the region of Thaba Nchu (in what would become the Orange Free 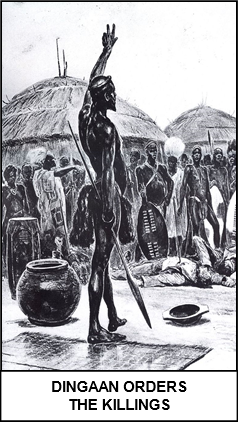 State). From here they split up, taking three major routes. The largest number turned eastward, making for southern Natal and an outlet to the sea, whilst others chose to make for the high veld, heading for the Limpopo River in the extreme north, or for Matabeleland in the north-west. (See map below).

xxxxxThose seeking to settle in good grazing land in Natal crossed the Drakensberg Mountains and reached their “promised land” in October 1837. It did not, however, prove a promising start. Here they were confronted by the Zulus, led by their king Dingaan. During negotiations with him, their delegates, led by their leader Piet Retief, were set upon and murdered (illustrated), and the tribesmen then attacked the Boer camp, killing some 500 - nearly half their number - and stealing most of their cattle. For these Voortrekkers all seemed lost, but, as we shall see, under their new leader Andries Pretorius, they routed the Zulus at the Battle of Blood River in December 1838 (Va), and went on to found their first, albeit short-lived, republic of Natalia.

xxxxxThe Great Trek began as a migration of a close knit Africaner community, and virtually ended with the birth pangs of a nation, though it was to be some time before that nation was born. Certainly in the eyes of the Afrikaners it is seen as the turning point in their history, and the start of their journey to nationhood.

xxxxxIncidentally, among those taking part in the Great Trek was Paul Kruger, the future South African statesman. Then a teenager, he moved with his family and eventually settled in the Transvaal, the republican state he was destined to lead as president from 1883 to 1900. During the trek he took part in the Battle of Vegkop, fought against the Ndebele in October 1836.

taken by the Great Trek 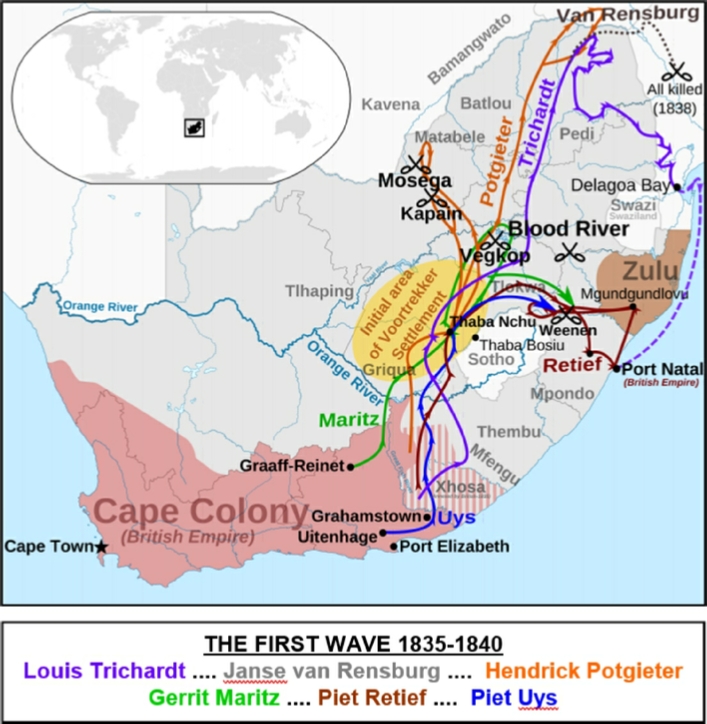