xxxxxAs we have seen, by 1214 King John had lost almost all of his lands in France. Henry made two attempts to regain these territories, but they ended in failure. By the Treaty of Paris in 1259 he acknowledged Louis IX as his overlord, and was left with only one possession in France, the Duchy of Guyenne. In exchange Louis withdrew his support for English rebels. As we shall see, it was the seizure of the Duchy of Guyenne by the French which was to lead to the outbreak of the Hundred Years’ War in 1339 (E3). 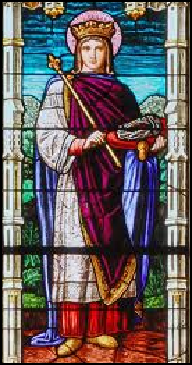 xxxxWe have seen how, by 1214, during the reign of King John, the French, led by their king, Philip II Augustus (the one who had gone on the crusade with Richard I), had recaptured Normandy, Anjou, Maine and Touraine from the English. 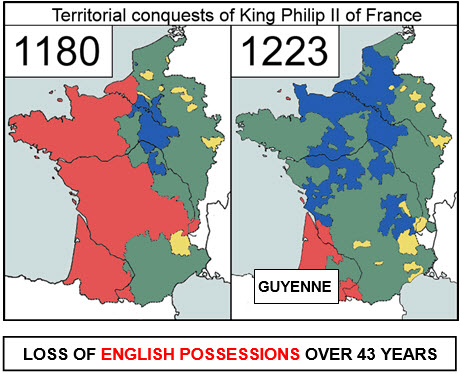 xxxxxIn an attempt to regain the crown's lost lands in France, Henry made two expeditions to France, in 1230 and 1242. Both ended in failure. Indeed, by the Treaty of Paris, signed in 1259 between Henry and the French king, Louis IX (illustrated), all that remained of England's possessions on the continent was the Duchy of Guyenne - an area made up of Gascony and part of Aquitaine in the region of Bordeaux. Henry renounced all other territorial claims and acknowledged Louis as his overlord. In exchange Louis agreed not to give support to any English rebels. The terms might appear harsh, but considering Henry's lack of success in France, it was a generous settlement on the part of the French king. He could well have stripped Henry of all his possessions, so weak was his support at home.

xxxxxAs we shall see, it was the confiscation of the Duchy of Guyenne by the French in 1337 that was to lead to the outbreak of the Hundred Years’ War in 1339 (E3).