xxxxxAs we have seen, the Cistercians, a Roman Catholic monastic order, was founded in 1098 (W2). Despite the good work of the Frenchman Bernard de Clairvaux, the order went into decline in the 13th century, and the lowering of standards led to break-away groups. In 1662 Armand de Rance, the abbot of Nôtre Dame de la Trappe in Normandy, re-imposed the harsh code of conduct in place when the movement was first formed, and the members of this revised order became known as Trappists. In 1902 the Trappists were united under the title The Reformed Cistercians. Nuns are known as Trappistines, and today there are some 60 Trappist monasteries in various parts of the world.

xxxxxAs we have seen, the Cistercians were members of a Roman Catholic monastic order founded by St. Robert de Champagne on Palm Sunday, 1098 (W2). In that year, he and a small number of monks left the Benedictine abbey at Molesme and founded a stricter, more austere form of Benedictine Order at a secluded area known as Citeaux, near Dijon in Burgundy. In 1113 the Frenchman Bernard de Clairvaux joined the order, and his firm convictions and example of saintly life did much to increase the number of recruits - by then known as white monks because of the colour of their habit. However, a period of decline set in after the 13th century, and the lowering of standards within the Cistercian order resulted in the creation of break-away groups. 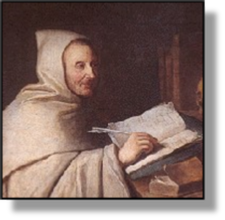 xxxxxThexmost notable of these reformed versions was established as from 1662 by Armand de Rance (illustrated), the abbot of the Cistercian abbey of Nôtre Dame de la Trappe, near Sees in Normandy. So harsh was the rule that he introduced that within a few years the members of the abbey were known as Trappists, and other communities were assuming their name and adopting their revised code of conduct. This code imposed the maintenance of absolute silence (save for chanting), a daily routine devoted to prayer, reading and manual labour, and the adoption of a vegetarian diet. 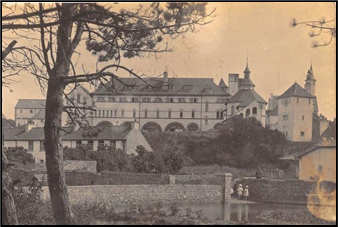 xxxxxIncidentally, in 1928 some Trappists from Belgium settled on the tiny island of Caldey, which lies just over two miles south of the port of Tenby in Carmarthen Bay in the Bristol Channel. They farm the land (little more than a square mile) and produce perfumes from herbs they grow there. The island - which boasts of a small village and a lighthouse - was earlier inhabited by Celtic monks, and it was the Anglican Benedictines who bought the island in 1906 and built the present monastery and abbey. Population in the 1980s was 48. ......

xxxxx...... Trappist monks are required “to live by the work of their hands”. They produce a variety of goods, including bread and a range of cheeses, and a number of monasteries have gained a worldwide reputation for the quality of their beer or liqueurs.