xxxxxHaving defeated the Zulus at the Battle of Blood River in 1838, the Boers trekked north and established two republics, the Transvaal and, later, the Orange Free State. In 1852, by the Sand River Convention, the British recognised the Boers’s claim to the Transvaal, then known as the South African Republic. However, in 1877, following border disputes between the Boers and the Zulus, the British took over the republic and named it the Crown Colony of Transvaal. But their rule was brief. As we shall see, after a few years, the Boers rose in revolt and defeated the British at the Battle of Majuba Hill in 1881 (Vc). 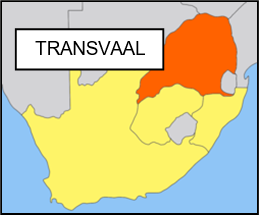 xxxxxAs we have seen, it was in 1838, following their victory over the Zulus at the Battle of Blood River, that the Boers crossed over the Drakensberg Mountains and, moving north, established two republics, the Transvaal and, later, the Orange Free State. In the Transvaal, originally called the South African Republic, progress in the setting up of an efficient administration was hampered by rivalry between the Boers themselves, not helped by an influx of their countrymen from Natal. However, the future of the republic seemed to be assured in 1852 when, by a settlement known as the Sand River Convention, the British, realising that the area was too far north to administer efficiently, recognised the independence of the Transvaal - the land beyond the Vaal River.

xxxxxInx1856 the territory was officially named the South African Republic, a constitution was drawn up, and Marthinus Pretorius (1819-1901), son of Andries Pretorius, was elected as its first president. Ten years later, however, diamond deposits were discovered, mainly along the Vaal River, and this, needless to say, renewed interest in the area. In 1877 (Vb) the British government, on the grounds that the republic was near to bankruptcy and was having difficulty in controlling its Zulu population, decided to annex the territory. Under the British it now became the Crown Colony of the Transvaal - but not for long. As we shall see, four years later the Boers rose up against their “masters” and regained their independence after defeating the British at the Battle of Majuba Hill in 1881 (Vc). 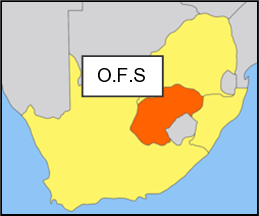 xxxxxThe Orange Free State was set up in 1842, but the local tribes called upon the British for help, and they took over the territory in 1848, naming it the Orange River Sovereignty. However, the British also found difficulty in subduing the local inhabitants, particularly the Sotho, and six years, later they decided to withdraw from the area. InxFebruary 1854, by the Bloemfontein Convention, the territory was handed over to the Boer settlers and they formed the independent Orange River Free State. The new republic continued to face opposition from the Sotho in the early years, particularly from their settlements in the east, but in 1869 they put an end to their resistance and took over part of their homeland. From then on the nation prospered, but the so called “Jameson Raid” of 1895 (Vc), an attack upon the Transvaal by British settlers, increased the growing tension between the British and the Boers and made open conflict a likely possibility. 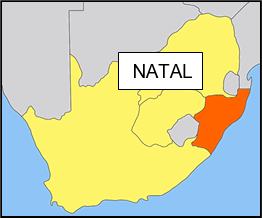 xxxxxMeanwhile the British, having taken over Natal by force in 1843, retained their hold on the territory for strategic reasons. They were not only anxious to prevent the Boers from gaining access to the sea - where they might become a trading rival - but they also feared that the Boers might drive out the native peoples and put pressure on the eastern area of the Cape Colony. Although administered locally, Natal was seen as part of Cape Colony until July 1856, when it was made a Crown Colony with its own elected assembly and legislative council. Over the next forty years or so the colony was extended at the expense of its neighbours. Its biggest acquisition came in 1879, when British forces defeated the Zulus at the Battle of Ulundi and seized control of Zululand.

xxxxxIncidentally, to make the colony pay its way, the British introduced the growing of sugar, a good export crop. The Africans, however, could not endure the hard labour required, and in 1860 it was necessary to import labour from India. It is estimated that over the next six years some 6,000 Indians, many of them women, arrived in the colony on five-year contracts. Quite a large number stayed on. ……

xxxxx…… The coast of Natal was sighted by the Portuguese navigator Vasco de Gama on Christmas Day 1497. He named the country Terra Natalis, Portuguese for “Christmas Land”. 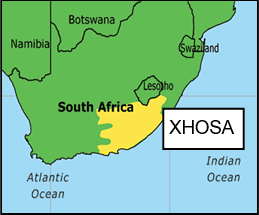 xxxxxAs we have seen, the Cape Frontier Wars began in 1779 (G3a) when the Dutch farmers of South Africa, (the Boers), moving inland, came into conflict with a group of tribes known as the Xhosa. Because of the natives’ superiority in numbers, the Boers’ advance was held up for some years. However, when they made their Great Trek northwards in 1836, they outflanked the Xhosa and left the British to continue the fight. This they were obliged to do in a series of encounters - sometimes known as the Kaffir Wars - and this intermittent conflict was not finally resolved until 1879, a full century later. However, the war that was waged at this time, from 1850 to 1853, - the eighth encounter in fact - is seen as the one which actually subdued this formidable enemy.

xxxxxIncidentally, in 1857, four years after their defeat, the Xhosa were persuaded by a prophecy to slaughter all their cattle and destroy all their crops in the belief that this would raise their ancestors from their graves and bring about the destruction of the British and other whites. This tragic event caused death and suffering on a large scale. It is estimated that some 35,000 Xhosa flooded into Cape Colony to escape the hardship, and an equal number died of starvation. This marked the end of the Xhosa as a serious threat to the British, though two sections of their people, the Ngika and Gcaleka, did take up arms in 1877 in an attempt to regain lost land. As we shall see, they were defeated by 1879 (Vb), and their territories were gradually taken over.