xxxxxWith the resumption of the war between Britain and France in 1803, Napoleon assembled a sizeable army at Boulogne. As a consequence, in 1805 Admiral Horatio Nelson was sent to the Mediterranean to blockade the port of Toulon, where a large French fleet was preparing to assist in an invasion of England. The French fleet managed to evade the blockade, and join a Spanish fleet at Cadiz, but when the combined force took to the high seas in October, the British caught up with it off Cape Trafalgar on the south-west coast of Spain. As was customary, the French commander, Admiral Villeneuve, drew up his 33 ships in single-line formation, but Nelson, having divided his 27 ships into two squadrons, sent each to attack the enemy at right angles. Both groups broke through the enemy’s line and, using close-quarter gunnery, caused enormous damage to the French and Spanish ships amid the confusion that followed. The British destroyed or captured 21 ships without loss to themselves. Nelson was killed during the engagement, but this crushing victory eliminated France as a major naval power, and established Great Britain as the world’s foremost sea power for close on a century.

THE BATTLE OF TRAFALGAR - October 1805

xxxxxThe Battle of Trafalgar, one of the most famous naval engagements in history, took place off the cape of that name in south-west Spain - near the western entrance to the Straits of Gibraltar. Here in October 1805 a British naval force, commanded by Admiral Horatio Nelson, virtually destroyed a combined French and Spanish fleet. This decisive victory not only removed any threat of a French invasion of England - still a future possibility - but also eliminated France as a major naval power, and made Great Britain the world’s foremost sea power for close on a century. 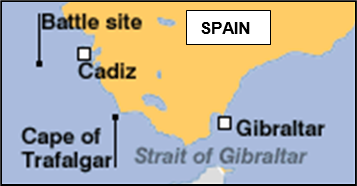 xxxxxNelson, following his successful command at the Battle of Copenhagen in 1801 (G3b), returned to England, where the Treaty of Amiens of 1802 had brought a short period of troubled peace. But he was not long out of action. When the war broke out again in May 1803, Napoleon assembled a sizeable army at Boulogne, and Nelson was sent to blockade the Mediterranean port of Toulon, where a large French fleet was preparing to assist in the invasion of England. Inx1805, however, under cover of bad weather, the French fleet, commanded by Admiral Pierre de Villeneuve, escaped from Toulon and made for the West Indies. Nelson gave chase, but Villeneuve evaded him and, turning back to Europe, sailed to Cadiz. where he was joined by a Spanish fleet. Again the British attempted a blockade, but this time, under direct orders from Napoleon to break out and land troops at Naples (to assist the French campaign there), Villeneuve slipped his combined force out of Cadiz on the 20th October, hoping to make it safely to the Mediterranean. On the following day, however, Nelson confronted him off Cape Trafalgar and battle was joined. 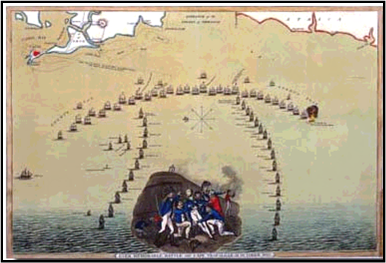 xxxxxThe Franco-Spanish fleet was slightly larger than that of the British. It numbered 33 ships mounting 2,640 guns as against 27 ships carrying 2,138 guns. Villeneuve formed his force into a single, loose line formation running south to north, whereas Nelson, having divided his fleet into two squadrons, sent each to attack the enemy at right angles (as shown here). This unorthodox and bold manoeuvre proved highly successful, allowing the British ships to use close-quarter gunnery and destroy the enemy piecemeal. The Franco-Spanish line was scattered and thrown into confusion. Nelson led the attack after sending out his famous message “England expects that every man will do his duty”. His flagship, The Victory, broke through the enemy’s lines and severely damaged the French flagship Bucentaure, but in the close quarter fighting that followed Nelson was wounded by a French sniper firing from the rigging of the Redoubtable. He was shot through the shoulder and chest and, carried below, died as the battle came to an end. In his final moments he was told of the victory and spoke his last words, ”Thank God, I have done my duty”. The painting below is by the American artist Benjamin West. 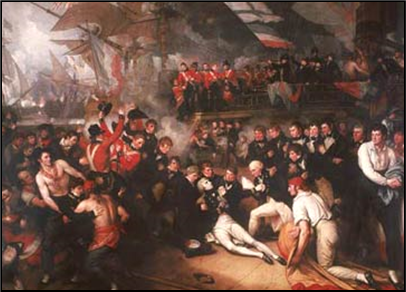 xxxxxThe engagement began about noon and was virtually all over in four hours. By that time the French and Spanish had lost 15 ships sunk, and of the 18 which escaped, two were lost at sea and four were captured early in November. By contrast, the British lost no ships, and their casualties, killed and wounded amounted to about 1,500 compared with some 6,000. In addition, Admiral Villeneuve was captured, along with thousands of his men.

xxxxxA great deal has been written about Nelson, his naval career and his personal life. Much of it has been hero worship, some of it has been critical. From the historical point of view, at least two points are worthy of mention. Firstly, his tactics as a naval commander, generally unorthodox and sometimes bordering on the foolhardy, won vital victories for his nation, and served to determine the course of its history. Secondly, despite the harsh and cruel aspects of naval life at this time, he instilled a sense of duty and a spirit of comradeship in all those under his command. He regarded his ship’s company, and, indeed, his whole fleet, as a “band of brothers”, united in the service of its country. This so-called “Nelson touch” instilled a sense of pride and superiority which continues to play a role in the British navy of today. 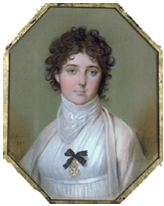 xxxxxIncidentally, Nelson’s body was returned to England, preserved in a barrel of brandy, and a nation in mourning gave its greatest naval commander and tactician a state funeral in St. Paul’s Cathedral. His flagship, The Victory, is preserved at Portsmouth docks in southern England. ……

xxxxx…… The portrait here of his mistress Emma Hamilton was Nelson’s favourite picture of her. He took “My Guardian Angel” with him on all his voyages, and asked for it when he lay dying. …… 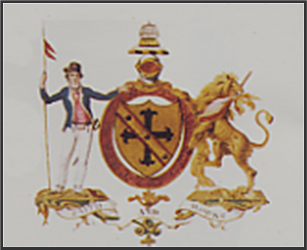 xxxxx…… A monument to Lord Nelson, “Nelson’s Column”, was completed in Trafalgar Square, London, in 1843. It is 170ft high and surmounted by a 18ft statue of the naval commander, the work of the sculptor Edward Hodges Baily (1788-1867). Later four bronze lions, designed by Sir Edwin Landseer, were placed at the corners of the column’s plinth and unveiled in 1867. ……

xxxxx…… One version of Nelson’s coat of arms shows a British sailor trampling on the Spanish flag (on the left) and the British lion tearing it apart (on the right). ……

xxxxx…… The bullet that killed Nelson is on display in Windsor Castle, and his uniform - the fatal bullet hole still visible - is to be seen at the Naval Maritime Museum in Greenwich. …… 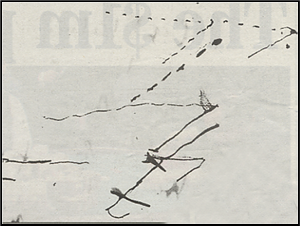 xxxxx…… In May 2002 Colin White, an historian working for the National Maritime Museum at Greenwich, came across a battle plan while looking through the museum’s archives. After careful inspection, it is now believed that these scrawled pen lines on a scrap of yellowing paper (illustrated) were made by Nelson himself, just before the Battle of Trafalgar. Certainly the lower part of the diagram shows two divisions of the British fleet advancing from the left and cutting through the enemy’s line at right angles. If the plan was drawn up by Nelson - and it compares favourably with earlier documents by his hand - then it is the only surviving sketch which shows not only the position of the two fleets at the start of the battle, but also Nelson’s proposed plan of attack. 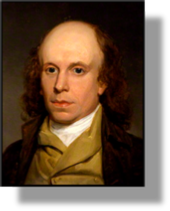 xxxxxNelson’s funeral monument in St. Paul’s Cathedral (illustrated below) was the work of the English sculptor John Flaxman (1755-1826). He began work on it in 1808 and it took ten years to complete. He likewise produced the monument to the painter Joshua Reynolds, also in St. Paul’s, and the one to the Scottish poet Robert Burns in Westminster Abbey. As a designer and illustrator, as well as a monumental sculptor, his distinctive work made him a leading exponent of the Neo-classical movement in England.

xxxxxFlaxman was born in York, and in 1770 began studying at the Royal Academy Schools in London, where he showed marked promise. As we have seen, early in his career he worked with Josiah Wedgwood (1760 G3a), and many of the fine antique designs which made Wedgwood pottery so famous were of his making. He it was who provided the vast variety of delicate relief figures and medallions, the majority of them based on Greek or Roman models.

xxxxxHe started working for Wedgwood in 1755, and in 1787 was appointed director of the company’s studio in Rome. He held this office until 1794 and, during this time made a close study of classical art, the works of the Italian sculptor Antonio Canova, and the writings of the German art historian Johann Winckelmann. To this period belongs the publication of his exquisite line drawings for the Iliad and Odyssey, Homer’s ancient epics, and several marble statues, including The Fury of Athamas from Ovid’s Metamorphoses. 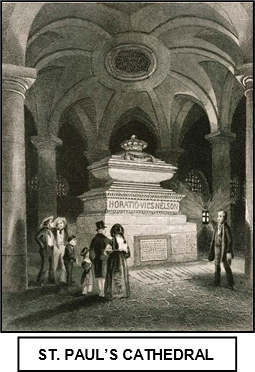 xxxxxOn his return to London in 1794 he continued his book illustrations, providing drawings for works by the ancient Greek dramatist Aeschylus, and for Dante’s Divine Comedy, but he also began to specialise as a monumental sculptor. His monument to the Earl of Mansfield in Westminster Abbey, completed in 1801, secured his reputation in this field. He became a full member of the Royal Academy in

1800, and was appointed its first professor of sculpture ten years later. During this period he received and fulfilled a large number of commissions. In addition to the Nelson monument and those for Joshua Reynolds and Robert Burns, for example, he sculpted monuments for Captain James Montague in Westminster Abbey and the figure of Apollo in Petworth House, Sussex (illustrated here).

xxxxxA life-long friend of the visionary poet William Blake, Flaxman was a man of exceptional artistic talent, be it as a designer, illustrator or sculptor. He was one of the few British artists of his day who gained an international reputation and, as a sculptor, he bears comparison with his two great contemporaries, the Italian Antonio Canova and the Dane Bertel Thorvaldsen. 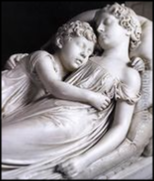 xxxxxIncidentally, another English sculptor at this time who deserves a mention is Francis Chantrey (1781-1841). Born at Jordanthorpe, now a suburb of Sheffield, he produced busts and statues of many of the prominent people of his day, including George III and George IV, Pitt the Younger, George Washington, the Scottish writer Sir Walter Scott, and the American artist Benjamin West. These works are noted for their classical simplicity and their capture of character. Worthy of note is his The Sleeping Children of 1807, a delightful marble sculpture in Lichfield Cathedral (detail illustrated). He was knighted in 1835.

xxxxxNelson’s funeral monument in St. Paul’s Cathedral was the work of the English sculptor John Flaxman (1755-1826). As we have seen, he started his career as a designer for the potter Josiah Wedgwood (1760 G3a). Responsible for the company’s exquisite classical designs, he spent some years as director of its studio in Rome. Here, and later in England, he showed his ability as a book illustrator, producing drawings for Dante’s Divine Comedy, and for works by Homer and Aeschylus. On his return to England in 1794, he took up sculpture in earnest and soon made a name for himself. Apart from Nelson’s monument, he also produced those for Joshua Reynolds and Robert Burns. A life-long friend of the poet William Blake, in his work as a designer, illustrator and sculptor he led the Neo-classical movement in England. He was one of the few British artists to be known internationally at that time, and, as a sculptor, he bears comparison with his contemporaries Antonio Canova and Bertel Thorvaldesen.