xxxxxThe talented English clockmaker Thomas Tompion was appointed clockmaker at the Royal Observatory, Greenwich, in 1676. He worked closely with the English inventor Robert Hooke, (assistant to the Irish scientist Robert Boyle), and it was by using one of his designs that he produced one of the first English watches to be regulated by a balance spring. He later developed the cylinder escapement, enabling the making of a flatter, more compact watch. He produced a number of barometers and sundials, and clocks that could run for a year without rewinding. His pioneering work was ably continued by his apprentice George Graham (1674-1751), who perfected the cylinder escapement, and invented the highly accurate dead-beat escapement. He also produced astronomical instruments, and introduced the “orrery”, a clockwork model demonstrating the motion of the planets around the Sun. 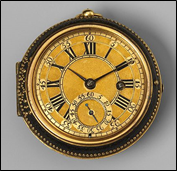 xxxxxThe English clockmaker Thomas Tompion (1639-1713) worked closely with the English inventor Richard Hooke, putting into practice the improvements he designed in watch and clock mechanism. He was born in Northill, Bedfordshire, and until the age of twenty five he is thought to have worked as a blacksmith. However, in 1664 he became an apprentice to a London clockmaker, and he soon showed an exceptional talent in this profession. He was admitted to the Clockmakers' Company in 1671 and in 1676 was appointed clockmaker at the Royal Observatory in Greenwich, opened in 1675 to aid navigation and timekeeping.

xxxxxIt was by using one of Hooke's designs that in 1675 he produced one of the first English watches to be regulated by a balance spring. He later developed the cylinder escapement that made possible the use of a horizontal wheel, thus enabling the making of a much flatter and more compact watch. He made a number of clocks that could run for a year without rewinding, and he also produced barometers and sundials. 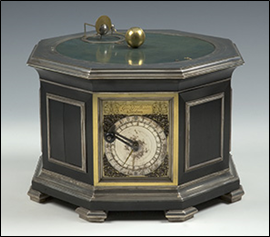 xxxxxThe high standard of his pioneering work was continued by his able apprentice, the Englishman George Graham, born in Cumberland in 1674. He went on to perfect the cylinder escapement and invent the dead-beat escapement, producing a degree of accuracy not surpassed for 170 years. He also produced astronomical instruments for the observatory at Greenwich - some when Edmund Halley was astronomer royal - and for the French Academy of Sciences. In addition, around 1704, he was responsible for the introduction of the "orrery", a clockwork model demonstrating the motion of the planets around the Sun. He had it made for Charles Boyle, Earl of Orrery, hence its name (one illustrated). The accuracy and quality of his time pieces and instruments earned him an international reputation. He died in 1751 and was buried in Westminster Abbey.

xxxxxIncidentally, in about 1730 “Honest George Graham” (as he was known in the trade) loaned the English clockmaker John Harrison £200 so that he could start work on his marine timepiece. As we shall see, Harrison designed the first practical marine chronometer in 1762 (G3a).