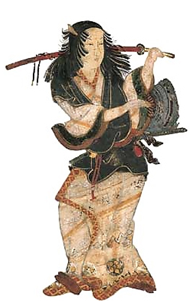 xxxxxIt was at this time that Kabuki, a composition of drama, music, song and dance, made its appearance in Japan. The letters that make up the word Kabuki (ka-bu-ki) actually mean "song, dance and skill". It was first introduced in Kyoto in about the year 1603 by a female entertainer named Izumo Okuni (illustrated), and it competed with the puppet theatre (Bunraku), then very much in vogue. This new art form had its origins in Noh plays and folk dancing and, because of its lavish costumes and spectacular settings, its livelier action, and its use of theatrical devices - such as trap-doors and revolving stages - it became very popular with the common people during the next two centuries. Later Kabuki was modernized and as such it enjoyed a marked revival in the 1980s. Performances were given overseas, and a number of European dramas, including Shakespeare's Macbeth, were produced in the Kabuki format 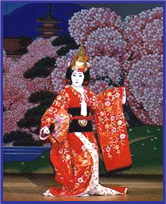 xxxxxIn the beginning, many of the dancers were women, but this was generally frowned upon, and from 1629 only men were permitted to take part. Productions were held in large theatres, often on extended stages, and, unlike Noh plays, the actors performed with painted faces (not masks), and the dance movements were less controlled and much faster in tempo. Plots were generally woven around traditional romances - often laced with an element of fantasy - or were centred around domestic comedy or tragedy. Later, however, historical events were dramatized and gangster plays were introduced.

xxxxxMaking its appearance in Japan at this time was a composition of drama, music, song and dance known as Kabuki. It had its origin in Noh plays and folk dancing, and its spectacular costumes and settings, and its lively action made it extremely popular among the common people. At first plots were woven around traditional romances or based on domestic comedy or tragedy, but later historical events were dramatised and gangster plays were introduced. From 1629 only men were allowed to take part.

xxxxxAnother important event of this period was the founding of the school of highly decorative painting known as Rimpa. Onexof the principal founders was the calligrapher and tea master Hon’ami Koetsu 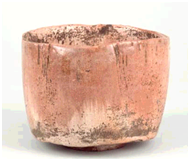 (1558-1637). He not only printed books of Noh Dramas, but he was also a brilliant designer of lacquer ware, and one of the outstanding potters of his day. As a tea master he is remembered for his raku tea bowls, considered to be the finest ever produced. The one illustrated here is in red-raku ware and named “Kaga”. Such was his talent that he was provided with an estate near Kyoto by shogun Ieyasu, and it was here that, under his direction, a small colony of artisans produced exquisite work in lacquer ware, decorated paper and ceramics. 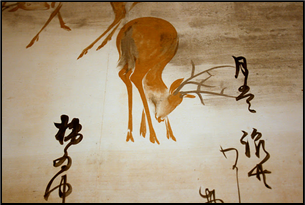 xxxxxHe is particularly remembered today for his part in reviving the traditional art of making poem scrolls. He produced these in collaboration with the brilliant painter Tawaraya Sotatsu, an artist famed for his screen paintings and fan pictures. Koetsu inscribed a classical poem on a scroll and Sotatsu richly decorated the paper with silver and gold designs of birds, flowers and deer. One of best examples of this combined craftsmanship is to be seen in the Deer Scroll, produced in the early years of the 17th century and now in the Seattle Arts Museum, Washington State, (detail shown here). Such superb workmanship in these fine arts was continued by a number of Japanese artisans, notably Ogata Kōrin (1658-1716) towards the end of the century.

xxxxxAnd it was artists of this time that contributed to the building of the Tosho-gu mausoleum. Completed at Nikko in 1619, and built in lasting memory of Ieyasu, the first Tokugawa shogun, its intricate relief work and rich, lavishly coloured decoration, provided a conspicuous, if somewhat gaudy tribute to a dynasty which was destined to survive until 1867.

xxxxxIt was at this time that the Rimpa School of painting was founded, famed for its highly decorative artwork. A principal founder was the brilliant calligrapher Hon’ami Koetsu. He gathered around him a small colony of artisans specialising in lacquer ware, decorated paper and ceramics. In collaboration with other artists, he also became famous for his richly decorated poem scrolls - such as the Deer Scroll - and, as a celebrated tea master, he is remembered for his exquisite raku tea bowls. And it was at this time, 1619, that artists contributed to the Tosho-gu mausoleum, built in memory of Ieyasu Tokugawa.

xxxxxAs we have seen, from the beginning of the Onin War in 1467 (E4), Japan was gripped by years of civil strife. It was not really until 1603, when Tokugawa Ieyasu, the founder of the Tokugawa shogunate, came to power that the country entered a long period of peace and stability. He eliminated any opposition and imposed a rigid feudal system. Everyone knew their place and owed allegiance to the shogun, whilst Buddhist sects were used to educate and control the masses. At first he was prepared to tolerate Christians and European traders, but in 1612 he began the persecution of both, and this policy was continued by his successors. By 1650 all Christians had been killed or expelled, and only a few Dutch and Chinese traders were allowed to remain in Nagasaki. This isolationism developed a fiercely nationalistic and inward-looking culture during a highly organised military-bureaucratic shogunate which survived until 1867. By then, however, as we shall see (1854 Va), some ports had been forced open. 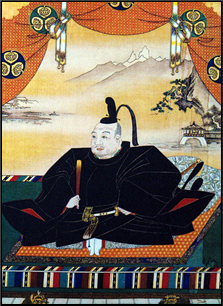 xxxxxAs we have seen, the Onin War which began in 1467 (E4), a violent conflict of eleven years, proved but the prelude to the "Epoch of the Warring Country", a century of fighting throughout Japan in which local feudal lords (or daimyo) battled with each other to gain control of their self-appointed domains. Eventually in 1568 one of these lords, Nobunaga, managed to capture Kyoto and begin the unification of the country. By 1582, the year of his death, most of central Japan was under his rule. Then his leading general, Toyotomi Hideyoshi (c1536-1598), succeeded him and virtually extended his military command over the entire country. But, it was not until 1603, with the coming to power of Ieyasu, the founder of the powerful Tokugawa shogunate, that Japan entered into a long period of peace, political stability, economic expansion and, be it noted, isolationism.

xxxxxFollowingxthe death of Hideyoshi in 1598, Ieyasu emerged as the most powerful military leader in Japan, having fought and schemed his way to prominence during the feudal wars of the past 40 years. Inx1600 he promptly defeated his rivals at the Battle of Sekigahara, and three years later in 1603, the Emperor (a leader in name only), appointed him shogun, the country's military governor. He immediately set about ensuring the long-term survival of his family's fortunes. Having handed his high office over to his son, Hidetada, in 1605, - thus establishing the hereditary principle - he set about taming or eliminating any would-be opposition.

xxxxxHis first step was to impose a rigid feudal system, already introduced in part by Hideyoshi, and to add some unique features. Divisions were made on defined social lines, as one would expect, but the 300 or so feudal lords - whose loyalty was always suspect - were obliged to provide service to the Shogun on a regular basis, and their families were regarded as hostages to their loyal behaviour. And the distribution of land was also strictly regulated, ensuring that good productive land, mining areas, defensive positions, and large commercial centres always remained in the hands of family members. In additio 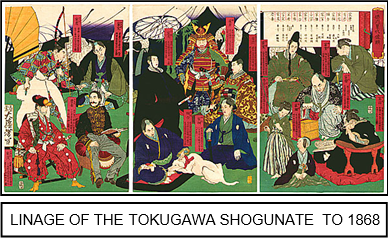 n, the Emperor and his court owed direct allegiance to the shogun, and the various Buddhist sects were used to educate and control the masses. This highly organized military-bureaucratic system was centred on the castle-city of Edo (modern Tokyo). Finally, in 1615, Ieyasu took up the sword and eliminated the one remaining threat to his regime, Hideyoshi's young heir, Hideyori. Thus when Ieyasu died the following year, the Tokugawa shogunate was firmly entrenched, and destined to remain in power until 1868.

xxxxxOn first coming to power, Ieyasu welcomed European traders and tolerated Christian missionaries, and, save for one or two drastic exceptions, this had been the attitude of past rulers. However, by 1612 he had become convinced that the introduction of Christianity was a prelude to foreign conquest. Thexpersecution of the Christians - numbering some 300,000 converts - now began and continued over many years. Massacres were frequent, particularly during the Shimabara Rebellion of 1637 and 1638, and by 1650 all known Christians had been expelled or killed. Those who managed to escape detection went into hiding and formed a movement known as the Kakure Kirishitan (Hidden Christians).

xxxxxMeanwhile, from 1624 overseas traders were forbidden to land on Japanese soil, and within a few years the only point of contact with the outside world was with a small number of Chinese and Dutch traders permitted to stay at the port of Nagasaki. Even here, the Dutch were restricted to Deshima Island in the bay, and their activities were constantly being limited. This self-imposed exclusion from the Western world resulted in the growth of a strong feeling of nationalism among the Japanese people, and the creation of a distinct, inward-looking culture. This period of isolationism was somewhat relaxed in and after 1720, but, as we shall see (1854 Va), no official trade was re-opened until the sending of a

n American naval mission in the middle of the 19th century.

xxxxxIncidentally, William Adams (1564-1620), an English sailor and shipbuilder, was the only foreigner ever to be made a samurai. He journeyed to Japan at the beginning of the 17th century and, as a trusted advisor to the first Tokugawa shogun, Ieyasu, directed the building of two western-style warships, the first of their kind to be seen in the Far East. Given the title Anjin-sama (the “esteemed pilot”), he is seen today as the symbolic founder of the Japanese navy.