xxxxxTippu Sahib became Sultan of Mysore when his father Hyder Ali died in 1782, and he it was who came to terms with the British at the Treaty of Mangalore in 1784, thus ending the second of the Anglo-Mysore Wars. He was a good administrator and a ferocious fighter - nicknamed the “Tiger of Mysore” - but he lacked his father’s judgement. In the third war, caused by his alleged attack upon the Raja of Travancore, he battled for two years against heavy odds, but in 1792 was forced to submit, paying a large indemnity and losing half his domains. Then in 1799 the British, using as an excuse his close friendship with the French, stormed his capital Seringapatam. After a siege lasting three months, the city was entered and Tippu was killed in the hand-to-hand fighting that followed. 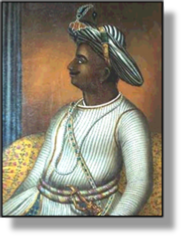 xxxxxAs we have seen, the second of the Anglo-Mysore Wars began in 1780 when Hyder Ali, supported by the Nizam of Hyderabad and the Marathas, attacked the British at Madras and overran the Carnatic, a strip of territory along the east coast of India. Only the quick action of the then governor-general, Warren Hastings, put an end to the threat. He sent reinforcements to Madras and, at the same time, created divisions in the ranks of his enemies. This enabled him to defeat Hyder Ali at the Battle of Porto Novo in 1781 and force a settlement. By this time Hyder Ali was dead, and the Treaty of Mangalore, restoring the status quo, was made with his son, Tippu Sahib (illustrated), in 1784.

xxxxxBut this brought a pause, not an end, to the conflict between the British and the state of Mysore in southern India. Tippu Sahib was an ambitious, energetic leader. In home affairs, he proved an able administrator, making improvements in agriculture, and opening up diplomatic and commercial relations with countries in the Middle East. As a soldier, too, he had more than proved himself during his battles against the Marathas, and by his defeat of the British on the banks of the River Coleroon in February 1782. Indeed, his fighting ability, not to mention his reputation for cruelty, had earned him the title “Tiger of Mysore”. But whilst he had his father’s aggression, he lacked his judgement, and this was to prove his downfall. 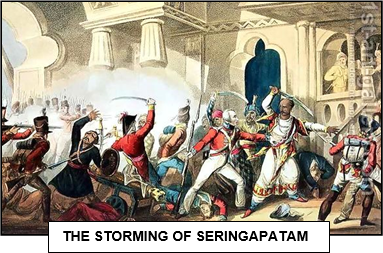 xxxxxThe inevitable third conflict broke out in 1790, when the British under Lord Cornwallis, claiming that Tippu had attacked their ally, the Raja of Travancore, and clearly anxious, in any case, to tame the tiger, went on the offensive. This time it was they who had the support of both the Marathas and the Nizam of Hyderabad. In a campaign lasting over two years, during which Tippu lived up to his nickname, Bangalore and Seringapatam were eventually overrun, and Tippu had no alternative but to concede defeat. He was forced to pay a large indemnity, and to give up half his domains. 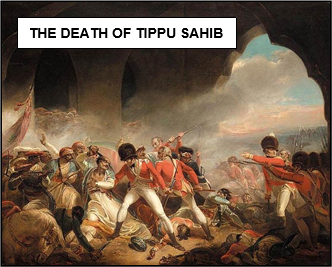 xxxxxIt was a bitter pill for Tippu to swallow, but worse was to come. Later, the British were informed that Tippu had made overtures to the French, entertained envoys from the republican government, and even planted a tree of liberty at his capital Seringapatam! At that time the Revolutionary Wars in Europe were at their height. It only needed the slightest suspicion of French involvement in the affairs of India to provide an excuse for action against an enemy which, in any case, was hostile and needed to be curbed. The governor-general Lord Mornington (later Baron Wellesley and elder brother of the future Duke of Wellington) secured the Nizam of Hyderabad as an ally, and then moved quickly to the attack, storming Seringapatam in the May of 1799. The siege lasted three months and then, as the capital fell (illustrated), Tippu was killed in the hand-to-hand fighting. In an attempt to avoid any charge of imperialism, Mornington then placed half the Mysore state in the hands of the Hindu reigning family, and divided the other half between the Nizam of Hyderabad and the East India Company. In reality, however, the British had gained control of the whole of Mysore. (SEE MAP BELOW.)

xxxxxIncidentally, it was Hyder Ali and his son Tippu Sahib who revived the use of rockets in battle. As early as 1232 there had been talk of “arrows of flying fire” and “heaven-shaking thunder”, used by the Chinese when the Mongols laid siege to the city of K’ai-feng in Honan province. This might well have been caused by a form of gunpowder. And later the Arabs are thought to have used rockets in Spain in 1249 and 1288, and the Paduans and Venetians in 1379 and 1380 respectively. By then alchemists had certainly discovered what they called “black 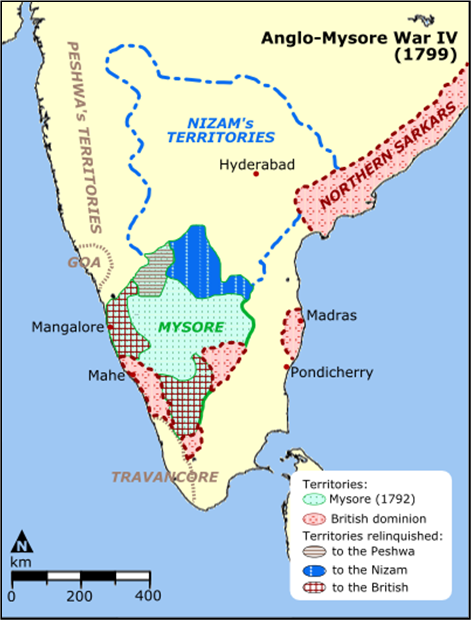 powder”, an inferior form of gunpowder. As late as 1668 a German officer designed a rocket made of wood and weighing 132 pounds. The gunpowder charge added a further 16 pounds, but its effectiveness as a weapon is not recorded.

xxxxxHyder Ali’s rocket was the first to use a metal cylinder, creating a much higher internal pressure and thus a greater thrust. They were tied to long bamboo sticks and had a range of over a kilometre. They were totally indiscriminate, but nonetheless proved an effective terror weapon, particularly against cavalry. Tippu made improvements to the weapon, and they were used extensively and to good effect in the battles for Seringapatam in 1792 and 1799. The success of these rockets encouraged further development in Europe. As we shall see, in 1805 an English artillery officer named William Congreve, basing his experiments on the rockets used by Tippu Sahib, produced a rocket over three feet long, and this weapon, used en masse, proved highly successful in the Napoleonic wars, especially in the bombardment of Copenhagen in 1807.