xxxxxThere was no love lost between the sons of William the Conqueror. As we have seen, with the untimely death of William in 1100, Henry wasted no time in seizing the English throne. By then, however, Robert of Normandy had returned from the First Crusade and was quick to dispute Henry's claim. Anxious to secure his crown, Henry invaded Normandy and in 1106 met up with his brother's army at Tinchebrai. In the battle that ensued the Normans were routed and Robert was captured. His son, William Clito, then took to the field, but Henry triumphed again, this time at the Battle of Brémule. His throne was now secure, and he had taken Normandy into the bargain! He returned to govern his land while his brother, Robert, saw out his days in Cardiff Castle. 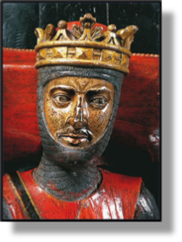 xxxxxThere was precious little brotherly love lost between the sons of William the Conqueror, Robert, William and Henry. At their father's death in 1087 a bitter dispute - that is too weak a description! - broke out between all three. Robert (illustrated), had been left the Duchy of Normandy and William the English throne, but neither were happy with the settlement. Indeed, William spent much of the first ten years of his reign in Normandy trying to seize the land inherited by his brother. He virtually achieved his aim when Robert decided to join the First Crusade, but William's sudden, untimely, and "accidental" death in 1100 put an end to all his plans.

xxxxxIt was then that Henry grabbed his chance. He had inherited money but no land. In 1100 he put that matter right by quickly laying his hands on the vacant English throne. He was crowned king three days after his brother's "accident". Robert, having returned from the crusade, disputed Henry's claim but his invasion of England in 1101 proved unsuccessful. Henry, anxious 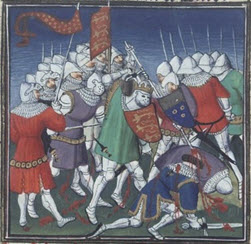 to secure his throne for good, then invaded Normandy and in 1106 met up with his brother's army at a place called Tinchebrai (now Tinchbray), about 30 miles south-west of Caen. Aware of the fighting ability of the Norman cavalry, Henry had his knights dismount and line up in close formation. By this tactic he beat off the cavalry attack and then, moving forward, routed the French foot soldiers (illustrated). Robert - known as Robert Curthose because of his small stature - was captured during the battle and was brought to England. He was taken to Cardiff Castle where in comparative comfort - so some would have it - he remained in captivity for the rest of his life. 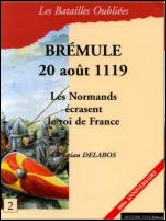 xxxxxBut Normandy was not yet won. Robert's son, William Clito, now took to the field, with the support, among others, of Louis VI of France. Thexdecisive battle was at Brémule in 1119 when Henry's forces defeated Clito and his allies. Henry's victories at Tinchebrai and Brémule meant that once again - as in the days of his father - Normandy was annexed to the English throne. Thus England was thrust once more into the heart of European politics and, be it for good or evil, was to be involved in the defence of its continental lands for the next 450 years. It was not until 1558, in the reign of the Tudor Queen Mary I, that the last English possession in France was lost.

Robert Curthose: illustrated from the effigy on his tomb in Gloucester Cathedral. Henry I: detail of a Jersey postage stamp, issued in 1987 to mark the 900th anniversary of the death of William I. Battle of Tinchebrai: illustration by the French painter and miniaturist Rohan Master (active 1410-1440) – Department of Manuscripts, National Library of France, Paris