xxxxxTamerlane (or Timur), a Turkoman Mongol, having taken control of his native Transoxania (now Uzbekistan) by 1370, then launched upon a massive and brutal campaign of conquest, including the invasion of Persia in 1383. At the end of forty years of destroying scores of cities, devastating vast areas of land, and killing thousands of people, he controlled an empire which stretched from India to the Mediterranean. His fighting included a running battle with the Golden Horde. He eventually caught up with the Mongol army in 1395 and defeated it on the Kur River. It never recovered. He has been likened to Genghis Khan, but his campaigns were not planned, he made no attempt to establish rule over his territory, and the barbarity of his attacks had no equal. As we shall see, in 1402 (H4) he went on to further triumph, including a crushing victory over the Ottoman Turks. 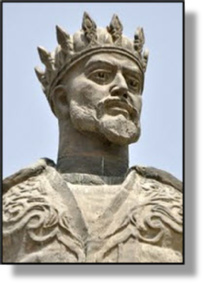 xxxxxTamerlane (or Timur) was a Turkoman Mongol (or Tartar) who in forty years of unparalleled barbarity carved out for himself an empire which stretched from India to the Mediterranean. Born at Kesh in Transoxania (now Uzbekistan) and lame in one leg from birth, he was called Timur the Lame, hence Tamerlane, the name by which he is generally known.

xxxxxHe quickly rose to prominence in the service of the local Khan, and by 1370 had gained control of his native Transoxania. Here he set up his capital at Samarkand and announced his intention of restoring the Mongol empire of Genghis Khan, then divided and rapidly falling apart. He then launched his campaign of conquest which was to leave scores of cities totally destroyed, vast areas of land devastated, and hundreds of thousands of people dead. It is said that, on occasions, he would make towers out of the skulls of those he had slaughtered. In 1383 he began his invasion and subjugation of Persia, and by 1394 he had conquered Mesopotamia, Azerbaijan, Armenia and Georgia. Four years later he invaded India where he defeated the army of the Delhi Sultan at the Battle of Panipat and then captured Delhi, massacring its inhabitants and reducing the city to ruins. 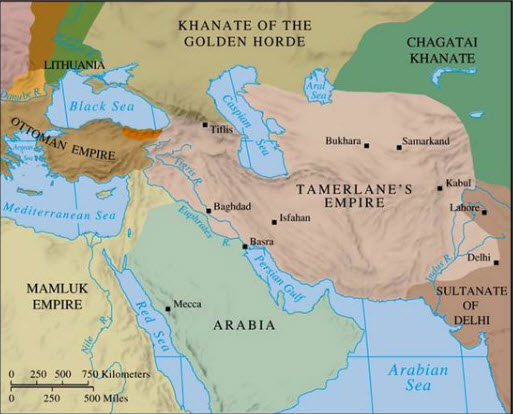 xxxxxAndxduring part of this period he also carried on a running battle with his former ally Tokhtamysh, the khanate of the Golden Horde. A number of times the Horde encroached on his territory, including an invasion of Azerbaijan in 1385 and of Transoxania in 1388, but Tamerlane eventually caught up with the Mongol force and defeated it on the Kur River in 1395. Tokhtamysh gave up the struggle and, despite the efforts of his successor, Edigu, the Golden Horde went seriously into decline.

xxxxxAs a nomad warrior, Tamerlane has been likened to Genghis Khan - whom he falsely claimed as his ancestor - but whilst, like him, he used intrigue, treachery and alliance to good effect, his campaigns were less planned and organised, and he depended much more upon the mobility and surprise of his mounted archers. In battle, he claimed, speed was the secret of success. It was better to be at the right place with ten men than in the wrong place with 10,000. Furthermore his barbarity went beyond that of any other Mongol ruler, and such terror tactics might well account for the swiftness of his conquest. Nor did he attempt to install any orderly rule over the lands he conquered or, at the very least, support local rulers in the carrying out of this task.

xxxxxAs we shall see, in 1402 (H4) Tamerlane went on to further triumph. He invaded Syria and Anatolia and gained a crushing victory over the Ottoman Turks. Few men in history have caused such misery, destruction and bloodshed on so large a scale.

Tamerlane: detail from a statue in his birthplace of Shakhrisabz, Uzbekistan. Map: - the-history-notes.blogspot.com.