xxxxxThe Treaty of Amiens of 1802 (G3b) was but a breathing space. Napoleon was clearly set on further conquest, whilst Britain was anxious to reduce French domination of the continent, especially their occupation of Holland. In May 1803 the war was resumed. Napoleon massed troops for a possible invasion of England, but when Britain formed an alliance with Austria, Russia, Sweden and Prussia, he had to turn his attention eastwards. As “Emperor of the French” - appointed in May 1804 - he embarked on a series of brilliant campaigns. He drove Austria out of the war by victories at Ulm and Austerlitz in 1805, crushed the Prussians at Jena in 1806, and then, following the battles of Eylau and Friedlan in 1807, forced Russia to make peace at the Treaty of Tilsit in 1807. Meanwhile, faced with the British victory over a combined French and Spanish fleet at the Battle of Trafalgar in 1805, he instituted his Continental System, a blockade against British goods designed to bring Britain to heel. As we shall see, the Treaty of Tilsit in 1807 marked the height of Napoleon’s power. He was to conquer more lands and gain more victories, but from then on his Napoleonic Wars were to work less in his favour. 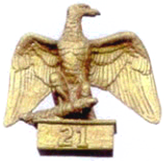 xxxxxAs we have seen, the Treaty of Amiens of 1802 (G3b) proved but a breathing space of fourteen months. Determined to maintain their supremacy, one over the other, neither France nor Britain kept to the terms of the agreement. Napoleon, for example, occupied the Batavian Republic (Holland) and annexed Piedmont, whilst Britain refused to evacuate Malta and restore it to the Knights Hospitallers on the grounds that the French were still holding on to certain Neapolitan ports.

xxxxxThe dispute over Malta, in fact, was the immediate reason for the renewal of the conflict. Relations between the two countries became particularly strained over this issue, and in May 1803 Britain declared war. But the causes for the resumption of the fighting ran much deeper than that. For their part the British were understandably concerned at the extent of French expansion during their revolutionary wars, and the dominant position they held on the continent. In particular, their hold over Holland posed a serious threat to home defence. An independent Holland was a cornerstone of British foreign policy. As for Napoleon, he was not a man to spend all his days on internal reform. As a soldier, and a highly ambitious one, he was clearly bent on the conquest of Europe and, given the chance, of gaining a name for himself as an empire builder. A resumption of hostilities was inevitable. 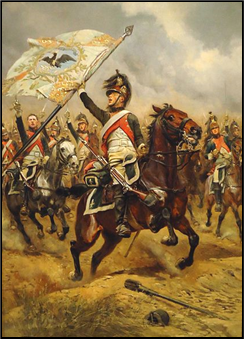 xxxxxWith war officially resumed in 1803, Napoleon prepared an armada at Boulogne to scare if not attack his most persistent of enemies, Great Britain. An army of some 170,000 was assembled but, given Britain’s acknowledged mastery of the sea, it is doubtful whether an invasion of England was seriously contemplated. In any case, in the summer of 1805 (some months before Nelson virtually destroyed a combined French and Spanish fleet at the Battle of Trafalgar), he was obliged to abandon any such project in order to counter a new threat on land - a third coalition between Austria, Russia and Sweden, astutely organised and supported by Britain in April.

xxxxxCharacteristically, Napoleon, in command of a proven army, lost no time in taking on his enemy. Taking the field as “Emperor of the French” - having crowned himself in May 1804 - in October 1805 he outmanoeuvred the Austrians, roundly defeating them at the Battle of Ulm, and then followed this up with a crushing defeat of an Austro-Russian army at the Battle of Austerlitz in Moravia. With the French in Vienna and occupying much of Austria, Emperor Francis II was obliged to sign the Peace of Pressburg in December 1805, giving up all his Italian possessions and handing over Tyrol to Bavaria. Furthermore, in July 1806 Napoleon instituted the Confederation of the Rhine, making himself Protector over a conglomeration of small German principalities, and putting an end once and for all to the ancient relic known as the Holy Roman Empire. Francis II was obliged to renounce his claim as Emperor, but promptly saved his face by assuming the title Emperor of Austria!

xxxxxBut the Confederation of the Rhine had a further, more significant repercussion. Alarmed at the prospect of having Napoleon as a neighbour, Prussia decided to come out of retirement. Having pulled out of the French Revolutionary Wars by the Treaty of Basle in 1795, and stubbornly clung to a policy of neutrality ever since, Frederick William III now took to the battlefield, declaring war on the French in 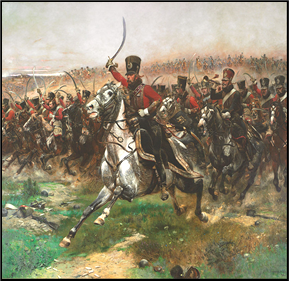 the autumn of 1806. It was to prove an unwise and costly decision. The Prussian army, drilled in the tactics of yesteryear, and mostly made up of mercenaries, proved no match for a quick moving, hard hitting French army which was full of revolutionary zeal. The Battles of Jena and Auerstadt, fought on the same day in October 1806, not only brought about the collapse of the Prussian army, but almost spelled the end of Prussia itself.

xxxxxNapoleon entered Berlin in triumph, and it was here, ever mindful of his maritime enemy Great Britain, that he instituted his Continental System (or Blockade), closing continental ports to British vessels in the hope of bringing the island nation to heel. Then, following an arduous winter campaign, he moved his forces eastward, searching not only for the remnants of the Prussian army, but also for a Russian force which had come to their aid. In February 1807 he met up with both of them at the Battle of Eylau. This proved a hard-fought contest with neither side able to claim outright victory. However, four months later, in a second encounter, the Battle of Friedland, the French won the day and forced the Russians to accept the Treaty of Tilsit in the July. As we shall see (1807), this was an extraordinary agreement and, in many respects, it marked the height of Napoleon’s power. He was to conquer more lands and gain more victories, but from then on the Napoleonic Wars took on a different and, for the French, less favourable direction.

An Outline of the